Many, many pictures from Füchtorf

Unfortunatly I don't have many tractor pictures to post right now as we're still working hard on the event preparations. We're having kind of a drought right now (for our circumstances) and are heavily watering the place and track already. The good thing is, because of no rain we're pretty much done with most of the stuff, just need to put up the electrical powerplants, hook the showers and restrooms and other minor things.
We're ready for spectators / campers from thursday evening on I'd say. Weather forecast is EXCELLENT for the weekend (27°C / 80F and sunshine).

Pictures from Zieuwent from AJ

Tractor Pulling Füchtorf on the 28th and 29th of April

As most of you know, I am heavily involved in the Tractor Pull at Füchtorf Germany, taking place the last weekend of April (which along with my computer crash is the reason for things being slow on here right now).
This year we'll again have two full days of Tractor Pulling with the saturday being our "amateur" day with Stock, Sport and Garden Pulling and the saturday being a little more professional, featuring four modified classes, Pro and Super Stocks as well as Mini rods. We expect several "guest pullers" from the Netherlands, Sweden, Denmark, Switzerland, Luxemburg and Liechtenstein.
Saturday, after some local field stock competition we'll start with gardenpullers around noon. We'll have a full field of modifieds and should have several compact diesel machines, including the Brother's Toy from Holland.
Afterwards there will be an international Super Sport class competition with competitors from Switzerland, the Netherlands and of course Germany.
The evening we'll have big public party inside the barn with DJ and everything where you all can give good, drafted "Pott's Bier" a try.

For sunday I am personally really thrilled and glad about having Stefan Kronvall with the new Wild Thing at our place, as this is the first time, this new twin/triple Hemi machine competes south of Scandinavia. Together with Black Power, Le Coiffeur (problems from Zwolle (ignition timing) and Weseke (old fuel) are solved), Green Monster, Isotov 2 and Cent it's going to be one of the toughest 2.5t mod competitions you can think of at present.
Also the 3.5t class looks pretty neat. While Fox, Black Power, Green Monster, Wild Thing, Erlkönig (with new powerplants mounted), an overhauled Joker and Red Diamond will probably battle for the top positions, there is a couple of nice machines in the lower rankings, that are not going for the top positions, but are a show on their own: Wild Star from Luxemburg, Final Destination (probably the strongest Transmash V12 Diesel Puller at present) and the beautiful Adler for example.
The 4.5t was a litle difficult to get tractors for, but with 9 machines over 5000 hp it's for sure not a bad field at all.

The Mini competition is going to be nice, too: Lambada 6, Mission Impossible, Mr. Rabbit the Ghost Busters, Blue Magic and Hot Head out of the European top league combined with two blown Chevy V8 powered rods, Extreme Rage and Let's Try and the turbo charged Crazy Horse.
In the Pro Stock class we will welcome the Runaway Deer, Snoopy and hopefully the Bad Boys Toy from Holland, but will also have the biggest german field of Pro Stocks ever. The german teams have been pretty busy over the winter!
The Super Stock class is more or less going to be a demo, but for those who like diesel smoke, we've made sure Rowdy can make the price money so Hans Schwaiger has reason to go full boost!
Entry on saturday is 5 €, for sunday 15 €.
Camping is avaliable from thursday to monday with restrooms, showers and electricity.

Due to my computer crash I've lost my web monitoring software and it's set up - so I am currently unable to check for updated websites.
Since I am involved in the preparations for the Tractor Pull in Füchtorf at the end of the month I am quite busy and don't have time to set it all up again right now.
Anyhow, there is some updates on the web:

www.Truckpower.dk has a few new pictures posted.
http://www.seasideaffair.com/ has a report of their first runs with the new tractor at Arnhem (check under Pull reports)
Gepostet von Sascha bei Friday, April 20, 2007 No comments:

And the other track:
Gepostet von Sascha bei Sunday, April 15, 2007 No comments:

The first pictures from Indoor Pulling in GelreDome Arnhem. (Sorry, some are bad quality.)

The Roadrunners have a new website! All dutch but neat!
http://www.team-roadrunner.nl/
Gepostet von Sascha bei Saturday, April 14, 2007 No comments:

One of the greater days of my life!
An Email from Johanna Herlevi in my mailbox with pictures of the new Diesel tuning shop of her family:

Pls find enclosed pics of our new project and workshop.

The workshop "Diesellandia" became ready at the end of January 2007. Pekka and
Matti are there daily, working on cars, mainly MB's, and tractors.

A new Valtra pro stock tractor is being built to be put up for sale. Its debut
will be on May 18 in Lidköping, Sweden.
New pics will follow as the project goes on....

geeze.. 5 days away and now I really have some catching up to do...
Recent updates in the Picasa Galleries:
Christian's Weseke pictures
Reinier's Pictures of the S-Division pull in Meijel
Pictures added to Emil's gallery of building a new bus/hauler for his team
Gepostet von Sascha bei Wednesday, April 11, 2007 No comments:

I have received this Email to help with promoting the Poly Royal Truck and Tractor Pull. So here it goes:

The pull we put on is called the Poly Royal Truck and Tractor Pull and is put on at Cal Poly San Luis Obispo, California. The pull itself is put on by the Cal Poly Tractor Pull Club and It will be held April 21st at 1:00pm.

All the proceeds from the pull go to the Tractor Pull Scholarship Endowment to benefit hard working students in the BioResource and Agricultural Engineering Department and others in the College of Agriculture.

Also, all of the seating (40 sets of bleachers) have been built by the Tractor Pull Club over the past number of years. There is currently enough seating for 4,000 spectators. We expect to host over 50 trucks, modified tractors, minis, and diesel/alcohol powered tractors.

A little change in plans!
I've just bought a new car (can you say 57 mpg?) and won't be home before beginning of next week. I will probably go to Arnhem from here to take pictures and will also try to make it to the brush pull in Erle Rhade the day after.
Gepostet von Sascha bei Tuesday, April 10, 2007 No comments:

I am still up in north germany at my parents place...
Spent yesterday with my 7-year old nephew Vincent in a Farm Museum. Vincent and me took some pictures as we think old farm buildings and machines are cool!

Reinier has been taken some pictures at the test & tune at Stroe!
Gepostet von Sascha bei Sunday, April 08, 2007 No comments:

It's holiday time and I'll be away for a few days, visiting family and check out what's new with the teams in their neighbourhood (they already told me they'll put me to work on diesel stuff.. new experience!)
After I have installed this "visitor locations" tool I have figured we have guests from eastern and southern Europe in here. First of I would like to really welcome you to this website! It's good to see there is interest in this wonderful motorsport on "new" territory.
I have made up a new section on my forum, called "Tractor Pulling Forums in other languages" (linked on the left) - so feel free to leave a notice in you mother's tounge in there. Maybe and hopefully you can find fellow pullers in your country that way! If I have forgotton about your country, just gimme hell with the "comment" feature here (that little envelope below each of my posts) and I'll get that fixed!

To the plan for the next few days:
I can and will update some things on this website from my parents place, but am unable to check for external website updates during that time.
Out of experience I know the holidays can be long and boring, so I would suggest an additional afternoon pulling chat session on sunday afternoon 3 pm (to the chat room).

I wish all of you happy easter holidays and to get stuff done on your tractors. Arnhem is near and Füchtorf and the Euro Cup start very soon after!
Gepostet von Sascha bei Friday, April 06, 2007 No comments:

Klemens and Thommy Mathmann are working hard on their Deutz Alky Burner to get it done for the season. Check out the picture (Bilder) galleries on their website for the latest pictures. Can you say "homemade"?
Gepostet von Sascha bei Thursday, April 05, 2007 No comments: 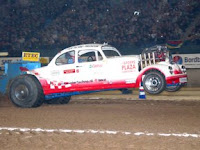 As some of you might know, we are having an "amateur day" at Füchtorf again this year. Besids a full field of Garden Pullers, we already have a pretty nice list of pullers for the sport classes but are still in need of some stock tractor pullers. Sport Pullers are also still welcome.

The rules you can find here.

Our north german (Holstein) maniacs have opened their season, too.
Safety?

Johannes was so kind to put a few video impressions of our local (north west Germany) hot farm class online on myvideo. It's only the second year we run them in our association and most of what you see are tractors built for the 3.5t class, competing in the 4.5t that day.
Gepostet von Sascha bei Monday, April 02, 2007 No comments:

The new MPM Seaiside Affiar modified from Egmond-Binnen/ Netherlands is ready to run!
The beautiful new machine is powered by up to five blown Ford engines and features a pretty unique chassis design. It's first appereance will be at the indoor pull in Arnhem in two weeks and it will after that compete in the 2007 Dutch championships.
Visit their website for a detailed foto gallery and story about how this beauty was designed and put together.
http://www.seasideaffair.com
Gepostet von Sascha bei Sunday, April 01, 2007 No comments:

Pictures of Europe's first AGCO White Farm Stock (no replacement for displacement). If everything goes right, it's maiden run will be at Füchtorf on April 28th.

The tractor is powered by a 6 cil. Caterpillar 640 cui turbo charged and intercooled engine.
Built in the Netherlands by "Morrenhof Handel en Revisie" and sponsered by www.scheepsmotorrevisie.nl