New Fighter chassis in the works

Staab adds a Pro Stock to the stable! 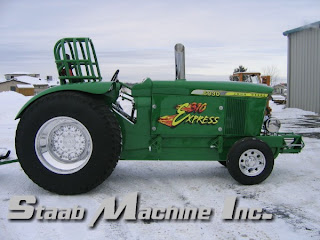 Staabs have been busy and have rolled out a new Pro Stock! Heck of a nice job...just wondering if it has been spoken for yet? Click here on "Staab Machine" for the rest of the photos

A little bit of a problem in the Le Coiffeur Griffon, caused by uncontrolled ignition timing with an MSD 44.
Seriously looking for a pair of connecting rods now ... contact fbartholome@t-online.de
Gepostet von Sascha bei Monday, January 28, 2008 I have just returned home from one of the most different Pulling Team's parties I've ever been to. Some of you might know the "Team Daisy", which is competing with two Deutz tractors in the German sportclass.
Last year they've pretty much shocked everybody on the circuit with a new sponsor on their tractor.
The "Saunaclub Parkschloss Dali (do not click when under 18), jumped on board to help funding the team and put two disks in the backwheels of the "Lady" tractor, with a picture of some nice naked butts...
All year long people were trying to spy the other side of those disks and the going joke of the announcers was, that after 10pm the tractor would run with the disks turned around (but because of noise limitations we usually can't pull after 10p.m. here anyways).
Anyhow - the team won the german championships and that of course means they have to throw a party for their friends out of the circuit.
The invitation arrived in my Email box about 3 weeks ago and I asked where the party would be, expecting a cleaned out barn and plenty of that good beer they brew in that area.
I must say I was puzzled when the reply "at our sponsor" came. - "Oh my god..."
So, yesterday a bunch of pullers out of the north western pulling circuit met at Heiko Behle's farm and then later checked in at a hotel next town.
At around 7 it was time to leave for the club and with two vans we were brought to "Parkschloss Dali".
After arrival we were very friendly welcomed by the boss of the house and a group of beautiful girls in bikinis (or parts of those), who then gave us a tour through the building.
As the Daisy Team members told me, this was the first time for them to see the building from the inside, too as before they only had been there to discuss sponsorship related things. I then asked them, how in the world they got this place to sponsor them. "We've just asked them if they agree on the fact motorsports and beautiful girls belong together..."

Well - the old house - how odd - used to be a ministry school and has been really nicely restored for it's current purpose. In the ground floor they have a wellness area with whirlpool and sauna, as well as a bar with table dance, while upstairs you can rent several different theme rooms "by the hour".
We didn't really plan on that and gathered up in the table dance bar, where we all got free beer and got to see two "dance shows", put on especially for us.
After some more beers, we got a room all for ourselves with an excellent buffet, that probably nobody had expected in this location. After dinner it was back into the bar for most of us, while others tried the whirlpool, did some "social observations" or chatted with the girls, who, even after figuring out our group was not really good for buisiness, were great to talk to and would answer any questions we had.
Anyhow - after more beer, fuel talks and another live show we were brought to another sponsor of the team, the "Willinger Brauhaus" (actually another big club with dance floor - but the girls a little bit more dressed) were we got to try some excellent beer and finished the evening. At the breakfast table back in the hotel the next morning everybody was sure, that this party would stick in our memories for quite a while. The way they handled this tricky situtaion at "Dali" was just simply proffessional and for most of us a "once in a lifetime" experience, that you probably can't make in daily life.
I would like to thank the Daisy Team and all others for a nice evening!
Gepostet von Sascha bei Sunday, January 27, 2008

New directions in Pro Stock Pulling with the Outlaws

Some pics out of our workshop

Quiet before the storm...
Most of the team members are on skiing vacation, but from monday on we'll get busy with the new Green Fighter! Tubes for the rollcage are done, reverser is about ready, too and Matthias has ran the hell out of our CNC mill, building parts for the new tractor. On the side our "Mini Monster" got a serious tune up, after the new trycicle of the Le Coiffeur team beat it in a race. 100 km/h barrier is in danger!!!
Gepostet von Sascha bei Friday, January 25, 2008

Tractorpulling.tv has added some Stock and Hot Farm videos from Putten to their website!
Gepostet von Sascha bei Monday, January 21, 2008

Joachim is busy rebuilding a 4 engine modified micropuller and has documented his work so far with a nice little picture story.
Check the Destroyer website and click on the "workshop" link on the left.
By the way - the first points pull for the Radio Controlled Tractor Pullers will be on saturday, the 26th of April at the Füchtorf Tractor Pull.
Garden Pullers, Stock and Hot Farm pulling will also be part of the day's program on the outdoor track while on sunday an international invitational along with the 1st round for the 2008 german championships will be held.
Gepostet von Sascha bei Monday, January 21, 2008

Don't forget, it's pull chat time tonight!
We have a new chat with a few more options and running more stable than the old one.
DO NOT use a password - just type in name and go.
Gepostet von Sascha bei Sunday, January 20, 2008

US Shots by Eric Prewitt

Eric has posted his shots from the first US pulls of the season.
Gepostet von Sascha bei Sunday, January 20, 2008


The Tractor Pulling Team Wingeshausen is currently working on a twin Transmash V12 tractor for the 4.5t and 5.4t modified class.
The engines are supercharged and should deliver around 1300 hp each.
The rear end is a MAN differential with ZF AP 11 planetaries. Two 11 inch Crower clutches and a Crossbox and transmission, both designed by Martin Ortkrass, will compelte the driveline.
Wheels and tires were purchased from the Le Coiffeur team and the work on the chassis has started. They hope to have the tractor ready for the 2008 season and want to thank all the people that have helped them so far.
Gepostet von Sascha bei Sunday, January 20, 2008 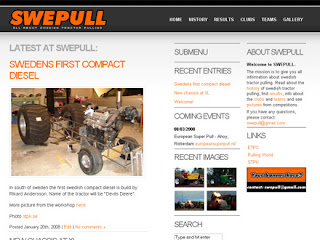 Today is "grand opening" of a new swedish website about tractor pulling.

It´s all in english and will give you short news about what going on in sweden.
There will be results, pictures and movies from the swedish competions.

Honestly...
I took my video cam to Zwolle to try it out.
I put my photo cam on the side to take only ONE run with it (knowing I am not supposed to take videos there - but hey - first chance to try my x-mas present).
Can you say "Perfect timing"?
Gepostet von Sascha bei Sunday, January 20, 2008

With A LOT of thanks to www.whatssmokin.net we could add some Tomah videos to our video page
Gepostet von Sascha bei Friday, January 18, 2008

The Dschinni Team has gotten it's crankshaft done - and now it's getting time to get the engine together.
Check their website for the latest pictures!
Gepostet von Sascha bei Wednesday, January 16, 2008

Some pics by Dirk Meijer from Quambatook down under...
Gepostet von Sascha bei Tuesday, January 15, 2008

that was quick... already back out, but have to go back tomorrow. They've promised me this time I'll be out in time for the weekend, too.
Gepostet von Sascha bei Tuesday, January 15, 2008

I have to go to the hospital again, to get the hose removed. Shouldn't take that long and if I am lucky I can go to Zwolle...
Gepostet von Sascha bei Tuesday, January 15, 2008

After announcing the rulechanges for 2008, all interested pullers can registrate for Eurocup 2008.
The REGISTRATION form is at the ETPC website.
You can registrate direct to ETPC but always inform your national board as well.
Deadline registration, around February 1st.
Gepostet von Sascha bei Monday, January 14, 2008

New association in the Netherlands

Just when you think, things have come together...
The "left overs" of the ITTC and the Powerbreaker competition have formed a new "low budget" association, after the ITTC has merged with the NTTO B-league and the leader of the Powerbreaker competition, Piet Rijnders, died last year.
Check their website at www.itpv.nl.
Gepostet von Sascha bei Thursday, January 10, 2008

Check out www.indoortractorpulling.nl for the list of competitors at the Zwolle/NL indoor pull on january the 19th.
Nice to see some former ITTC pullers at this "hardcore" Tractor Pulling event!
Gepostet von Sascha bei Thursday, January 10, 2008

The PRI Show is the world's largest exhibition of Race Products from Go-karting to Tractor Pulling with thousands of exhibitors showing off the latest equipment used in motorsport.

Ron and Dave spent three days at the show followed by five days back at BMS Motorsports with Ron working on new parts for Just Smoky.

Classes from the 2006 Lubersac EC are added to the video page and the danish championship pulls to the schedule...
Gepostet von Sascha bei Tuesday, January 08, 2008

Holland Blankets is back on board as sponsor of Pullingworld.com for the next season!
Thanks a lot from our end for helping us keeping this website going!
So - if you need a blanket for your clutch, supercharger or transmission, contact Bas Liefting and he'll help you out.
Gepostet von Sascha bei Monday, January 07, 2008

Not only we have been busy with videos, also Tractorpulling.tv has updated and now has the first events of the dutch A-league online.
Gepostet von Sascha bei Monday, January 07, 2008

Some more pics out of our workshop

Dirk working on the differential for Just Smokey, Matthias fixing our "Mini Monster" and Rico putting together the reverser for the new Green Fighter.
Gepostet von Sascha bei Friday, January 04, 2008

Have added some more videos to my new video site. Special thanks to pullingvideo for the additions on "stage6" (more to come).
Gepostet von Sascha bei Thursday, January 03, 2008

Had some time to stop by at the Le Coiffeur and the Green Monster Team workshops to take some pics and videos.
The Le Coiffeur guys were busy putting pistons into their new Griffon and cutting new automotive valves to the right size to replace the original aircraft valves.
New liners have been made and have already been placed into the cylinder banks. So that engine is getting closer to the final assambly.

At our shop things were going slow today, but that's "quiet before the storm":
The tubes for the new Green Fighter chassis will be taken to be laser cut later this week, the last FEM calculations were completed last week.
A new reverser (still the old and trusty style) is ready for assambly, too. Since the tractor is not going to get a 2 speed transmission again, Robert is currently designing a little gear box, that will be added to the crossbox for the 3.5t class.
A set of new tires have been mounted, but have been put in the attic until we need them.
Dirk is working on a differential for a dutch team and Fabian had nothing better to do than repaint a workbench, after he had installed a new tool cabinet yesterday.
Also busy is the Lambada Team: The new chassis rails are done and they are working on new engines for the 2008 season.
For you to follow, they are posting pictures on their picasa gallery regulary.
Gepostet von Sascha bei Tuesday, January 01, 2008