A few pictures from Verl...

Hi!
I'm still busy with moving out and only have limited computer access and stuff, but Vesa from Finland has opened a new Veoh TP channel at http://www.veoh.com/channels/TeamN4 which you should check out for some HQ pulling videos from up north.
Gepostet von Sascha bei Thursday, June 26, 2008

Some pictures from the last weekend

Dan got it going!

You can follow Tomah pretty much live on our partner site www.pullingdepot.com this weekend!
Gepostet von Sascha bei Friday, June 20, 2008

Things on here are and will continue to be a little slow for a while, as I have a new job and need to move near Hannover within the next week. Currently I have no access to my own computer (staying at my parent's place), so things are a little difficult.
With all this I have less time for tractors right now...
Hope things go back to normal by the middle of July.
Gepostet von Sascha bei Friday, June 20, 2008

Hi Folks , we have made a short video from Egtved, Denmark.
As you can see, many had a hard time keeping the pullers on the "right" course
Enjoy
Lidt scener fra egtved
Gepostet von Artrapull.dk bei Wednesday, June 18, 2008 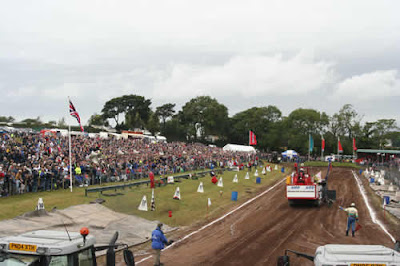 Tickets are now available to purchase on-line for the NWTPC August event at Gt. Eccleston. This event will see the usually spectacular floodlit pull on the Saturday evening with European pullers in attendance, followed by Sundays event , the highlight being the final round of the 950kkg Modified Euro-Cup class. So buy your tickets now and save money. Visit http://www.nwtpc.co.uk/
Gepostet von Tom Beattie bei Tuesday, June 17, 2008

Pictures and results from Denmark 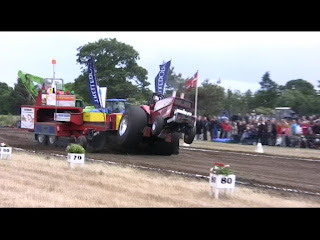 The results from the 4th round of the Danish championship in Egtved.
This time with the sledge " De Stille Genieter " from Belgium.
they had to pull the emergency stop a couple of times, a couple of pullers lost control on the hard track . video will be edited and put on the site in a few days . Enjoy ;-)

Change of locations for 2009 European Championships

Country Channel does it again

The boys at Country Channel have done it again a really good "Short program" from the Ahoy Pull 08 have a look http://www.countrychannel.tv/player.php?channel=countrychannel&program=199709
Gepostet von Tom Beattie bei Thursday, June 12, 2008

some more pictures from Bernay

These were taken by the Coyote Team from France.
Gallery is here
Gepostet von Sascha bei Tuesday, June 10, 2008

Points and Results after Bernay are updated
My camera is still on it's way home (I hope...)
Gepostet von Sascha bei Sunday, June 08, 2008

I am off to Bernay now.
The weather forecast has for luck changed to the better so everything looks perfect for a great weekend of tractor pulling in France!
Hope to see you there!
www.antp-bernay.com
Gepostet von Sascha bei Friday, June 06, 2008

A little bit late but still a report, also published at swepull.com

Finally! After a long winter in the workshop for the teams and a year of lots of work for Lidköpings Tractor Pulling Club it was “Grand Opening” of the new track at the Lidköping Motorsport Arena. A new arena for tractor pulling, folk race (a cheaper form of rally cross) motocross, gocart and RC-cars.This year the sun was shining from a blue sky and everybody was happy!

More...When I visited the arena at 6.30am the first team already had a arrived. When I came back at 3pm there was lot of activity and even the spectators was going to the arena. Totally there was over 6500 spectators at the event.

First out was the 600kg Modified class called “Garden Pullers”.

After the official opening ceremony of tne new track and Lidköping City Pull 2008 it was time for the class 2500kg Modified.

Favourite Stefan Kronvall with “Wild Thing” only pulled 2 meters after problems with the connection from the engines to the rear end, but it was enough for a third place. Second place for “Belsebub” with driver Magnus Andersson that also had some problem with a broken radiator. “Mean Dragon with driver Angelcia Lindqvist was the winner of the class pulling nearly 70 meters.

“Team XL” is still number one in the class Two Wheel Drive. After a Full Pull the team was winner of the class. “Team Pluto” with driver Henrik Sundberg from Lidköping pulled 93 meters and was on second place. Peter Brodde with “Evolution” was ending at third place after two nice pull at 90 meters.

In class Pro Stock there was competers from Finland, Denmark and Sweden and the foreigner teams was in the top. Winner was legendary Pekka Herlevi from Finland driving “Sigma Power”. In first pull he did only 81 meters but in the second pull he did was one of the most powerfull pull I ever seen and he did a nice full pull. On second place was Danish “John Deere” with driver Rasmus Höjen and at third place was “Caesar” with driver Matti Herlevi. Best of the swedisg tractors was “Ooh My Deere” with driver Rolf Persson on sixth place.

In the class 3500kg Modified “Team Cougar” with driver Robert Andersson was the winner with a pull at 88 meters in the Pull Off. “Fox” on second place and “Wild Thing” at third place.

“Blue Griffin” with driver Jesper Lundqvist was on fire, and after the fire the team find a hole in the cover for the compressor. Swedens first alcy-burner “Silvia” did there first pull in Sweden. It was a nice pull but it ended outside the track at 50 meters.

The swedish Monster Truck “Thor” did a short but nice show running over cars and a caravan before the truck was broken.

Only two tractors was competing in the 950kg Modified class. Winner was “Nasty Toy” with driver Emil Roth and Per Nilsson driving “Burning Baby” at second place.

At 11pm it was time for the last class 4500kg Modified with expectations at Paul Heistermann from Germany with the tractors “Kiepenkerl” and “Dragon Fire”. There was no Full Pull in class and the winner was Fox with a pull at 98 meters, second place “Cougar” at 97 meter. “Kiepenkerl” at third place.

Paul Heistermann tried two times with “Dragon Fire” but didn´t reach more than 25 meters. But it is a fantastic tractor Paul and his friends has build and I hope a will see the tractor again than running well.

After all this was a great first evening at the new track in Lidköping and I look forward to Lidköping City Pull 2009!
Gepostet von Mikael K bei Friday, June 06, 2008

Hi!
I just want to let you know that both Swedish sledges also are inspected and have recieved their licens!

A little bit about Made

Just coming home from the shop, I still want to say a few words about Made.
First of:
It has been an excellent pull on both days, and everybody who did not attend both days really missed something.
I was very pleased to see the grandstands pretty much full on both days and I think the spectators got their money's worth watching the show.
The entry fee at the gates was very reasonable, the place in good condition and I can't think of any dutch pulls that are overall better than what was put up there last week.
The people in the Made area in my opinion are a very friendly breed that just like to take it easy and welcome everybody. I wish the same could be said about some of the other dutch pulls, where the spectators, drunken like 100 russians, on their way home have nothing better to do, than damage the cars and trucks of foreigners.
What I found a little bit sad, was the use of the Keep Moving sled at track #1 on sunday. I can understand it being used at the dutch A division because of all the sponsor logos and it being a sled owned by the association, but honestly, that thing belongs into a museum. How nice sleds actually can work could be seen on the two other tracks the whole weekend.
This is nothing against the sled crew as I think they did a good job in the general set up - but with bad tools the best men can't do a good job.
The other thing that I have noticed is the quality difference of the three tracks. I know the center track is just "local dirt" and the right hand #1 track is made out of special dirt that was hauled in from far away - but the center track keeps beating the right hand one for two years now, seen over both days.
The right hand one can be a good track, when worked by professionals - but unfortunatly those must have left north on saturday night - and that's how the track conditions looked like.
Funny thing though was, there was excellent track personal on hand - one taking care of the center track and another crew just speaking a different language and supposed to operate the "spare sled".
Back to positive things:
I was pleased to see the competition of the former ITTC guys combined with the B-Division. They really put on a great show together, and the "old" ITTC sled, despite it's rather low classification by the ETPC because of the way it is constructed, really helped putting on a great show with the Pro Stocks on saturday.
I have spend a lot of time with my team ( I am back to track crew for now) and with the guys around Tony Bruegger, so I cannot give you a complete report of the event and the actual things that went on in the competition, but Made really has the potential to become the best event in Europe if we all work together a little more and forget about rivers, borders and "we're better than them" behaviour.
Gepostet von Sascha bei Tuesday, June 03, 2008

Some results of Made
Gepostet von Sascha bei Tuesday, June 03, 2008

Made pics of my buddies and me
Gepostet von Sascha bei Monday, June 02, 2008

For those who havn't seen it yet...


That's the first time I have seen a tractor running over parts of it's block and the cylinder head....
Gepostet von Sascha bei Monday, June 02, 2008

Pictures of this weekend 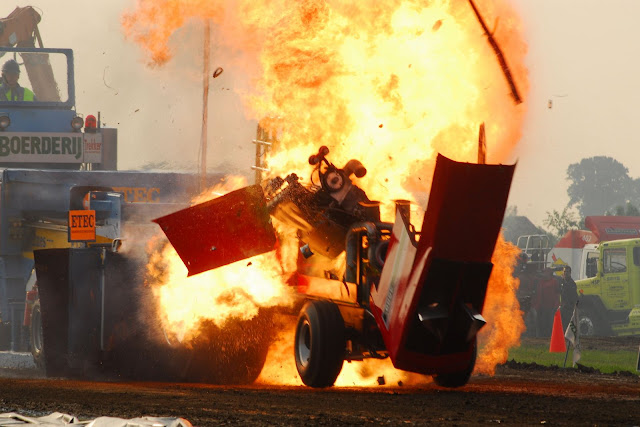 After spending sunday evening along with some of the British pullers at Made (WHAT AN EVENT!!!), I went home today... then stopped by at the workshop (we need a WAY faster ratio in the Green Monster) and have just arrived home. So sorry for the delay:
Here's pictures of this weekend:
Made - Wilco van der Peerle
The Explosion of European Maid by Christian Brocksch
Made - Klaus Hünting
Burlington - by Tim
I've brought some more by various photographers on my mobile HDD - will get to work on them now.
Gepostet von Sascha bei Monday, June 02, 2008

If some of you were wondering why the De Stille Genieter sledge from the BKTV was not a Made, Well it and its team was over in the North west of England for the first pull of the NWTPC A short report and links to some video's is up now on http://www.tractorpulling.co.uk/ have a look
Gepostet von Tom Beattie bei Monday, June 02, 2008