Team ***** have been possible welcome a new sponsor.

This was a submission to this site. I prefer FACTS over assumptions though?!

before you get bored

Friday - and nothing new to tell?

Two days and no news...
Well, kinda. There is some to see in the introduction of the 2009 Euro Cup competitors, as the Breaker guys from Norway told me they will bring the tractor out with two Keith Blacks in the 2.5t modified class.
Then tomorrow is the big "meeting" day in Germany (which is why I am a little busy right now, along with doing some promotional stuff for our pull). There really have been some huge discussions about the future way of pulling in Germany and I think the meeting tomorrow won't be boring at all (5.4t discussion)!
Let's see what people come up with tomorrow!
Have a good weekend!
Sascha
Gepostet von Sascha bei Friday, February 27, 2009 No comments:

Are our friends in the US starting to see the light?

There is a pretty nice discussion going on at the PullOff forum about the future of Pro Stocks.
Feel free to take part!
Gepostet von Sascha bei Wednesday, February 25, 2009 No comments:

Rudy is currently working heavily on his picasa gallery.
Check it for a load of pictures from last season!
Gepostet von Sascha bei Wednesday, February 25, 2009 No comments:

Work in progress at Cougar Team 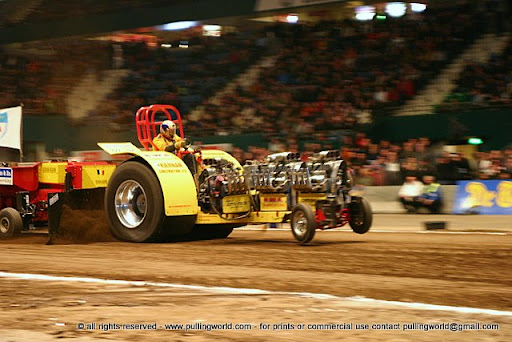 The snow is melting and temperatures try to rise, time for more tractor pulling in 2009!
In less than two weeks the Ahoy Stadium in Rotterdam/Netherlands will again be filled with action, noise and fireworks.
The list of competitors in the meanwhile looks pretty good again, so they must have stepped up the plate a bit lately.
With Show no Mercy of Bruce Slagh, another guest out of the NTPA's unlimited class will help with the show, so expect it to become a great day's entertainment!
If you have not yet booked your tickets, it may be time to do it now, as the last indoor pull in the Netherlands was sold out by the time of the event!
Further info and the link to the online ticket counter you can find on their website at www.europeansuperpull.nl

A week later there will be some outdoor pulling at Loosbroek with trucks, stock and hot farm tractors. More info about that event can be found at www.slippendwiel.nl

Then on the 20st and 22nd of March it's time for the dutch S-Division (Stock and Hot Farm) guys to pull indoors at Nijkerk / Netherlands.

The week after, on the 29th of march, it's time for the Germans to start their season at Borken-Weseke, right on the dutch/german border. This pull in the past few years has offered good competition with teams from north germany and the netherlands, that was well worth watching. Also it's the first chance of the year, to see the big modified tractors on a full length track. Combined with the big boys, the Garden Pullers are giving a few demo runs in the morning, and the local 4,5t Hot Farm Teams will have a qualification run for the German Finals later this year.

April will again be packed with highlights as Arnhem and Füchtorf (Expect a HELL of a Griffon show along with a superb 2.5t mod) coming up!

So - time to plan ahead, get your lawn chairs back out and while on the road, enjoy the low fuel prices!!!
Gepostet von Sascha bei Tuesday, February 24, 2009 No comments:

20/02/2009: Pulling Tour 2009 (Netherlands)
During the past week, a part of Hue Pulling Team has made a trip to meet some V12 Dutch teams. It was as we had hoped privileged times and intense exchanges. We have learned a lot from these meetings. They will undoubtedly serve to advance our own mechanics. The changes that we know will be undoubtedly related to those encountered during this week. We will maintain trade with these teams that we welcomed as friends. We meet again to "Ahoy". And perhaps they will also visit us in the future.

To read the next www.huepullingteam.com and pictures on our Picasa album.

I finally found the time to finish the introduction of the British competitors in the 2009 Euro Cup series. If you want additional info about your team placed there - let me know!
Gepostet von Sascha bei Friday, February 20, 2009 No comments: 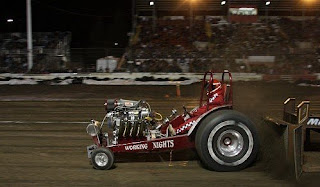 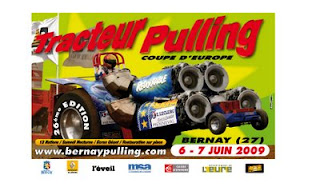 I have spent most of the day trying to fix my broken laundry washing machine (damn thing), and trying to keep up with Emails (I should start to charge for technical advise - I'd get RICH) and trying to find out the contact details of a guy in Arizona who seems to have screwed us over 3 Allison accessory housings.
Anyhow - had a bit of time to start work on the introduction of our British competitors in the 2009 Euro Cup series. Unfortunatly I didn't get it all done yet, but pictures of them all are there by now.
Thanks to Ted for sending me the list and team locations!

To the people from Emmeloord

I had to delete your news post because it wasn't english and would not be understood by the majority of our visitors. Feel free to post again in english!

More Pictures of the new Fox 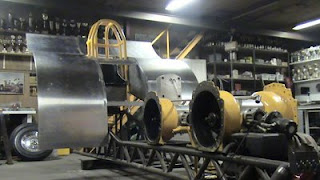 Hallo.
The new tractor make progress, we are now done with the fenders
and they are at painter, see more pictures under:
http://uk.teamfox.dk/149-145-winther_2008.htm
Team Fox
Gepostet von Sascha bei Wednesday, February 18, 2009 No comments:

For our american friends

I am sick at home again - doctor told me to stay home to not infect the others at work, so now I am bored.
Since I just got the list of german teams going to run this year's Euro Cup and because of an MASSIVE interest for this site (or EU Pulling) from the US lately (guess I have to thank Sjors and Lucien for that) I thought I should rework my "Euro Pullers" info, which I took off a while ago.
So people who are not familiar with the European circuit can get an idea about the who is who.

I have figured though, that without much help from other areas of Europe it's plenty tough to keep info about all tractors up to date (in fact keep every tractor on here).

I will concentrate on introducing the guys that will pull in the Euro Cup this year and I would be VERY glad if teams from other countries that have signed up (and also those who haven't) would send me some additional info about their operation, so I can consider it in future articles / introductions. I cannot inform about teams on here, I don't know. Don't bitch if you are not in - send info!!!

Anyhow - here's the result of tonight's work, an introduction of the German teams in the 09 Euro Cup

The Blue Leader Revenge of the Bertelli Pro Stock team, Italian vice champion in 2008 with a New Holland T series.
Here is a duel video - like a comparison test! 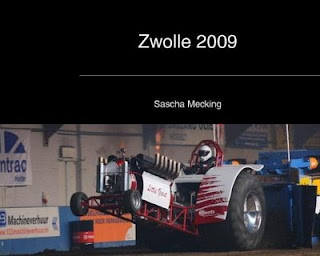 Got the picture book from Zwolle done and it's now for sale by and on lulu.com

Uncle Sam into the sand pile

Butch Krieger says it all!

Check here for the full results.

History in the making

We have to mark yesterday in the calender of tractor pulling history.
Lucien Keulers, a dutch guy, won a PS session at the NFMS!!!

The results link below will get you the actual results, too. 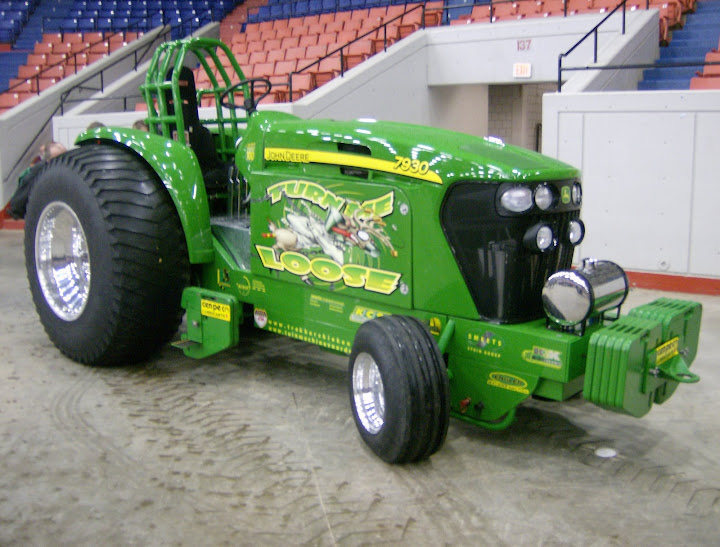 Erik is doing a good job out there and has started his picasa webalbum with NFMS pics
Gepostet von Sascha bei Thursday, February 12, 2009 No comments: 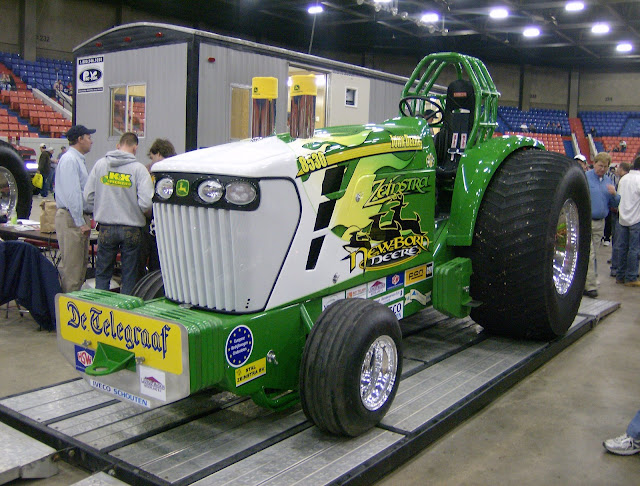 Everyone who has watched a motorsport event dreams of personally gripping the steering wheel of the vehicle given the checkered flag. There may be a chance to live that dream at the West Coast Nationals tractor and truck pull Feb. 10-11 at the Tulare County Fairgrounds in Tulare, Calif.

However, don't bother asking the owners of the multi-engine, blown, fuel-burning monster tractors that make the ground shake like a 7.5 earthquake when they manhandle a 60,000-pound sled 300 feet without bogging down. Those rides are not for novices. 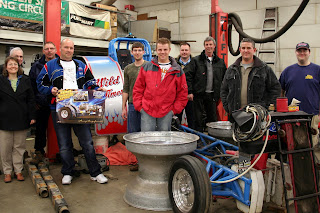 The submit news button still doesn´t work on my computer!

(Try connecting your Email program with your browser. It will do wonders!)

I have the following news:

We have made an english language button on our website; check it out. www.tml-pulling.com

Bertus new toy in the making... 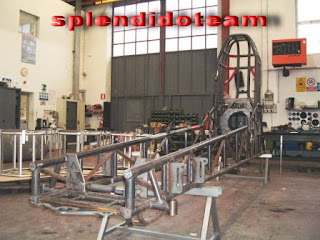 Hi Sascha
some news from the site of the Splendido Team www.splendidoteam.it
greetings and thanks
Gepostet von Sascha bei Saturday, February 07, 2009 No comments:

The Hot Chili Team around Holger Lang has decided to run a full season in 2009, after just random participation in the last couple of years.
Since they didn't want to rely on their old Arias engine, they've invested into a new engine, a Keith Black Hemi to be a little more specific.
Who would have thought Glynn Gunther's old machine would ever be powered by a Hemi?
The Arias engine was sold to Domenik Eisenmann, a former Garden Puller who is currently getting a new mini rod built with substantial help of the Joker Team (who btw are also busy with a complete rebuilt of their mod tractor).
Both minis rods are supposed to be out at Füchtorf on the 26th of April.
Gepostet von Sascha bei Friday, February 06, 2009 No comments:

Updated homepage from the Truckpower team.

You can see updated status and new pictures on www.truckpower.dk.

Since the tractor pulling community is short on news I need something to keep entertaining myself.
I think you'll like this, too!
For those wo don't know it yet, check out Top Gear!
Gepostet von Sascha bei Wednesday, February 04, 2009 No comments:

Something different from Italy?