A 4.5t Mod final from Italy

Some more from Bryne

After some HEAVY spam attacks in the last few days, I have changed the Email address to send the news to:
If you send an Email to pullingworld.postenglish(at)blogger.com it will go online on the website. You can attach pictures to those emails and they will show up in the post, too.
Picture links or pictures inserted in the EMail do not work.

Some pictures from the weekend

Here you have a foto of another big bang by European Maid at Wierden. I send it to you in max resolution maybe you need to resize but I leave that up to you.

Do you want to compete in Bernay ?
For the first time, we organize a standard tractors competition in Bernay (Saturday at 14h00).
The tractors will be separeted in 3 weight classes : 6 tons, 8 tons and 9.9 tons.
We would be happy to have some tractors from Belgium, Netherlands or other countries.
You can find the rules and registration on our website :
http://www.antp-bernay.com/boutique/fiche_produit.cfm?ref=TRACTEURSSERIE&type=8&code_lg=lg_fr&num=0
Best regards
ANTP (Bernay's organisation)
Gepostet von Sascha bei Monday, May 25, 2009 No comments:

Some News from Norway

Finally some internet connection and time.


Track was A KILLER after 20m
Demo run of the Green Spirit Twin ended with a broken rearend and a front wheel broke off, too.
They are now fixing it.
Guess the dutch board is full with results already. Time for BBQ now...

Third round of Danish Championship 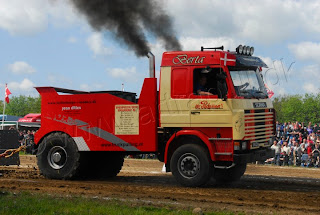 Hi Folks
Yesterday it was time again for the 3rd round o the Danish championship.
It took place at " Allingåbro motor festival" and they had nice weather and many spectators.
"Berta" a danish truckpuller had made a little event and got 8 truckpullers from Holland to visit Denmark.
The crowd loved it and so did we, thx very much for making the trip to Denmark
Pictures are online with the results
video is being made an will be online latest tomorrow
Have a nice sunday ;-)

Results are here!
Photos are here

For the second year "Lidköping City Pull" was held at the new
arena in Lidköping. The weather forecast looked good but unfortunately
we had some rain this evening. 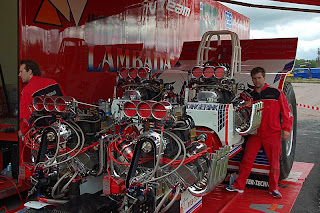 This years big happening was the 4500kg Modified euro cup class.
It was really nice to walk through the pit and see all the teams
from Holland, Germany and Denmark. From Belgium we had the Mariman
family and theirs Volvo BM 810. 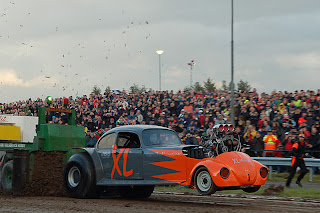 Mattias Nilsson "XL" was the winner in the class "Two Wheel Drive".
Henrik Sundberg "Pluto" on second place. Evolution was disqualified
after running of the track. 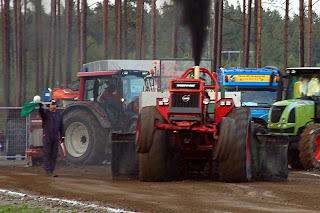 The Mariman family showing of in the Pro Stock class. This was the second visit
for the Marimans in Lidköping. Bart Mariman "Red Fire" and Herman Mariman "Red Rose"
both did Full Pull and Bart was the winner, Herman on second place and swedish
Richard Franzén "Maja Peraja" on third place. 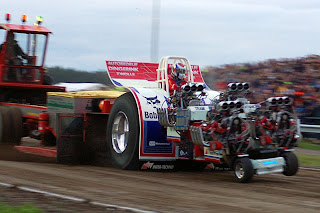 After some changes in the program it was time for the 4500kg Modified Euro Cup.
First out was Hans Zuurbier "Whispering Giant" and he did a nice very silent Full Pull.
Next tractor was "Green Spirit IV" who did a nice pull but went out of track
and was disqulified. "Iwan" from germany also did a very nice pull, went out of track
and was disqulified. Willem Dingerink "Intertechno Lambada" run fast and reached Full Pull
quickly.

Danish Martin Larsen "Fox" is very popular in Lidköping and did also a Full Pull.
The only team from sweden was Robert & Fredrik Andersson "Cougar", Robert was driving
and reach Full Pull. They had some problem and didn´t came to the Pull Off. 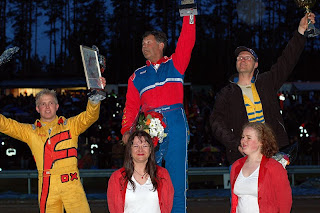 Anders Flogård drives the monster truck "Thor" and did a nice show. "Thor"
is the first european monster truck that is a part of "Monster Jam" 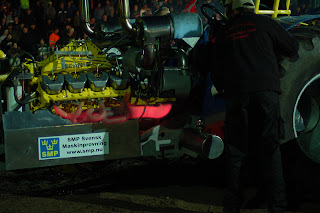 Finally we had 3500kg Modified. A little bit late, dark and wet but still with
lots of spectators Stefan Kronvall "Wild Thing" was the winner. Daniel Svensson
"Återfallet" on second place, Markus Korneliusson "D-Power" on third place.
"Cougar" was disqulified.

We had a rainy evening but still a good show from all competitors and a fantastic
audience. Thank you all!
Gepostet von Mikael K bei Saturday, May 23, 2009 No comments:

Hi out of the Green Monster Truck!
It's about midnight and we are now on the long haul to Norway.
Pull was wet, but track was very ok for the circumstances.
First the results of the 4.5t mod:
1. Lambada - FP in Pull Off (110 m or so)
2. Whispering Giant
3. Fox (broken transmission)
4. Green Fighter (broke a fuel pump)
5. Couager (nice FP - but 5th engine wouldn't start for Pull Off)
Iwan & Green Spirit both out of bounds

I have problems with the internet connection, so more tomorrow!
Gepostet von Sascha bei Saturday, May 23, 2009 No comments:

Check my new URL www.schizo.de.tp for my picturs from Wierden (NL)

Tractor Pulling in Wierden (NL) am 21.05.2009 all pictures © by Stephan Görtz http://www.schizo.­de.tp Verwendung der Photos nur mit meiner ausdrücklichen Erlaubnis!!! Alle Photos sind auch in höherer Auflösung verfügbar. Do not use or download any pictures on this page without my permission!!! All pictures are also available in a higher resolution.­ mailto:stephangoertz@­web.de
Gepostet von Stephan bei Friday, May 22, 2009 No comments:

If everything is going our way tomorrow, we will be able to show live pictures from Lidköping City Pull 2009 on our website http://ltpc.se Today we did a test and you can find it here: http://bambuser.com/channel/LTPC/broadcast/152493 It´s in swedish but tomorrow I will make clips in both swedish and english. You can also see the clip below:

Standing in Kiel harbour in heavy rain, waiting to get on the ferry.
Wierden is about through, results can be found at:
http://www.baspro.nl/glenndylan/default.htm
Gepostet von Sascha bei Thursday, May 21, 2009 No comments:

Hope the trip to the north is fine, enjoy.

On checking the “Redoutable” photo’s for 4 or 5 turbines, I’m little confused how they configurate the lower middle motor since there is hardly space for the exhaust, due to blocking by the upper motors which are approx. 15-20 cm’s backwards located (let’s keep the driver in mind as well). Further the 4 motor photo shows clear cross support in the area where the 5th motor is located on the other photo.

Why this message, team Burning Madness came across similar difficulties in the design of their new 5 engined puller.

Would you be so kind to post this on your site?

I am going to bed now, because us saxons are going to visit the vikings tomorrow...
Wotan meets Odin so to say.
Gonna be great fun.
Will see how much internet connection I'm going to have up there to publish some news and a few shots.
Gepostet von Sascha bei Wednesday, May 20, 2009 1 comment:

And the danish brother

Similar concept as the De Jong Special below. The new Ghost seems to work now, too!
If anybody wonders what's so special about these twin V12 machines: They only weigh 5500 lbs / 2.5 tons.

De Jong Special with a set of new tires, borrowed from the Woody Woodpecker team. NO bouncing!

Hello, I'm from the Rocky pulling Team from the Netherlands. We are
working on a poster to give away (=free) on the different pulls. I've
been experimenting on shooting some pics of myself on the last Pull in
Stroe. Unfortunately i am not satisfied...I'm not a professional
photographer:-) So I came along the picture as attached. The picture
was taken bij AJ. Is it possible to use this picture for our posters
(594x420mm) in the highest possible resolution? I hope to hear from
you soon.

Some more pictures from Italy by Valeria

After the Le Coiffer is fixed again (replaced the blower shaft) and ran yesterday night, it is still a busy week.
Today we loaded the Green Fighter and Monster for the trip to Lidköping and Byrne.
At the Red Painter Team they are trying to fix all the breakages from Seifertshofen (reverser and some drive shafts) so they can also make it north to Byrne.
We'll head north on thursday morning....
Gepostet von Sascha bei Tuesday, May 19, 2009 1 comment:

Tractor Pulling am 17.05.2009 in Seifertshofen, all pictures © by Stephan Görtz http://schizot.­­blogspot.com Verwendung der Photos nur mit meiner ausdrücklichen Erlaubnis!!! Alle Photos sind auch in höherer Auflösung verfügbar. Do not use or download any pictures on this page without my permission!!! All pictures are also available in a higher resolution.­ mailto:stephangoertz@web.de

Check out www.tractor-pulling.de by Mr. Joe for pictures and Video from Seifertshofen.
Gepostet von Sascha bei Monday, May 18, 2009 1 comment: