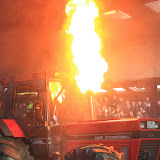 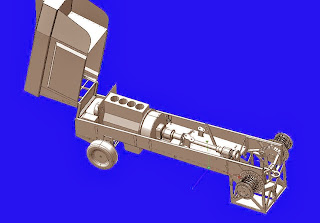 Now that the old Legend is sold to the new owner it's time to spread some news about the new compact diesel Roland van Dongen is fabricating at the moment. The new compact diesel from Roland van Dongen will be made 80 % out of Alluminium components to save quite some weight. Since the compact diesels only may weight 600 kg included the driver, every saved kg counts. As a result of all the alluminium components there should be an extra 30/40 kg available on the front end. The tractor wil also be fitted with a type of gearbox with steps of 8 %. An  'optoerbak' as it's named in dutch. As a result of the box the wheels should reach a speed of 150 km/h at 8000 rpm's! The team says it will start with a wheelspeed of about 110 km/h and see how everything works and then, when everything is working as it should, slowly building it up. We are looking forward to the end result. 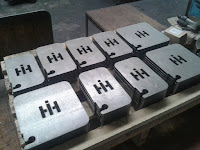 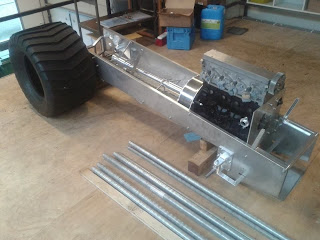 some news from the Screamin´ Bobcat workshop

The first start of the new Double Screamin´ is planned for the 25th of January 2014 in Zwolle, Netherlands.

For further informations and pics of the new Double Screamin´, check here: www.facebook.com/screaminbobcat?fref=ts

The Dutch Tractor Pulling Organisation, NTTO has bought an Ironman sled by Vaughn Bauer in the USA.
The sled will arrive in the Netherlands with both tractors from Adam Bauer (Cross Threaded  and Iron Toy) a few days before the 15th of March 2014 at the 36th European Superpull in Ahoy, Rotterdam.
Gepostet von Kevin bei Monday, December 23, 2013 No comments:

The Hot Head Pulling Team from Germany, are buildinga new Mini Rod at the moment.
What the news, what is different to the old chassis? The new one,has a 42CrMo4 chassis, the driver's position is more forward and the center of gravety is lower. The team hopes to ger a better balance with the Cepek tyres with those changes. The rear axle is newly constructed and lighter. The new wider carbon fenders are lighter than the old GFK fenders. Also, the tractor gets a gearbox and a new V8 engine with a few hundred horsepower more.Which new V8 engine the Team will use, isn´t sure at the moment.

For further information and pics of the new Mini, check here: http://www.team-hothead.de/

The Gators Team from Denmark, are building a new modified tractor at the moment. The team will only compete in the 2.5t Modified (Light Modified) class with this modified tractor powered by 2 supercharged Rover Meteor V12 tank engines. The tractor gets a new wedge style chassis, a set with new Puller 2000 HP tyres and a new Humco rearend. The Rover Meteor tank engines get some bigger valves and new cams in the cylinder heads. Also the engines get some special made pistons (made by Team Gators). The 2 engines are supercharged, maybe with Pro Chargers, the same as Gompie´s (Dutch Mini Rod) Rover Meteor V12 engine. The Gators Team are building most of the parts for the modified tractor in their own workshop and also make parts for other teams in Denmark. The Danish team has a vision, to become one of the strongest tractors in the 2.5t Modified class.
The Team hopes to be ready with the Modified tractor in 2015. For the first season in 2015, it is planned to only compete in the Danish Championship and in 2016, it is planned to also compete in the Euro Cup.

For further information and pics of the new Modified project, check here: https://www.facebook.com/pages/Team-Gators-Tractor-pulling/422848981085695?fref=ts 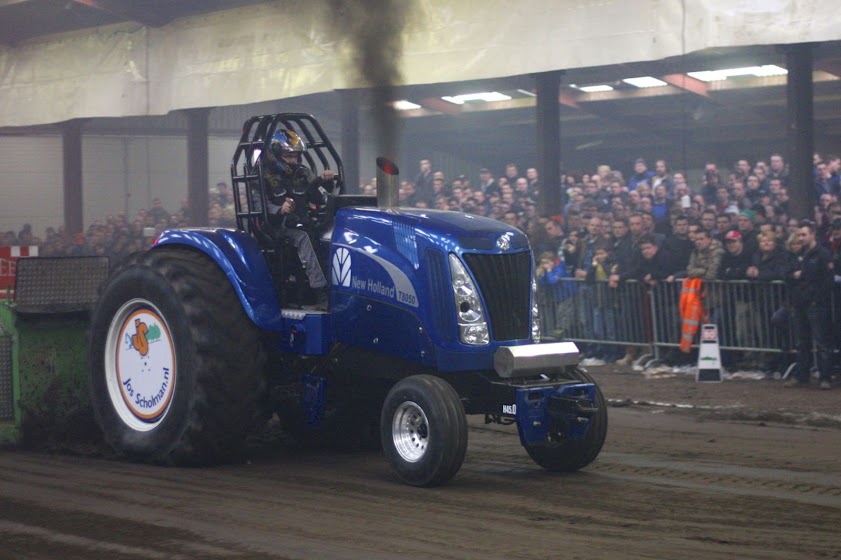 The Mini Rod called ,,Wild Toy´´ gets a new chassis for the 2014 season. The team from Denmark, bought the old Now or Never tube frame with the old Cepek tyres from Daniel Hollmann in Germany a few weeks ago. The Wild Toy is powered by a blown V8 KB Hemi engine.

The new Flying Hawk modified tractor is powered by 2 Continental V12 tank engines on methanol. The 2 engines are supercharged with F3 Pro Chargers. The modified tractor got a new Domex wedge style chassis with Puller 2000 HP tyres. The rims of the Puller 2000 HP tyres come from Northern Sheen in Canada.
The team from Germany, will compete with 1 engine in the 2.5t and with 2 engines in the 3.5t modified class in the German championship next year.

Mitas All or Nothing at the NFMS Pull 2014 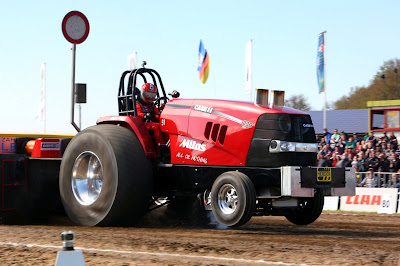 The Interaction Team from Cadzand, in the Netherlands, will compete with their Case IH Puma Super Stock called ,,Mitas All or Nothing´´ at the 46th NFMS Pull in Louisville, KY. The Dutch team will compete in the Super Stock Alcohol class on the 13th of February 2014.
Gepostet von Kevin bei Wednesday, December 18, 2013 No comments: 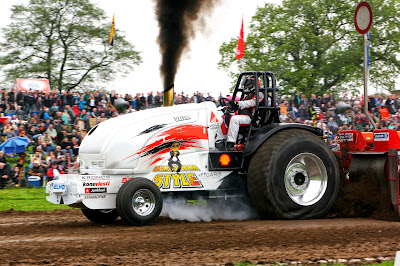 The finnish Valtra Pro Stock tractor called ,,Gangnam Style´´ from the Herlevi family was sold to Norway.
Who the new owner is, isn´t known at the moment.
Gepostet von Kevin bei Wednesday, December 18, 2013 No comments: