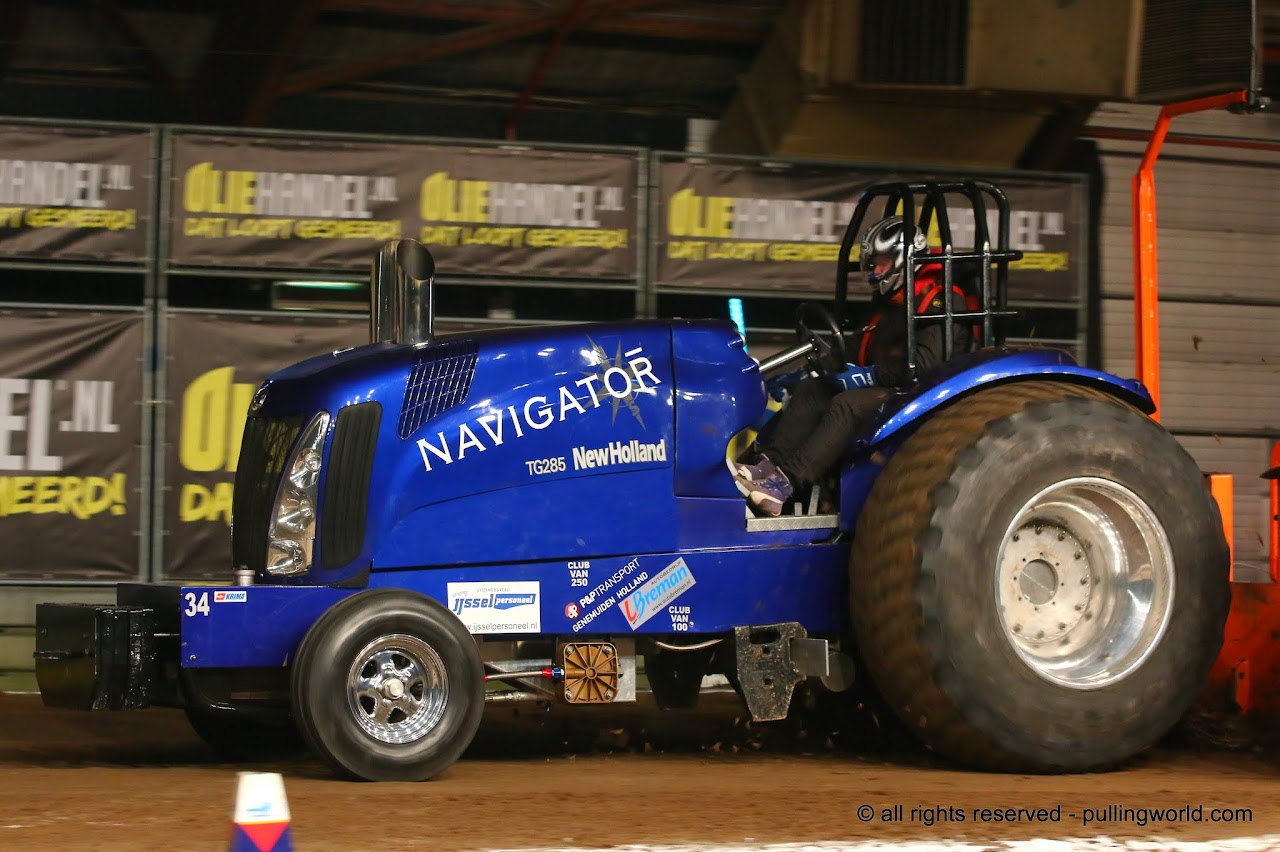 We have reported in 2016, the Swedish Super Stock Tractor called ,,Silvia+´´ of Reinhard Stefansson was sold to a new Team from the Netherlands. Martin de Leeuw from Genemuiden, in the Netherlands is the new owner of the Tractor and running in the Light Super Stock division. He purchased the New Holland TG285 without the engine from Sweden. The Silvia+ wedge chassis was built in 2005 by the Swedish Team himself and received a homemade steel rollcage, a custom built hydraulic power steering and a shorted Rockwell rear axle housing. The hood and fenders of the ride are original off a New Holland TG285 Tractor.
The Rockwell rearend has a original Rockwell center section with a billet aluminium diff, a Rockwell ring and pinion gear and original CAT planetaries carrier housing with CAT planetaries. The rear wheels on the vehicle are a set of old 24.5 x 32 Firestone Puller tires with Midwest aluminium rims.
The new Light Super Stock also got a Profab 3 speed transmission with a homemade driveline, a van der Waal Pulling Parts centrifugal clutch with a VSP (Veldhuizen Special Products) fly wheel and a Browell steel bell housing. 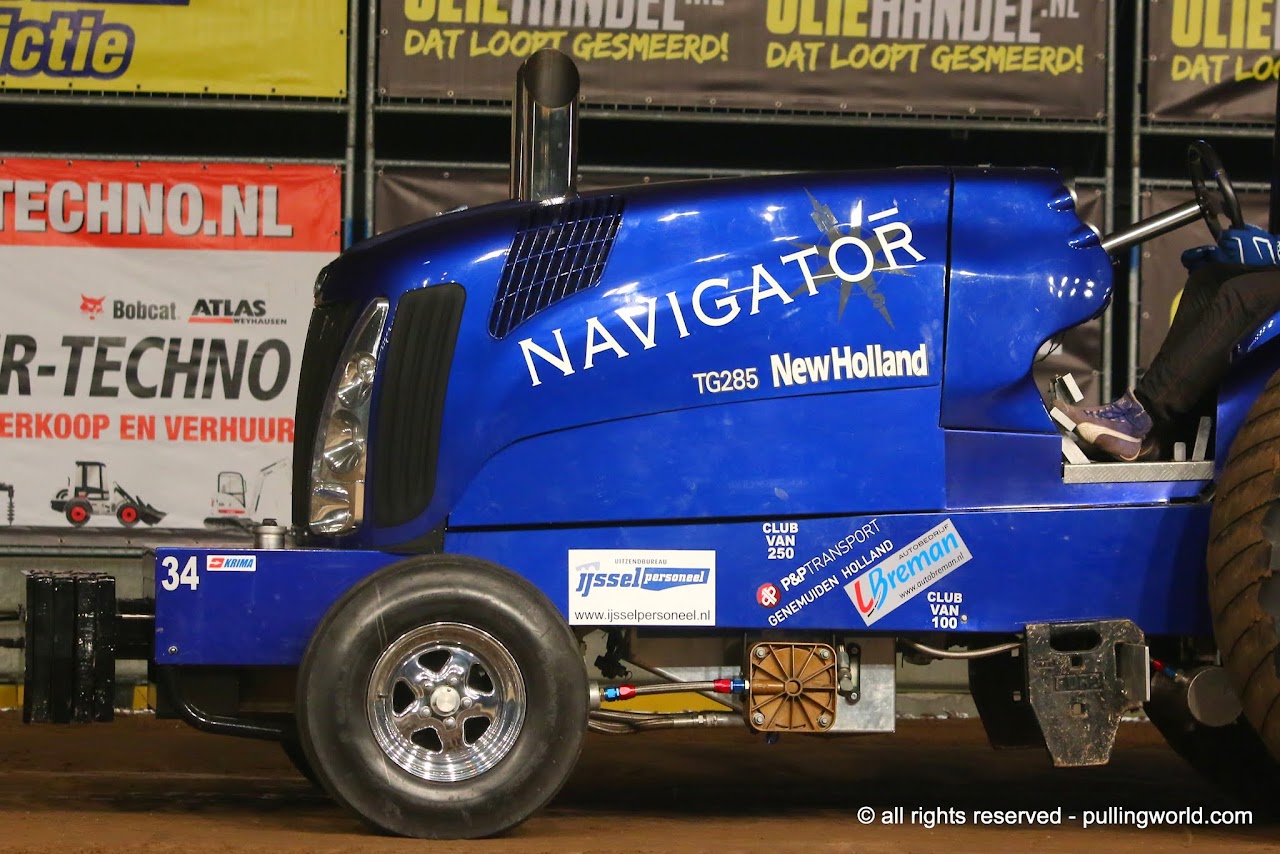 The Navigator is powered by a 6 cylinder Powerstar engine with 7.6l capacity on alcohol fuel.
Martin purchased the complete engine from the Blue Thunder Pulling Team from Tonden, in the Netherlands. The power plant has a New Holland Power Star engine block with a modified NH Powerstar cylinder head, a camshaft from Jan Burggraf (New Generation Pulling Team), titanium valves, a billet crankshaft with billet aluminium rods and pistons, a custom built intake and exhaust manifold, a billet Holset HX82 turbocharger, a VSP alcohol fuel system with a VSP fuel pump, a 2 stage oil pump, a MSD 8 ignition and a Racepak data logger.
The new Team around Martin de Leeuw got a lots of help from Bram Kools (Interaction Pulling Team) during building time and the first passes. The Dutch Team had a great season with no major damage. Sometimes they had the idea that they have made progress, but after a run it turned out, they had to start all over. The Navigator Pulling Team learned a lot about the track and the machine itself. They have made the right changes to the setup halfway through the season. After the last changes to the setup, before the Indoor Pull in Zwolle, they had the idea and made the right decision. This was the best run of the New Holland so far. Martin and his Team are looking very positive at the current season and hope to compete in the top 3 of the Dutch Championship. 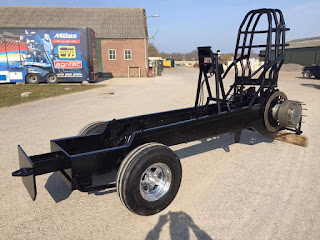 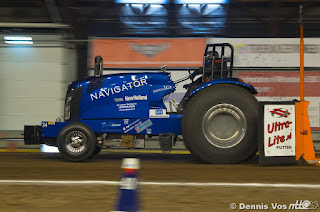 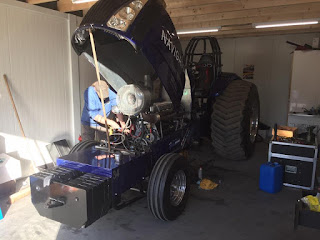 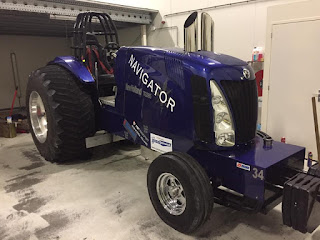 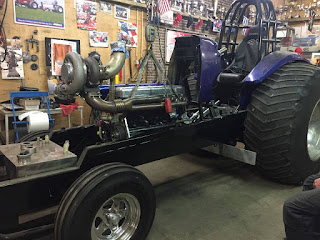