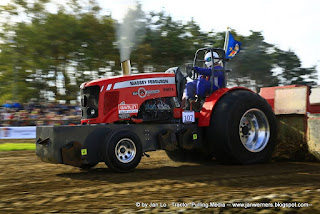 From Visbyslätt, in Sweden, the ASA Pulling Team around Erik Franzen and Fillip Nillson have built a new 4.5t / 9260lbs. Massey Ferguson Farm Stock Tractor. After 2 years of building, the machine made its maiden run at the 2018 Lidköping City Pull in Sweden. The ASA Pulling Team is not an old Team in the Swedish Tractor Pulling Sport. The Team was founded by Erik, Fillip and the mechanic Olle in 2015. But, Erik Franzen started with Pulling much earlier. In 2011, he purchased a old Volvo BM600 from 1997. He named it ,,Oden´´ after the nordic mythology, a god that was considered the oldest, biggest and wisest. It had a TD70 engine, he drove it for 3 years and sold it in 2016.
In the fall of 2015 he, Fillip and Ole started to built a new tractor, a Volvo BM800 for the 3.6t / 7930lbs. Farm Stock class. They called the Tractor ,,Fenrisulven´´, also after the nordic mythology.  They were ready with the Volvo for a local Swedish Championship round in Lövsta at the last minute. It wasn´t just they who made it possible to run, some of the friends helped them the last days. It was long nights and many hours in the workshop.The first pull went well, without any testing before. After one season in the 3.6t / 7930lbs. Farm Stock division with the Volvo BM800 there came the plans to built a new Tractor. In January 2017, the Swedish Team purchased the old Massey Ferguson V8 Pro Stock Tractor called ,,Red Attraction´´ without the engine and the rear wheels from the Netherlands. 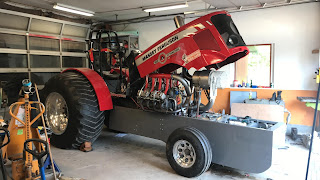 Their first plans were to building a new V8 Perkins engine for the Massey and then compete in the Pro Stock class in Sweden. But those thoughts were shattered because of weight problems. After more thoughts they decided to convert the old Red Attraction Pro Stock into a 4.5t / 7930lbs. Farm Stock. The Team built a new homemade steel wedge frame with new engine brackets for the MF. The frame were made out of 3mm sheet metal. The rest like the rearend, the rollcage, the hydraulic power steering, the sheet metal fenders and the Massey Ferguson hood were took over.
The hood of the Farm Stock is a Massey Ferguson 7499 from the 2010 version. The rear axle is a machined MF 1155 axle with a MF 1155 diff and has a original 1155 ring and pinion gear. Also the rest of the parts in the rear axle like the planetaries carrier housing, planetaries and the shafts come from a MF 1155. The original MF 1155 transmission case is machined and received some better Fuller transmission gears. The clutch bell housing is also machined. The MF bell housing was spindled out and a steel liner was fitted in. With this change, the Tractor can run without the shatter blankets around the bell housing. The clutch of the vehicle is a 10´´inch centrifugal clutch with a steel fly wheel and 4 discs. The clutch was manufactured by the company called ,,Hallagårdsmek´´ from Sweden. To find the optimum grip on the Swedish Pulling tracks, they bought a set of used Midwest aluminium rims with cut Firestone All Traction puller tires. 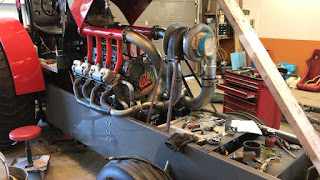 The new Farm Stock called ,,Narfe´´ is powered by a V8 Perkins 510 with 8.3l displacement on diesel fuel.
The V8 diesel power plant has a stock Perkins engine block with Darton sleeves, a Perkins 510 crankshaft with modified stock rods and pistons, revised Perkins 510 cylinder heads with bigger valves and regrinded Perkins camshafts, better and harder valve springs, a homemade intake and exhaust manifold, a modified Schwitzer S500SX turbocharger, a self built water colled Intercooler, a homemade stainless steel fuel tank, a Bosch P3000 diesel fuel injection pump with 13mm elements, a Perkins oil pump and a own designed data logger with a 36 channel in 8PC sensor.
The first season for the Team with the new Massey Ferguson was very succsesful, they won the Swedish Championship in the 4.5t / 9260lbs. Farm Stock division.
For the upcoming winter they have planned to make a lots of small changes on the V8 Perkins powered Massey Ferguson Tractor to be sure to get on the podium next season.
The ASA Pulling Team also have planned to compete outside of Sweden on European Pulling tracks with their toy in 2019. 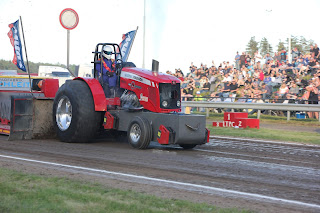 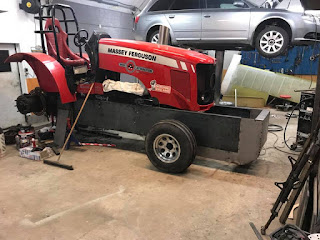 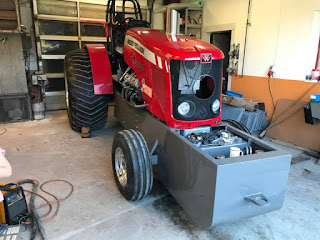