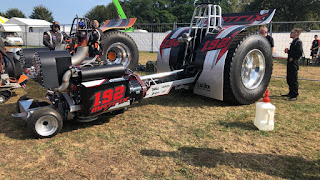 After almost 3 years of planning and building, the new twin 6 cylinder Cummins powered 5500lbs / 2.5t Light Modified tractor called ''The Matrix'' of the Matrix Pulling Team around Brian, Wesley and Corne Luijkx from Hoeven in the Netherlands is finally ready now.
The Matrix Pulling Team was founded in 2008 and started in the garden pulling division. They bought a tractor for the light compact diesel class and the machine was called ''Little Passion 4 diesel''. The light compact diesel was nicknamed after the Case IH MX285 pro stock tractor called ''Passion 4 diesel'' from Made, in the Netherlands. Two years later they started building their very first self-build tractor with a homemade chassis. This tractor also was a light compact diesel and was called ''Gladiator''. Both tractors the ''Passion 4 Diesel'' and the ''Gladiator'' were powered by a 4 cylinder Citroen engine with a displacement of 1.9l on diesel fuel. 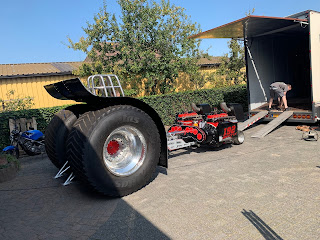 After 4 years light compact diesel pulling, driver Brian Luijkx was 16 and old enough to enter the compact diesel class. 2013 was the first year where they competed with the very first Matrix in the Dutch Championship of the 600kg compact diesel division. The compact diesel had a homemade wedge frame with a homemade roll cage and a replica of an IH 1066 hood. The machine was powered by a turbocharged 4 cylinder VW engine with 1,9l capacity on diesel fuel. The tractor also was sometimes known for some spectacular passes and wild rides, like in Bakel, the Netherlands in 2013. In the same year, they finished at the European Championship in Bookholzberg, Germany on a well 3rd place. The Team drove 4 seasons with the compact diesel before they decided to step into the light modified class, this was officially announced at the 2016 Made’s Powerweekend. 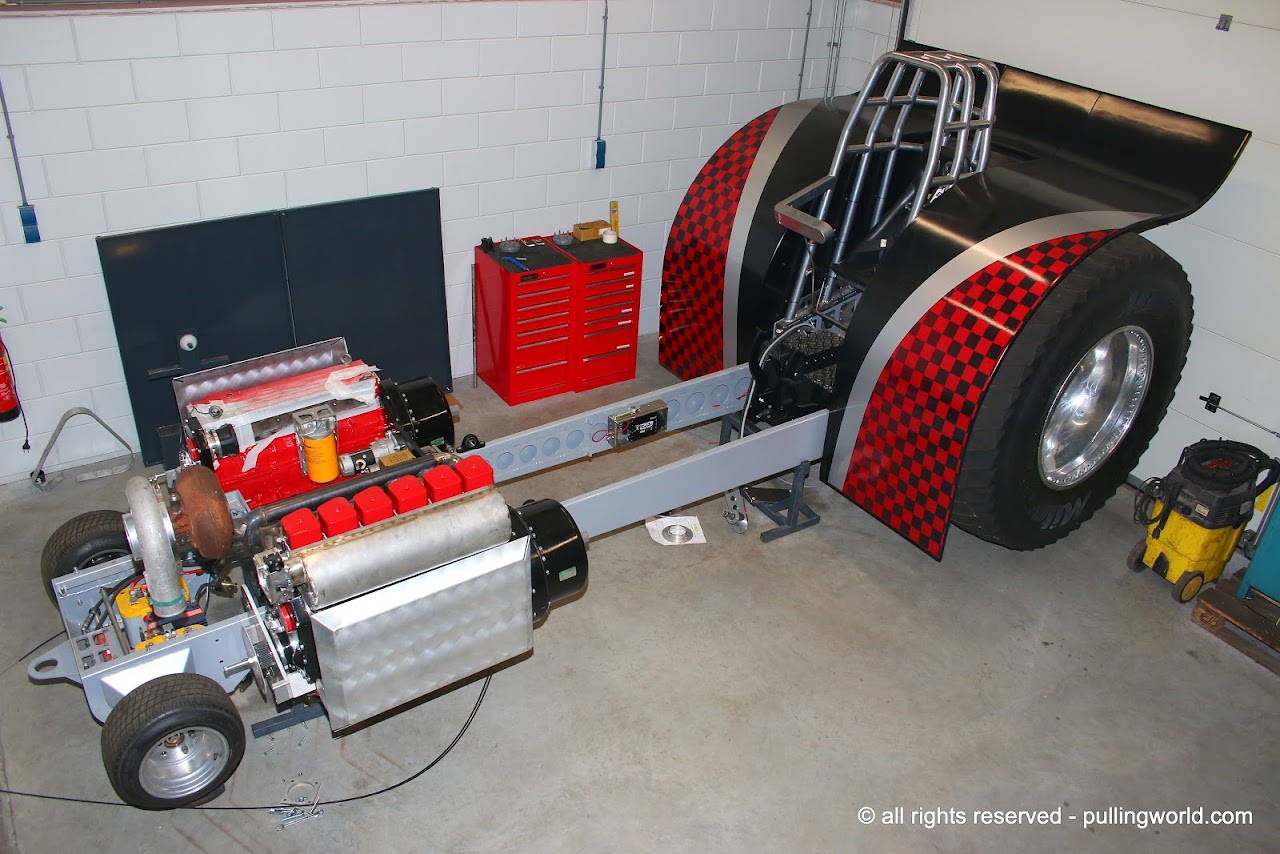 But why have the Team decided to build a completely new tractor with 2 Cummins engines for the light mod class?
The dutch team felt it was time for a new challenge and some team members really liked the new limited super stock class and the others liked the light modified class. By building a light modified tractor with limited super stock style engines they had the best of both worlds.
The new Matrix light modified tractor got a homemade Domex 700 wedge frame with a homemade 3 bar chrome-moly roll cage, a racing driver seat with a 4 point harness, a self-developed hydraulic steering, homemade stainless steel wheelie bars, a homemade sheet metal rear end with a homemade drawbar and a Van der Waal Pulling Parts steel tow hook.
The Domex wedge frame is a little bit different constructed compared to the other Domex frames in the other pulling tractors in Europe. They welded a Domex steel plate into the C profile of the frame rails and the holes into the plates were laser cut to save weight. They hope to have better stability in the frame and hope to have a better balance with those changes.
The frame rails were laser cut and bend by the Dutch company called ''Tosec B.V. from Zwolle. The new roll cage was powder-coated with chrome-moly by Cobla Coating Systems B.V. from Oudenbosch, in the Netherlands. 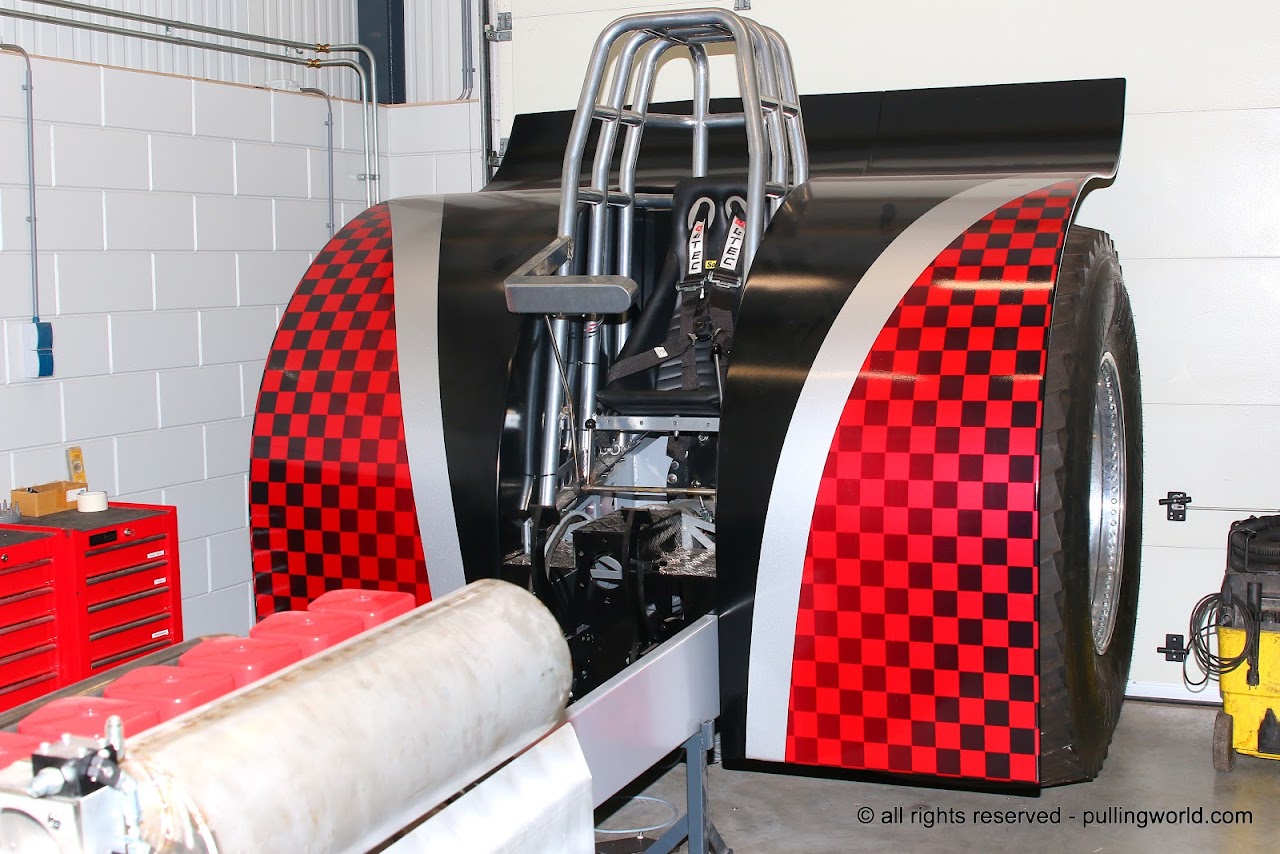 The new fenders on the tractor are made from carbon fiber and were built by the Rocket Science Pulling Team from Weert in the Netherlands. The new side shields on the power plants were made of stainless steel by the team himself. The new vinyl graphics on the fenders and the side shields on the engines were done by team member Wesley Luijkx from Hoeven.
The sheet metal rear end in the light mod received a Rockwell center section with a modified Rockwell differential, a Rockwell ring and pinion gear, custom-built shafts, machined aluminum planetaries carrier housing with Mercedes planetaries and Van der Waal Pulling Parts aluminum brake calipers with laser-cut brake rotors.
For a good traction on the Dutch and European Pulling tracks, the guys of the Matrix Pulling Team purchased a set of almost new cut Mitas 30.5x32 Powerpull tires with new polished Midwest aluminum rims. The tires were bought from the Eager Beaver Pulling Team in Putten, the Netherlands and farm stock competitor Hans Heesakers from the Netherlands will recut the new Mitas tires after some pulls for the Team. 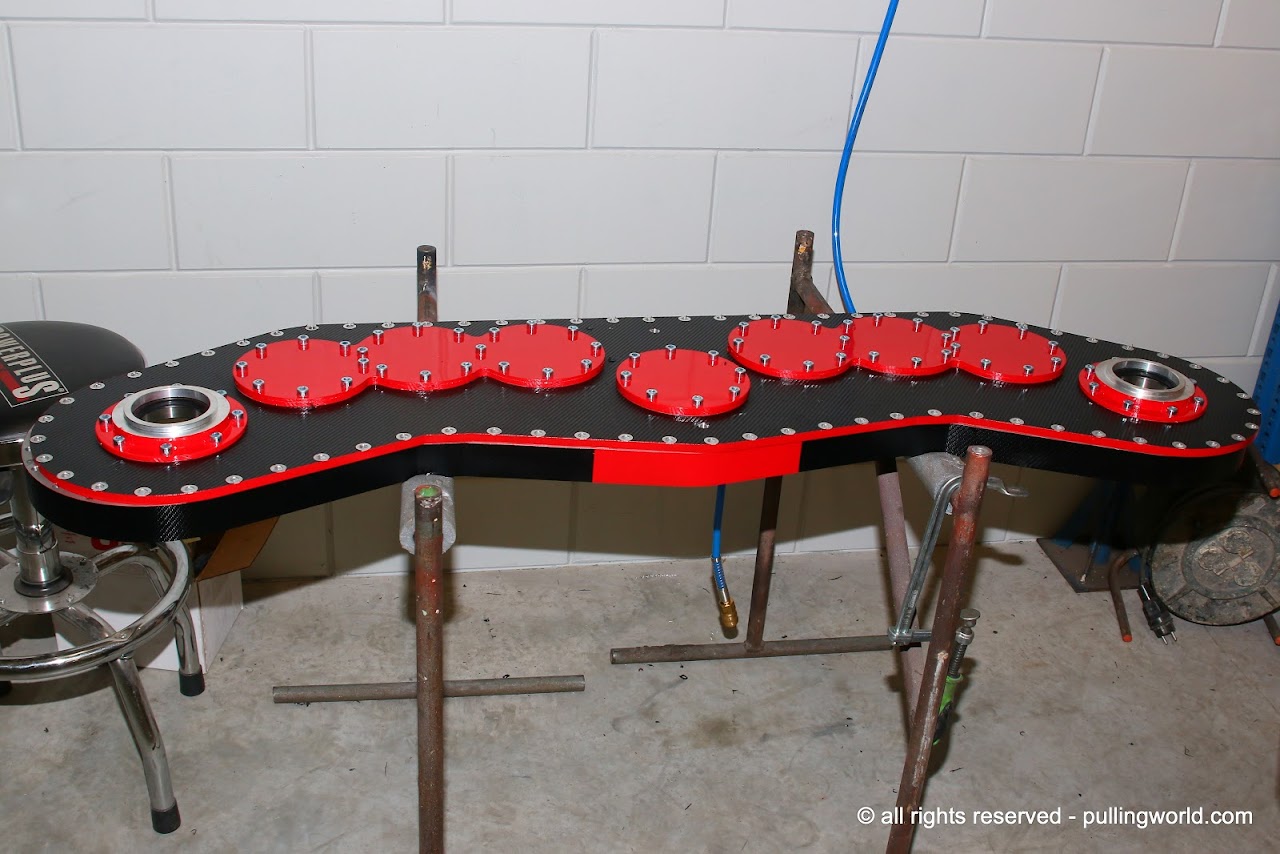 Also completely new developed and built is the drivetrain of the machine. The drivetrain has an SCS reverser with a custom-built driveshaft between the crossbox and the reverser and a newly built homemade crossbox with special made gears. The newly built crossbox has a CNC-machined aluminum housing with 9 custom built gears.
Jurrien van de Geer and Geert de Heus of JGGH Engine & Transmission Solutions from Overberg in the Netherlands did the calculations for the new crossbox and also have manufactured all the custom-built gears for it. The rest of the calculations for the drivetrain did the Team himself. The new driveshaft from the reverser to the crossbox was CNC-machined by Van der Waal Pulling Parts from Etten Leur in the Netherlands.
Each of the 2 Cummins engines on the tractor got an 11 inch Crower centrifugal clutch with 4 discs and a custom made Van der Waal Pulling Parts flywheel. The clutches are protected by an 11-inch Browell aluminum bell housing. They purchased the bell housings from the Screamin' Bobcat Pulling Team in Ijsselmuiden in the Netherlands. The bell housings come from the old light modified and modified tractor called ''Double Screamin'''. 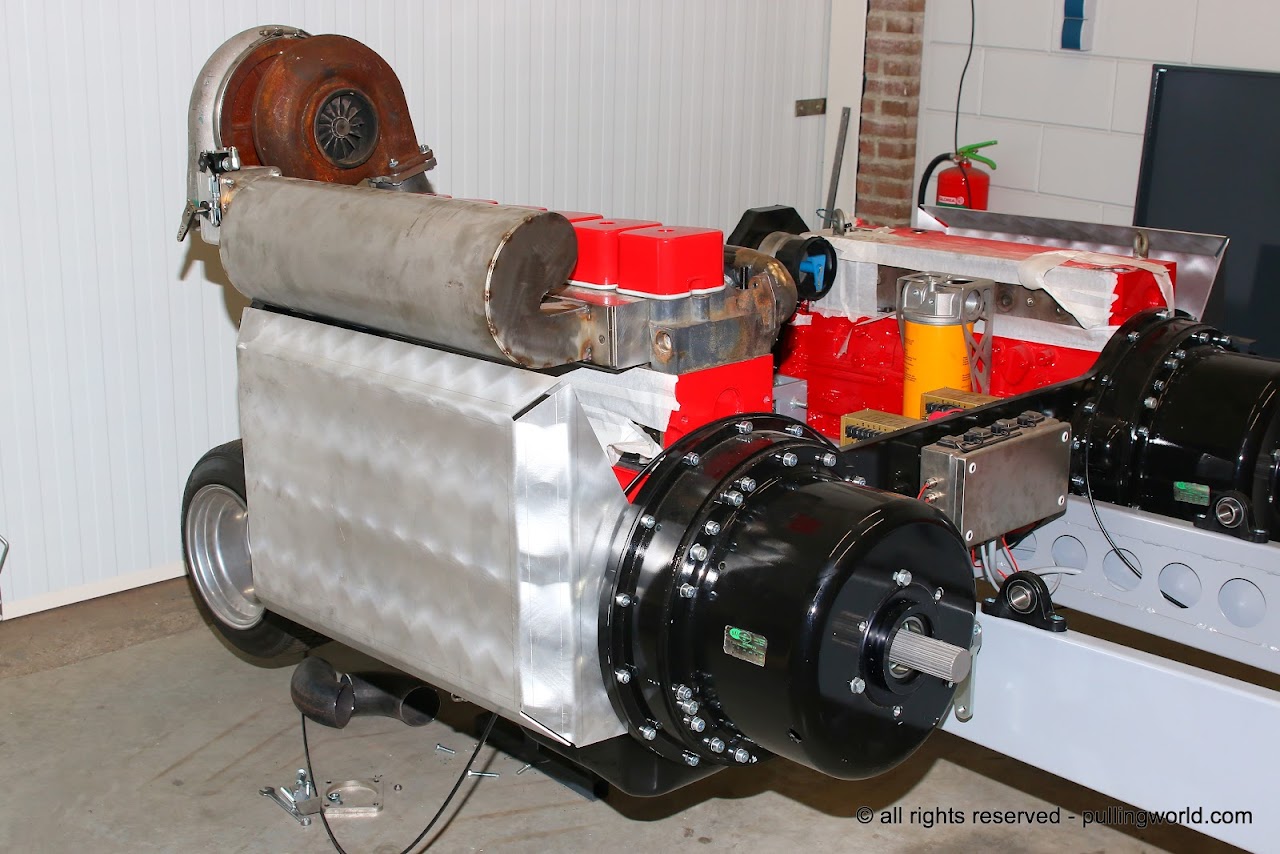 The new Matrix is powered by 2 turbocharged 6 cylinder Cummins ISB 5.9 engines with a 5.9l displacement on methanol fuel. The 6 cylinder Cummins power plants on the Matrix come from a Dodge Ram pickup truck. The Cummins B Series engines were produced since 1984 and are intended for multiple applications on and off-highway, light-duty, and medium-duty. The stock version of the 5.9l American engine has a gear-driven camshaft drive, a forged steel crankshaft, a Holset Engineering turbo, a common rail high-pressure injection system and an electric fuel control system. On the dyno, the ISB Cummins engine version on diesel fuel makes around 325hp at 2900rpm and a torque of 827Nm at
1600rpm. His older brother the 6BT is a bit weaker compared to the newer version. On the dyno, the 6BT version has 215hp at 2500rpm and a torque of 597Nm at 1600rpm.
The engines weren't used only in the Dodge Ram pickup trucks, the powerplants were also used in buses, marine boats, power generators, small trucks, agricultural machinery, and construction machines. 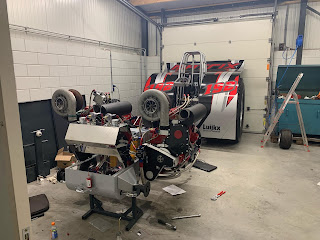 The 5.9l ISB version of the Cummins was built between 1998 and 2007 and the 6BT version between 1989 and 1998.
The engines are not very unknown in the tractor pulling sport. The competitors in the 4x4 Super Stock Diesel Truck class in the USA using the same engine in their pickup trucks, but with some differences compared to their engines. They run on diesel fuel with 3 big turbochargers and 6.7l displacement at around 3000hp.
Back to the alcohol fired Cummins version. The Cummins power plants on the Matrix have a Cummins ISB 5.9 stock cast iron engine block without sleeves, a revised and new counterweighted stock steel crank with new billet aluminum CP Carillo rods and new homemade aluminum pistons, revised stock Cummins heads with new original valves and specially made valve springs, original aluminum valve covers, a new billet steel camshaft from Canada, a homemade stainless steel intake and exhaust manifold, a billet Holset HX82 turbocharger with a 3.9inch intake wheel from HMT power parts and a homemade aluminum air intake funnel, a homemade stainless steel turbocharger protection, a homemade stainless steel fuel tank, a Van der Waal Pulling Parts fuel system with a Van der Waal Pulling Parts fuel pump, a homemade oil tank, a dry-sump lubrication with a Aviaid three-section oil pump, a MSD-8 Plus ignition and a Racepak data logger system from Post & Dros in Dronten, the Netherlands. For the installation of the Racepak data logger setup on both engines they got help from Hans Biemans of the Rocky Pulling Team. 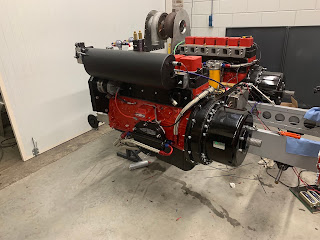 For the conversion from diesel to methanol, they had to make some changes on the engines, like on the cylinder heads. The diesel injectors in the heads were removed and replaced by spark plugs. The turbos on the power plants and the fuel tank sitting on the front end of the tractor to have a better weight distribution and balance on the light mod tractor. Both engines are built on the limited super stock setup, but with less displacement compared to the real limited super stock engines.
Their main goal for the first season with the new twin-engine powered light mod is to learn the 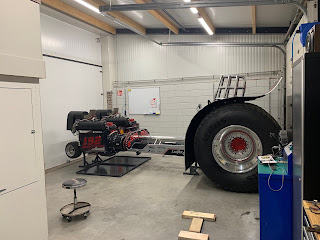 tractor and how it behaves on the different types of tracks, with those points they can build a foundation for years after and they also hope they can get as much horsepower as possible out of these engines.
The new Matrix made its maiden voyage at the Dutch Championship finals in Alphen, the Netherlands. It was 2 tough weeks for the Team from Hoeven to get the new ride ready for the final pull of the season. They also received support from Rob van der Waal for the engines to find the right settings for the first firing up.
But it wasn't a successful premiere for the new machine. Unfortunately, they had problems with the fuel system of the engines. The turbochargers didn't make enough pressure to activate the last fuel stage of the fuel system.
With some changes its possible to solve the problem. Another problem in Alphen was the weight of the light mod. The tractor was 180kg too heavy for the class, so the machine ran out of the official competition on that day.
For the upcoming winter, the Team has planned to make some changes on the new Matrix, especially they want to make new parts to get the tractor 200kg lighter for the upcoming season.
For the 2020 season, the Matrix Pulling Team will compete with their new Matrix light modified machine in the Dutch Grand National Championship and on some invitation pulls outside of the Netherlands. If the tractor is running well, they also have planned to compete in the ETPC Euro Cup in the future.

more workshop pics from my workshop visit in the middle of June 2019, check here: https://photos.app.goo.gl/dk3gbEakruZt3xUc7 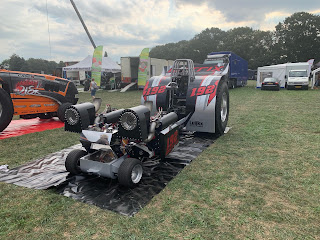 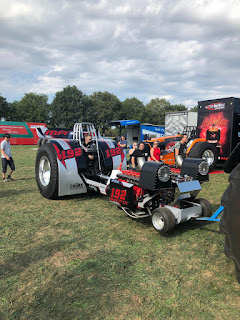 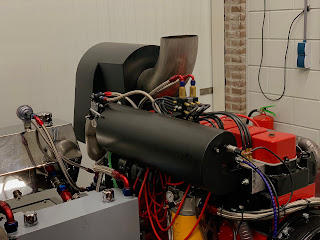 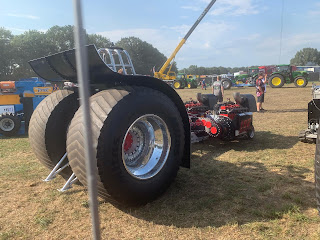 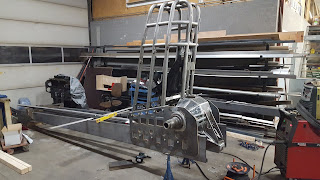 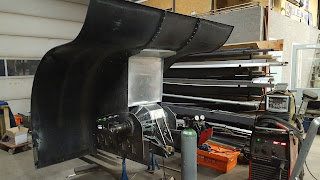 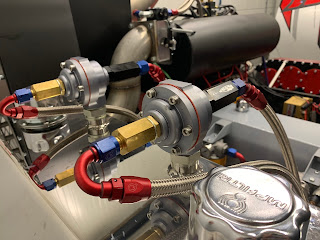 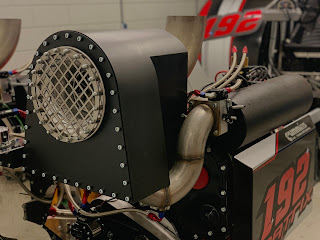 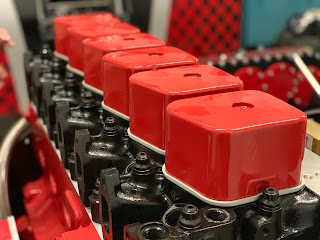 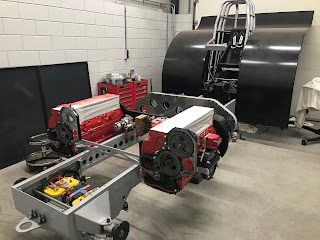