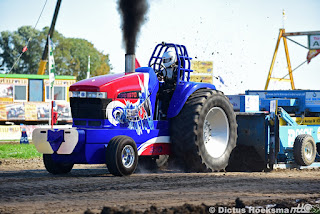 The Junior Simpson Pulling Team from Speuld in the Netherlands have built a completely new Ford 3.6t / 7930lbs component super sport machine during the last 2 years.
The Junior Simpson Pulling Team was founded in 2004 and in the winter of 2004 / 2005 the Dutch team had started to build a Ford 5000 tractor for the 2.5t sport class. Thankfully for this project team member, Kees Hoegen could take over the old Ford 5000 standard tractor of his granddad at this time. After the tractor arrived in the workshop, the Ford was rebuilt into a 2.5t sport class tractor and received the name ''Neighbours Nightmare''. Shortly after the building of the tractor another person came into the team, his name is Evert Mouw and after that, the team grew fast to a bigger team with 7 people. The team ran with the tractor in the top league of the Dutch Championship until 2017. 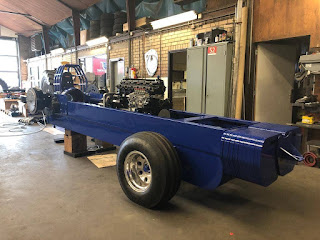 Before they retired with the Ford 5000 tractor from the 2.5t / 5500lbs class, there came the plans to switch into a other class in 2016. In January 2017, the guys started with the parts sourcing for the new component project. After all the parts were sourced, Gertjan Kees and Evert Mouw started with the building of the new Ford tractor for the 3.6t super sport class. During the same time, the rest of the team started to rebuild a new transport vehicle for the new tractor. They rebuilt an old Scania truck into a mobile home with a living room, a kitchen, beds for all crew members and many more different things. In the newly rebuilt trailer is enough space for the Ford tractor and all the tools. The rebuilt of the whole vehicle took over 2 years and many 1000 of hours of work. The whole design on the new transport combination was done by Marco Mathijssen of M2iD from Roosendaal in the Netherlands and the company called ''Van Winkoop'' from Ermelo in the Netherlands did all the paint job and foil work. 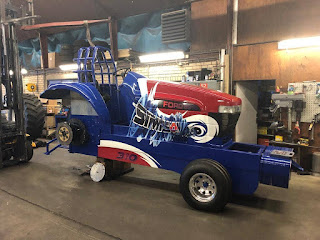 But back to the new tractor. Most of the parts for the new project were developed and drew on Autocad, which made the later building process easier for the team, especially in the building of parts. The component tractor received a new homemade 3mm Domex 700 wedge frame with a new homemade 3 bar chrome-moly roll cage, a Kirkey Racing driver seat with 4 point harness, a hydraulic steering from a boat with a hydraulic steering cylinder, new homemade chrome-moly wheelie bars and a Rockwell rear end with a newly constructed drawbar.
The Domex frame rails and holders were laser cut and bent by Axxent Metaal B.V. in Vaasen in the Netherlands. Axxent Metaal B.V. also has laser cut all the new moveable steel weights for the new machine.
The new component chassis is much lighter compared to an old-style super sport tractor with the old stock rear end and stock gearbox. Another advantage with a component machine is, you have many more possibilities for moveable weight, which makes it easier to find the right balance on tracks with lots of traction. 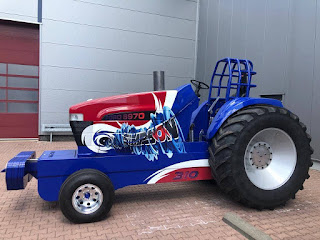 The hood on the component machine is a Ford 8970 hood from the old Ford 70 Series. The new rear fenders on the Ford tractor are very light built. The Junior Simpson Team purchased the fenders from the Rough and Tumble Pulling Team (have a New Holland TG285 Pro Stock) from Heino in the Netherlands.
The first generation of the Ford 70 Series was built from 1993-2000 and the 2nd generation between 2000 and 2004. The 8970s were also sold as Landini Starland 270 in Italy between 2004 and 2005, which was the latest and last version that was built. The 70 series was manufactured in 2 different versions. Once for Europe with high lifting power and four-wheel drive and for North America as a tractor with twin rear wheels. The stock tractor is powered by a water-cooled turbocharged Ford 456 Genesis engine with 456cui / 7.5l on diesel fuel. The 6 cylinder power plants also have a cross-flow cylinder head with spiral intake ports and a Bosch diesel fuel injection pump. 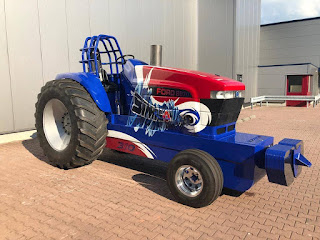 The completely new vinyl graphics on the tractor were done by Marco Mathijssen of M2iD (pullingart) from Roosendaal in the Netherlands and the guys of the company ''Van Winkoop'' have placed vinyl graphics on the tractor. Van Winkoop also has done the whole paint job work on all the parts of the new ride. The SQHD Rockwell housing of the rear axle was machined and got an original Rockwell center section with a stock needle bearing Rockwell diff, a Rockwell ring, and pinion gear, new machined half shafts, Franklin planetaries carrier housing with Franklin planetaries and Engler Machine & Tool aluminum brake calipers with laser-cut steel brake discs. 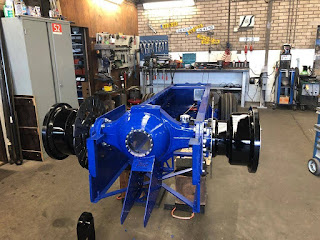 Also completely new built is the drivetrain of the Ford tractor. The drivetrain received a new Profab 3 Speed HD transmission from the USA with a homemade steel driveshaft from the transmission to the clutch, a 12.5 inch centrifugal clutch with 4 discs and a billet steel flywheel by Laurens den Boer of the Simply Green Pulling Team from Molenaarsgraaf in the Netherlands. The new clutch from the Simply Green Team is protected by a homemade steel clutch bell housing.
For the optimum grip on the dutch pulling tracks, the team purchased a set of new cut Michelin 650/65/R38 tires on newly built steel rims. The new Michelin tires were cut by 3.6t Super Sport competitor Hans Heesakers in the Netherlands. 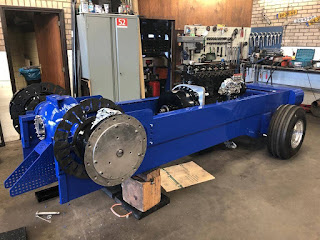 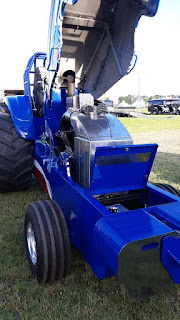 Back to the pulling engine.

For the pulling sport, the TW engine received a lot of changes, especially to increase the horsepower and the torque. The engine for the component tractor comes from a Ford TW-20. So, the power plant of the machine got a stock engine block without sleeves, a stock Ford 401 BDT crankshaft with stock rods and stock pistons, a revised Ford stock cylinder head with stock revised valves by KMB (Koebrugge Metaal Bewerking B.V.), a grinded camshaft, a homemade intake and exhaust manifold, a aluminum Intercooler from the Rednex Pulling Team from Vroomshoop in the Netherlands, a billet Holset HX82 turbocharger by Santen Technics from Vroomshoop in the Netherlands, a homemade aluminum oil pan with a Aviaid 4 Stage oil pump from VSP (Veldhuizen Special Products), a homemade fuel tank and a Bosch P diesel fuel injection pump with 16mm elements by Dutch Pump Performance (DPP) from Vroomshoop in the Netherlands. For 2020 they have planned to put a data logger on the engine, the displacement on the 401 BDT engine should be increased to 7l and many more updates are planned on the power plant.
The first season of the new tractor was a bit bumpy. Especially the newly built engine worked not perfect at the first events and with the new component setup it was a completely new world for the whole Dutch Team from Speuld. So the first season was a learning year for them to find the right settings for the engine and the perfect setup for the whole Ford component tractor.
The Junior Simpson Pulling has planned to compete with their new Simpson component super sport machine in the Dutch Championship again and maybe in the ETPC Euro Challenge for farm stock tractors. 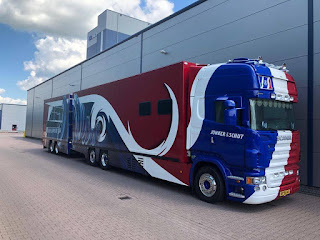 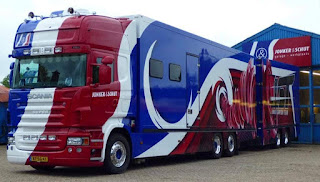 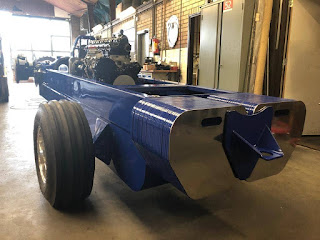 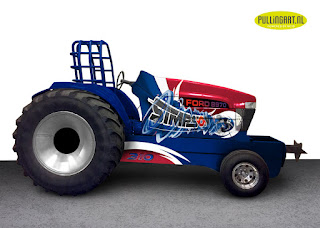 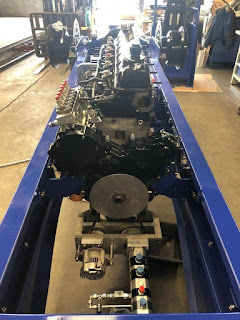 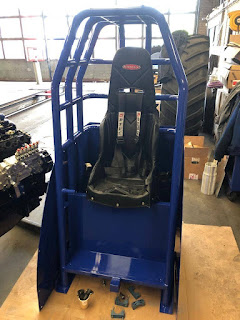 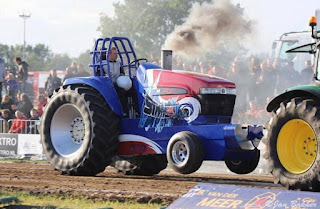 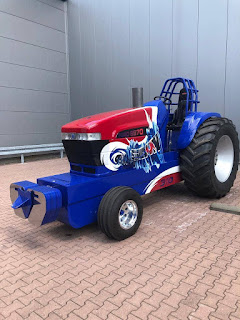