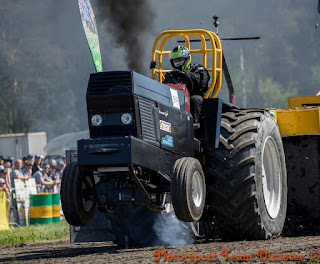 The Honey Bear Pulling Team from Alahärmä in Finland have built a new 3.6t / 7930lbs Ursus farm stock tractor during the last 2 years. By most people, the team isn't currently very known in the European pulling sport, but with a story about the team and the new tractor, we will change that now.
The Honey Bear Team is a father and son Team from Alahärmä in the middle of Finland. By most of the tractor pulling competitors and fans, the village Alahärmä isn't an unknown territory in Europe. Alahärmä hosted the ETPC European Championships in the past twice in 2003 and 2011.
Tommi Kumpula's father was a mechanic in the super stock tractor pulling team called ''MP-Lift'' for 15 years. After the MP-Lift Pulling Team stopped with tractor pulling, he was a mechanic for the 4.5t / 9920lbs super sport pulling team ''Hot Hunter''. The MP-Lift Pulling Team competed in the super stock class from 1991 to 2004 on the Finnish pulling tracks and in the ETPC Euro Cup. Team owner Mikko Perra started in 1990 in the 2.5t / 5500lbs standard class with a Valmet 706 tractor. A year later, Mikko and his team stepped into the super stock class with a completely new built Valmet 511 on diesel fuel. 1992 was a very successful year for them, they won their first European Championship title in the 4.4t super stock class in Bernay, France. For the beginning of the '93 season, the Valmet tractor received a 3 charger setup, later during the year they switched to a 4 turbocharger setup on the Sisu engine and finished in the first year of the Euro Cup in runner up position in the points. In the years of '94 and '95, they also have built the white Valmet super stock tractor called ''Mega Power''. At the end of the 1995 season, the team decided to stop with pulling and sell their both tractors. MP-Lift went to Brazil and Mega Power went to Christer Örn (owner of Eagle Clutches) in Finland. 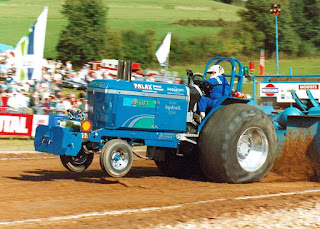 But in 1998 the Finnish team returned to the pulling scene with a completely new super stock tractor. This time it wasn't a Valmet on diesel fuel, it was a blue John Deere 4450 on alcohol fuel. The new tractor was built during the winter of 97 / 98 and Willem Veldhuizen, the owner of Veldhuizen Special Products from the Netherlands had built the inline 6 cylinder John Deere alcohol engine with 3 turbos for that new machine. The Team was pretty successful with this blue John Deere, 2 times runner up at the European Championships in 1999 and 2001, runner up in the Euro Cup in 2000 and third in 2001. But the biggest success was the victory on the 2003 European Championship in Alahärmä in Finland. They won their second European Championship title, this time in the 3.5t / 7700lbs super stock class. 2004 marked the last and final season for the team with a 6th place at the EC in Füchtorf, Germany and an 8th place at the last and final pull of the tractor at the Euro Cup in Bettborn, Luxembourg. 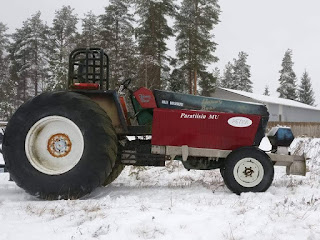 But back to the Honey Bear Team.
Tommi has dreamed of driving a pulling tractor since he was a little boy. But his dream finally came true in 2019. At the beginning of 2017, Tommi bought the old pro stock tractor called ''Honey Bear'' from Aarne Saarnio in Finland.
After that, the father and son started to rebuild the tractor for the 3.6t / 7930lbs super sport class.
But why they have decided to rebuild the tractor into a 3.6t / 7700lbs super sport?
They thought it´s a good class to start and there are also a lot of competitors in Finland too. The tractor has been originally built for the super stock class in the '80s by Timo Piirto. Then he sold the machine to Aarne Saarnio and the tractor was renamed as Honey Bear. Aarne competed in the pro stock class in Finland with the Ursus tractor for many years. The last competition he drove, was in 2002 and after that, the tractor was in a hall for about 14 years. 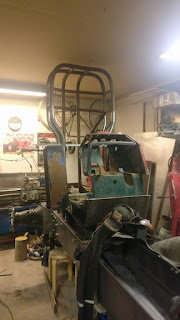 After the tractor has arrived in the workshop of Tommi Kumpula and his dad, they started with the work on the tractor. The former pro stock machine was completely dismantled and received a lots of changes and new parts during those 2 years of building.
The Ursus tractor received a new homemade steel wedge frame with a new homemade steel roll cage, a hydraulic steering, new homemade steel wheelie bars, and a newly built drawbar.
All the parts for the new wedge frame were laser cut and bent by the company called ''MP-Lift'' (Mikko Perra's company) in Ylistaro, Finland. The company MP-Lift usually build front loaders for stock tractors.
The rear end of the tractor comes from Ursus 1201 and the housing is still original, only some internal parts were changed by new or revised components. The rear end received a needle bearing differential with an original ring and pinion gear, original axle funnel with stock planetaries, stock shafts and original brakes. With the revised differential, they hope to have nice straight pulls in the future. Also, the gearbox and the bell housing of the machine is almost still original. The only thing that has been changed in the gearbox is the ratio. The guys have made the ratio with different original gears a little bit faster. Around the bell housing is a shatter blanket now, it protects the driver and the spectators for flying debris if the clutch would explode. In the bell housing working a 11 inch centrifugal clutch with a steel flywheel. The clutch was built by Christer Örn of Eagle Clutches from Kumminek in Finland. 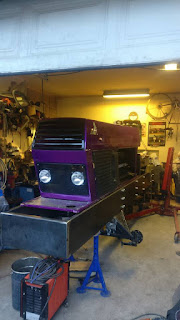 The rear wheels on the tractor are a set of cut Continental 650/65-38 tires on new homemade steel rims. The tires on the steel rims were cut by the team himself in their workshop.
The hood and the fenders of the super sport machine are original and come from an Ursus 1201 tractor. The original sheet metal hood and fenders were taken over from the old Honey Bear pro stock tractor. The Ursus 1201 stock tractor was introduced in 1973 and was available only with 2 wheel drive. The machine was powered by a naturally aspirated 6 cylinder engine with 112hp on diesel fuel. The version with four-wheel drive had the designation 1204. After modernizing the design of the engine to enable cooperation with the turbocharger, the engine power was increased, and the tractor had the designation 1604.
The Honey Bear super sport machine is powered by a turbocharged 6 cylinder Ursus Z 8701 engine with 7l displacement on diesel fuel. The original Z 8701 power plants have a displacement of 6.8l and were built with turbochargers and without turbochargers. The engine without the turbocharger has 120hp and was used in the Ursus 1224 stock tractor. The charged engine was in the Ursus 1224 turbo and has 145hp. The Ursus 1224 was built from 1984-2009 and the 1224 turbo from 1984-2001.

The power plant in the pulling tractor was revised, received more displacement, a bigger turbo and many more things to increase the power.
The pulling engine received a machined stock block with Westwood steel sleeves, a revised head with bigger flow channels, new bigger valves from Diesellandia (Herlevi Pulling Team) with new better COMP Cams valve springs, a homemade intake and exhaust manifold, a billet Holset HX82 turbocharger from Jukka Laitamäki, a stock Ursus crank with stock hardened rods and billet piston from Wikam Pulling Parts from the Netherlands, stronger piston pins from Diesellandia, a billet steel camshaft by Jan Burggraf (New Generation Pulling Team) from the Netherlands, an external oil pump, a new aluminum Intercooler and a Bosch P8600 injection pump with billet injectors by Dikkenberg Dieseltuning from Wekerom in the Netherlands. 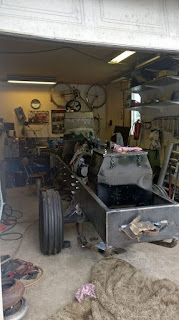 The new aluminum Intercooler is based on a CFS Intercooler from the USA. The new cooler was designed by Ari Puisto from Finland and the company KJH Comp has built the Intercooler for the Team.
The first season for the new super sport tractor was pretty good without any big damages and 2 wins in the Finnish Championship. The Honey Bear Pulling Team finished in runner up position in the Finnish Championship behind the Fendt 930 Vario tractor called ''House Hurricane''.
The team have planned to make some changes to the Ursus tractor for the upcoming year. The tractor will receive a set of new used puller tires, some changes on the engine like a data logger, a newer Ursus 1201 sheet metal hood and a new paint job. The Honey Bear Pulling Team will compete in the Finnish Championship again in 2020.