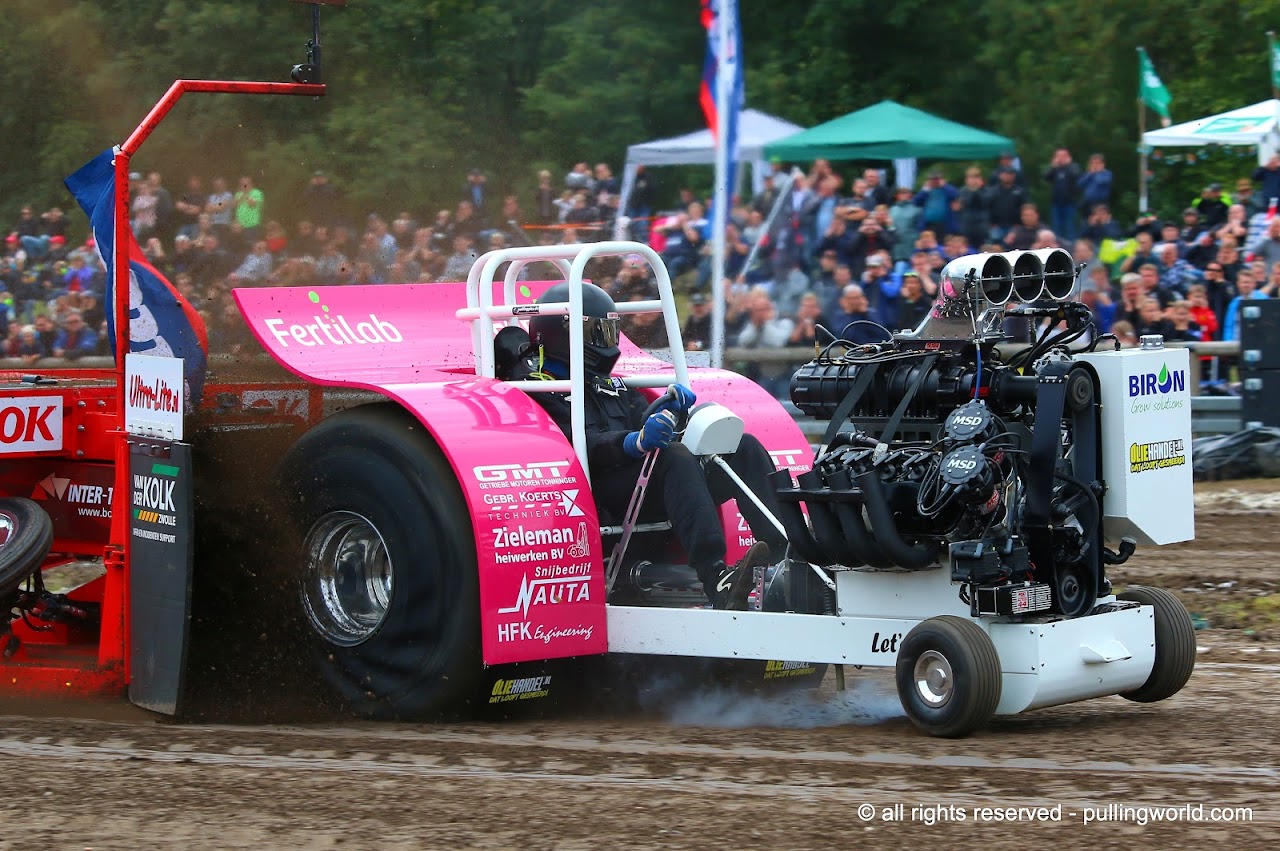 After 3 years with good and bad results, the Let's Try Pulling Team around Marck Jansen, Oskar van der Vinne and Gertie Leusink have built a new Hemi powered 950kg / 2095lbs mini modified tractor during the last winter. The Let's Try Pulling Team was founded in the year of 1999 and starts since that in the 950kg mini mod division. The first Let's Try was built in the winter of 1999 / 2000 and was powered by a naturally aspirated Oldsmobile 400 V8 engine on petrol fuel. A year later in 2001, the Dutch guys made some changes on the tractor, the Oldsmobile engine was replaced by much more powerful blown New Century V8 engine on methanol fuel and the mini received SCS gearbox and reverser and a new better M&O rear end. The machine did well in the competitions and was pretty reliable during that time. In the winter of 2005 / 2006, Marck and Oskar built a completely new Let's Try and also competed in the 2006 Euro Cup for the first time. The first Euro Cup competition for them in Bernay, France was a success, they finished in a very well 3rd place behind the V8 Hemi powered Minis called ''Jackass'' (Egbert Dros old mini mod) and ''Lambada 6''. 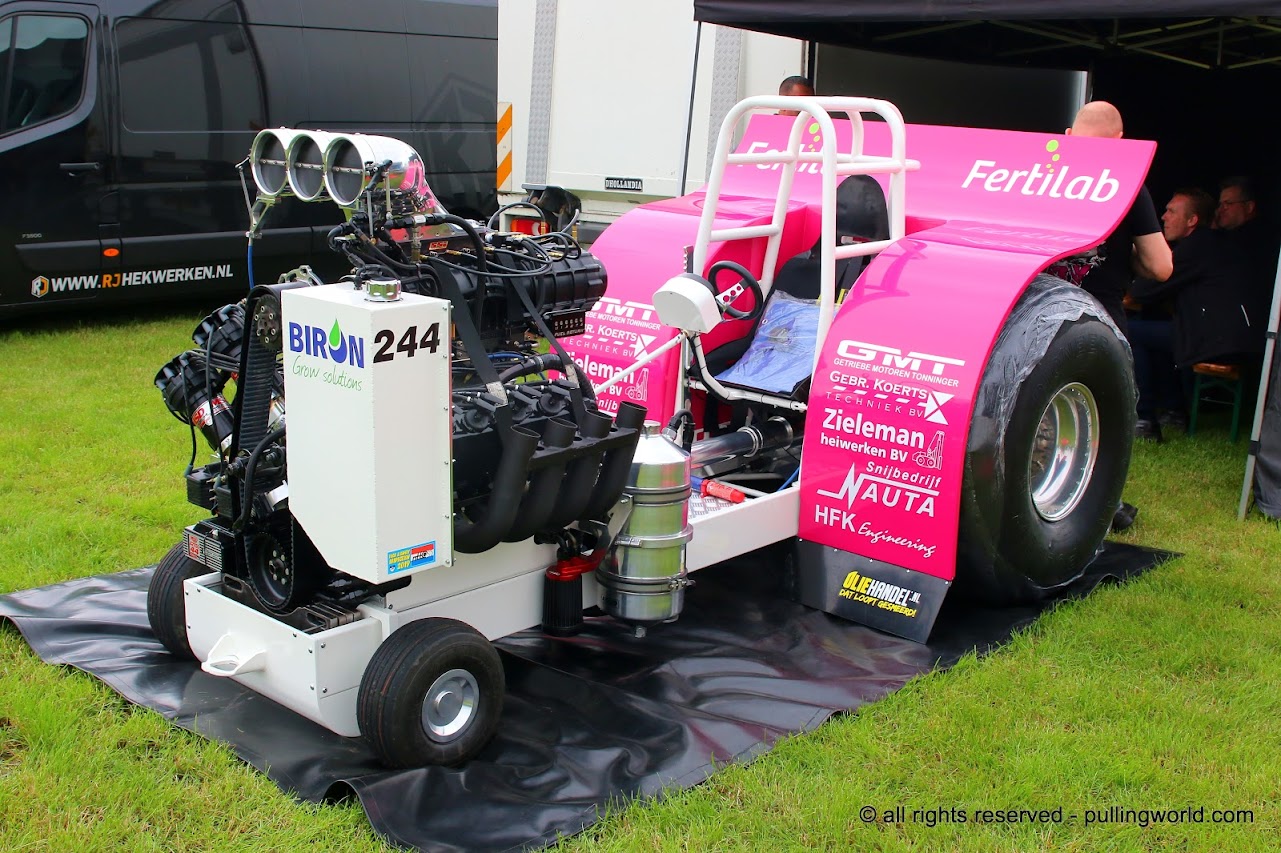 For the 2008 season, the engine received a performance syringe, the old Littlefield blower was replaced by a bigger 14-71 SSI blower with an Enderle aluminum scoop. The new blower gave the New Century more horses and the new scoop a better airflow.
All the changes were rewarded during the year, they won their first Euro Cup round in Bernay, France and finished in runner up position in the point standings of the Euro Cup and in runner up as well at the European Championship in Bryne, Norway. Between 2008 and 2011 the mini mod class developed further and further and further, especially in the engine horsepower and the tires. After the 2011 season, it was clear the current mini with the old tires was not competitive anymore against the high horsepower minis, like the Lambada 7 from the Netherlands and Original Rat Poison from the USA. 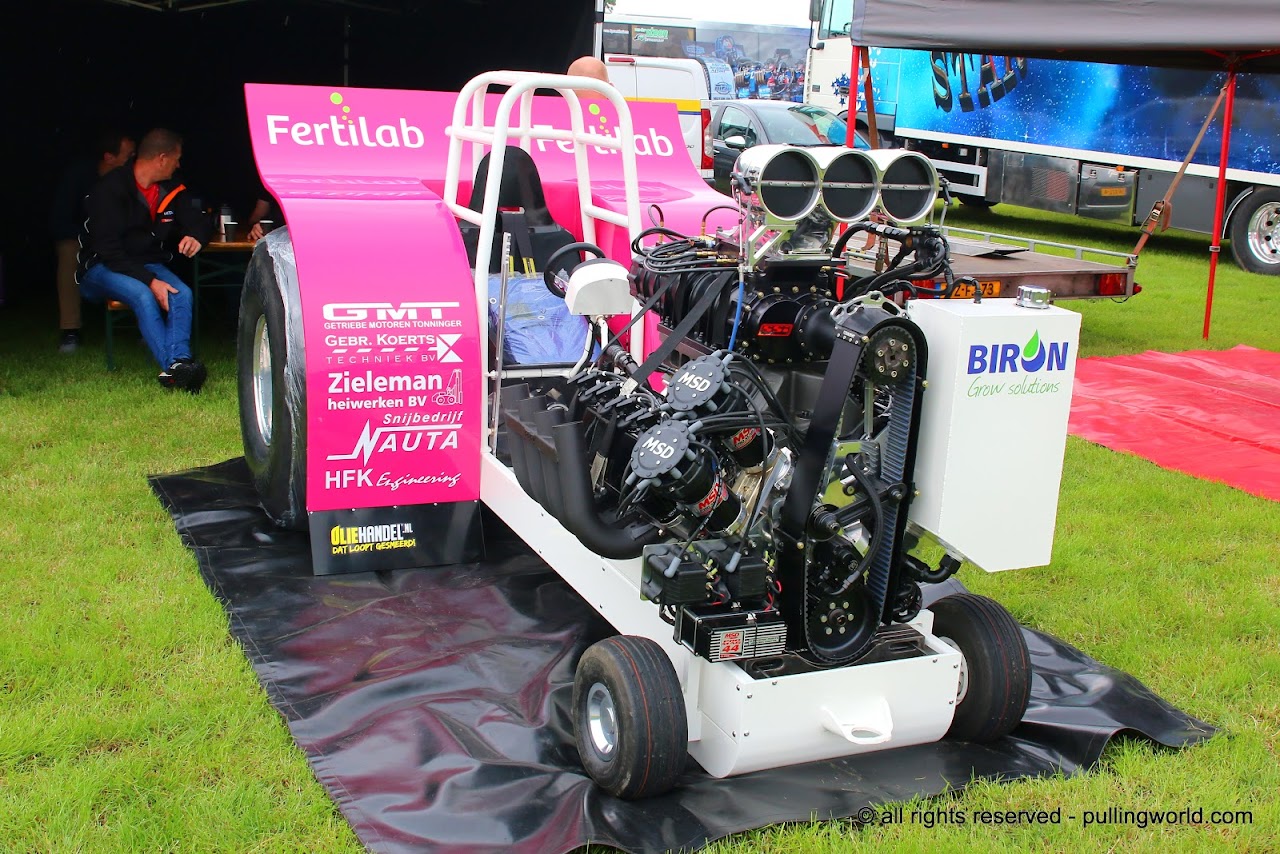 In the winter of 2011, Oskar and Marck sell the old tractor in the Netherlands and started to build a completely new mini mod with a new much more powerful New Century V8 engine. Due to the new Cepek tires, the driver's position was more forward and the center of gravity was lower compared to their old tractor. Also, the color of the tractor changed from yellow black to blue-white and with the Butter Group, they received a new main sponsor on the machine for the 2012 season.
It was one of the most successful seasons for them, Marck and Oskar won the 2012 Euro Cup and finished in the runner up position in the Dutch Championship with the completely new tractor. 2013 was successfully too runner up in the Euro Cup and again 2nd in the Dutch Championship.
The biggest change came in the winter of 2015 / 2016. The team sold the old tractor to Austria at the end of 2015 and the Oskar and Marck started again to build a new mini mod.

Chassis wise the machine looked like his older brother, but one thing was completely different. After 14 years with New Century V8 engines, the team decided to switch to the Hemi fraction. The ride received a BAE V8 Hemi engine with the first Post & Dros machined Hemi heads and an SSI 14-71 blower. The best result of the season was a 3rd place at the Euro Cup round in Brande, Denmark. At the end of 2016, their main sponsor AB Transport Group (the Butter Group was taken over by the AB Transport Group during the time) stepped out as sponsor and with Fertilab B.V. came a new main sponsor on board for the 2017 season. Also, the power was increased for 2017, the SSI 14-71 was replaced by a bigger SSI 18-71 blower. Those two last seasons were tough for the team. Because of the higher horsepower and the weight distribution, the tractor was sometimes very difficult to drive.
After a crash at the 2018 EC in Alphen, the Netherlands, (driver Oskar van der Vinne was hurt and broke a vertebrae in his back) it was clear the mini isn´t driveable with the maximum horsepower of the engine, so it was time to build again a new tractor, which has a better balance with this Hemi engine.
At the beginning of November 2018, they started with the planning and the building of the new tractor and decided to build a completely new different chassis, which was never built before in that style by a other Team in Europe. The most of the mini-mod teams in Europe are currently running with tube chassis (like the Bobcat Jr chassis) very successful, but Marck, Oskar, and Gertie didn't want to do the same as the rest and decided to try something different new compared to the other Dutch and European competitors.

The new Let's Try received a completely new Domex 700 wedge frame with a new homemade constructed chrome-moly roll cage, a new racing driver seat with a 6 point harness, a new rack and pinion steering, new homemade wheelie bars, and a sheet metal rear end with a newly built drawbar.
But what is different on the new chassis now?
The new chassis is built like a chassis on a big modified tractor. The Domex frame rails are bent as a C profile like on a big mod. With those c profile rails, the mini will have a better stability in the frame, which also will make the new tractor better driveable compared to the old Let's Try. Also, the center of gravity of the driver's and engine position is different. The engine position is a little bit more forward and the center of gravity is higher. The driver position is almost the same as on the old tractor, only the position is a little bit higher. The Team hopes to get a better balance with those changes on the new Chassis.

The new fenders on the mini mod were made off carbon fiber. The fenders were built by Team member Gertie Leusink from Dronten in the Netherlands. Gertie also has built a lot of carbon fiber fenders for other Mini Mod tractors in Europe in the past.
The sheet metal rear end basis on a Rockwell  F106 rear end and was taken over of the old tractor. The rear end has a TRB Machine & Tool billet aluminum third member with a Humpco billet aluminum differential, a custom-built ring and pinion gear by Vampire Gears from Neede in the Netherlands, custom-built half shafts and Willwood brake calipers with Willwood steel brake rotors.
The Team has purchased for the new mini a set of new Real Wheel aluminum rims with new Pioneer Giant Puller tires from the USA. 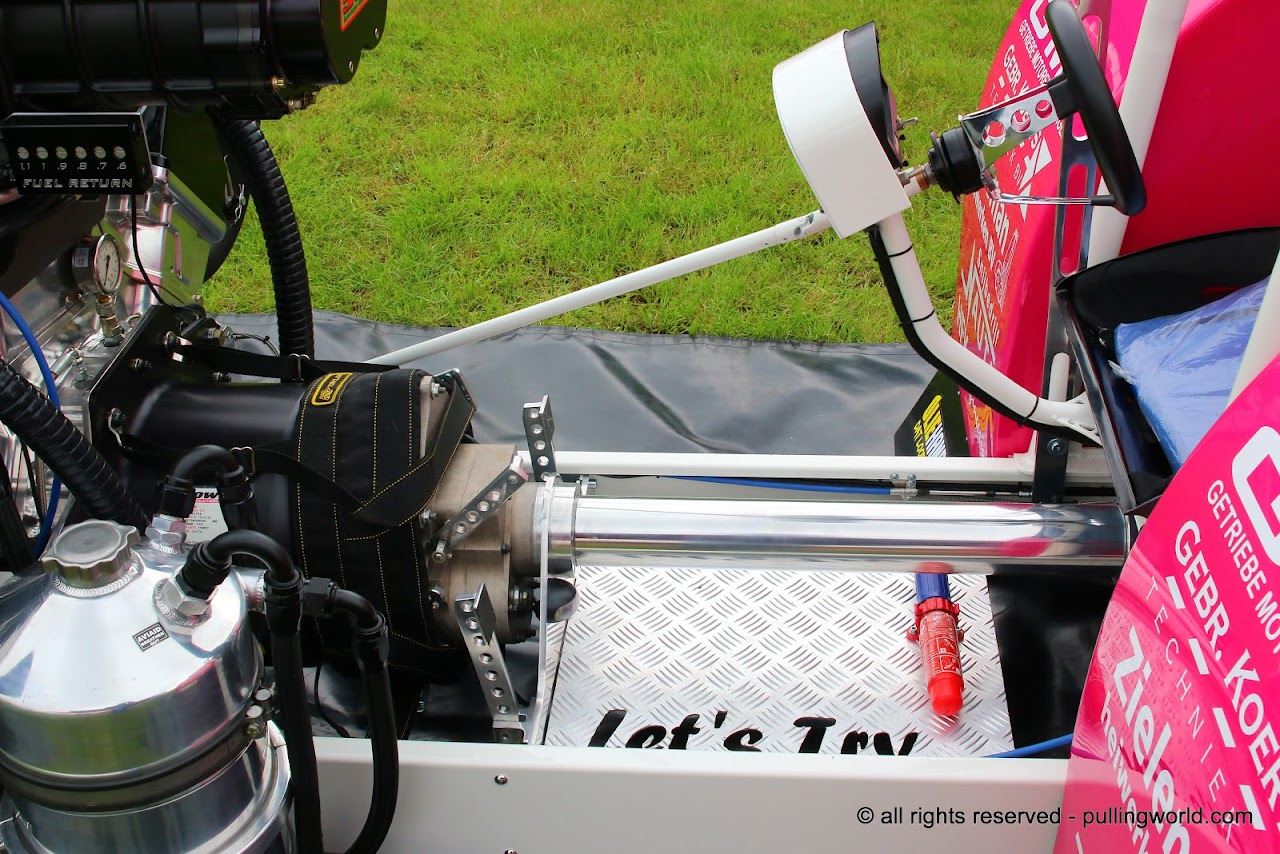 The drivetrain of the machine has an SCS reverser, a new custom-built driveshaft from the reverser to the rear axle, an 8 inch Molinari centrifugal clutch with 3 discs and a Browell aluminum bell housing.
The drivetrain is not completely new, a lot of parts of the old tractor found the way into the new one.
The new Let's Try is powered by a blown BAE V8 Hemi engine with 526cui displacement on methanol fuel.
The engine also comes from the previous tractor and was completely dismantled, checked and received some little improvements and changes during the last winter.

The power plant has a BAE billet aluminum engine block with Darton sleeves, a Bryant crankshaft with MGP billet aluminum rods and CP Carillo pistons, Post & Dros billet aluminum Hemi heads, a SSI 18-71 blower with a Enderle aluminum scoop, homemade steel exhaust headers, a homemade aluminum fuel tank and a Aviaid oil tank, a Enderle fuel pump, a dry-sump lubrication with a Aviaid oil pump, a twin MSD 44 Pro Mag ignition system and a Racepak data logger. With this setting, the engine should make around 2500hp.
The first season with the new mini was a learning year because the chassis was completely new and the weight balance is completely different compared to the old one.
So the engine wasn't set on maximum power and the setting of the drawbar on the tractor was still low. They had no big damages or wild runs during the season and finished in 7th in the Dutch Championship this year. The best result was a 5th place at the EC in Brande, Denmark. All in all, the Team was pretty happy with the new tractor, especially with the balance.
For the 2020 season, the Let's Try Pulling Team has planned to compete in the Dutch Grand National Championship again. 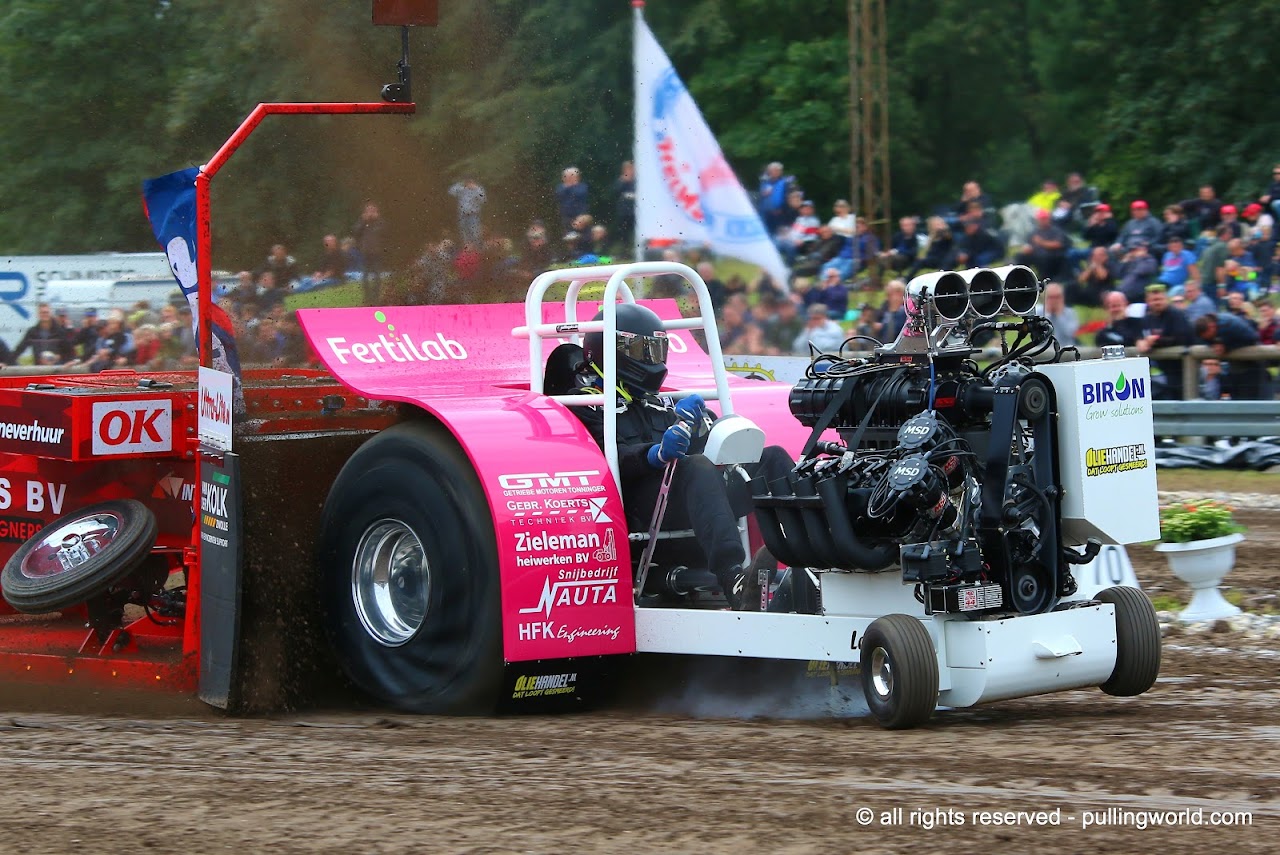 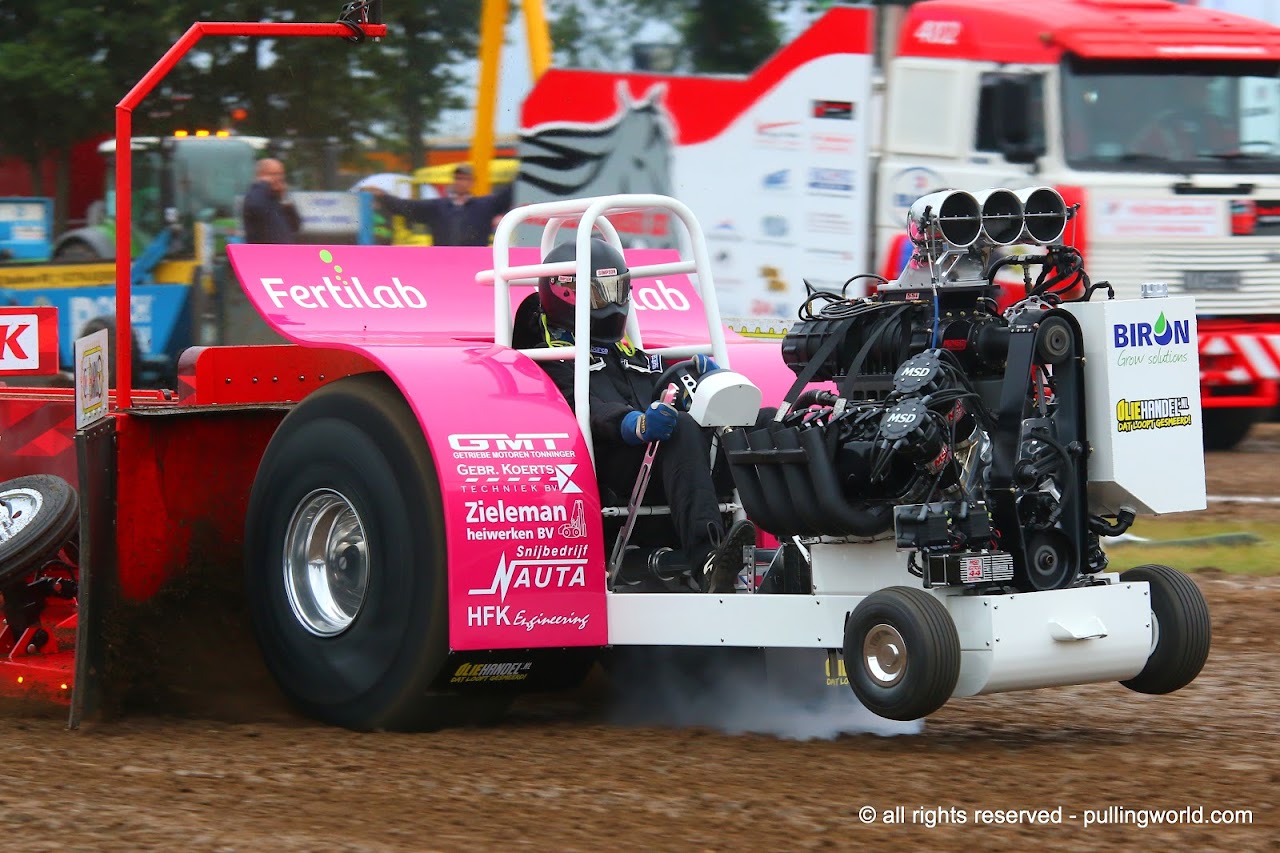 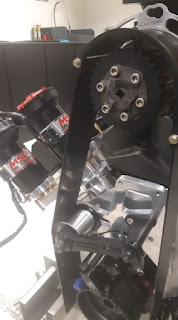 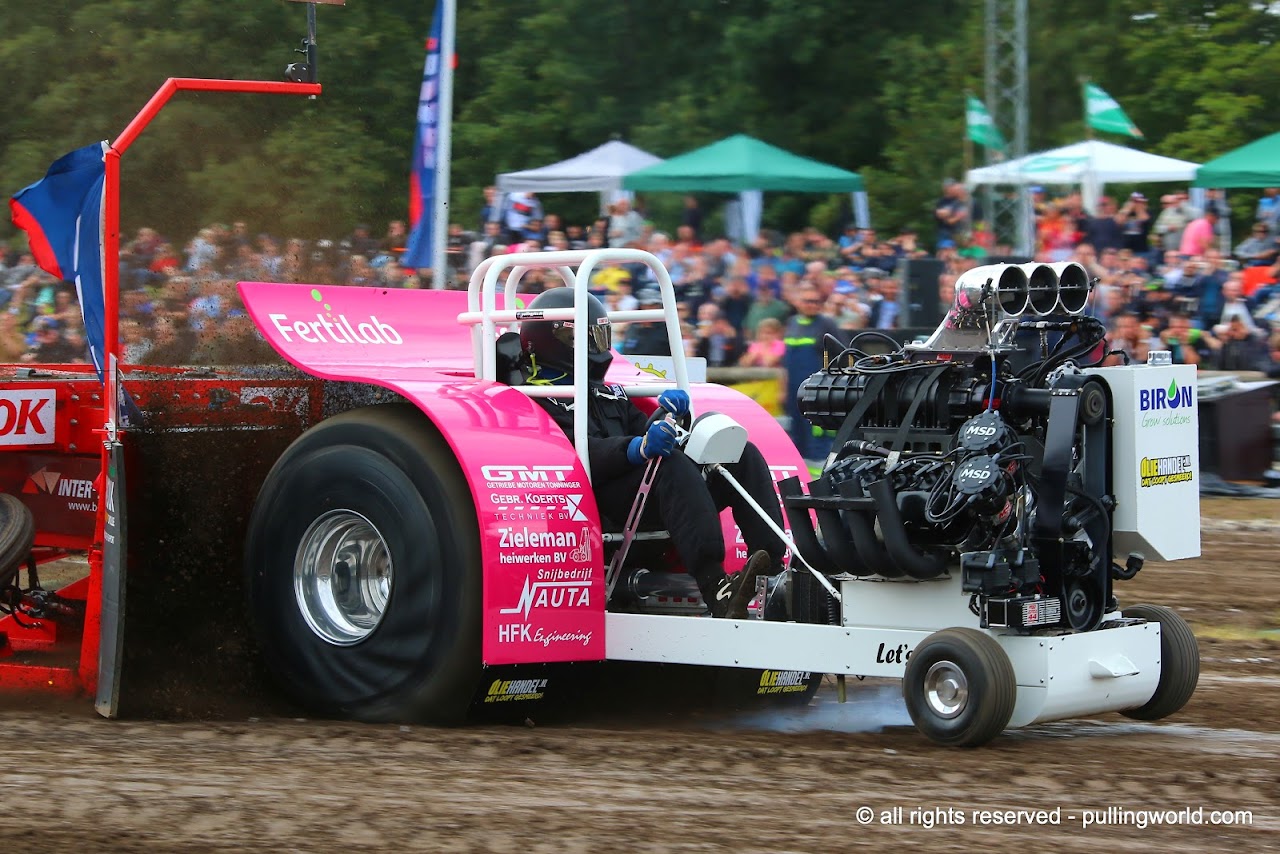