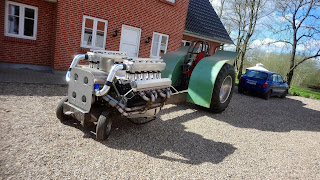 In the middle of May 2019, I had the chance to make a visit in the workshop of the Gladiator Pulling Team after the Euro Cup round in Allingabro, Denmark. The Team around Kim Andersen from Ejstrupholm, Vejle in Denmark are currently working on a new twin Rover V12 powered tractor for the 5500lbs / 2.5t light modified class.
The Gladiator Pulling Team was founded by Kim Andersen and Frank Christensen during the winter of 2006 / 2007. The team built their first tractor with a 6 cylinder Tatra semi-truck engine on diesel fuel for the 4t limited modified class in 2007. But after lots of problems in that year, Kim and Frank decided to replace the Tatra engine by a Rover Meteor tank engine with 2 turbochargers on petrol fuel. 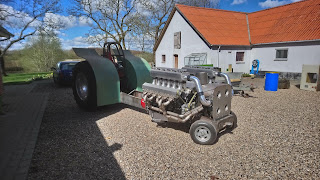 After problems with the carburetors and a huge engine damage at the end of the 2008 season, the carburetors were replaced by an Electronic Fuel Injection (EFI) system. After the switch to the EFI system, the engine ran reliably without any big problems.
Unfortunately during that time, EFI systems were not allowed in the 4t limited modified class, so the must switch into the 3.5t modified class. The Gladiator Team competed from 2009 until 2012 in the Danish Championship with this tractor and finished in runner up position in the 3.5t modified class in 2012. During the winter of 2011, there came the first considerations to build a completely new ride for the 2.5t / 5500lbs light modified division. After the 2012 season, the Danish team started with the planning and building of the new tractor during the winter of 2012 / 2013. Since that time the 2 men team build on this new light modified machine. 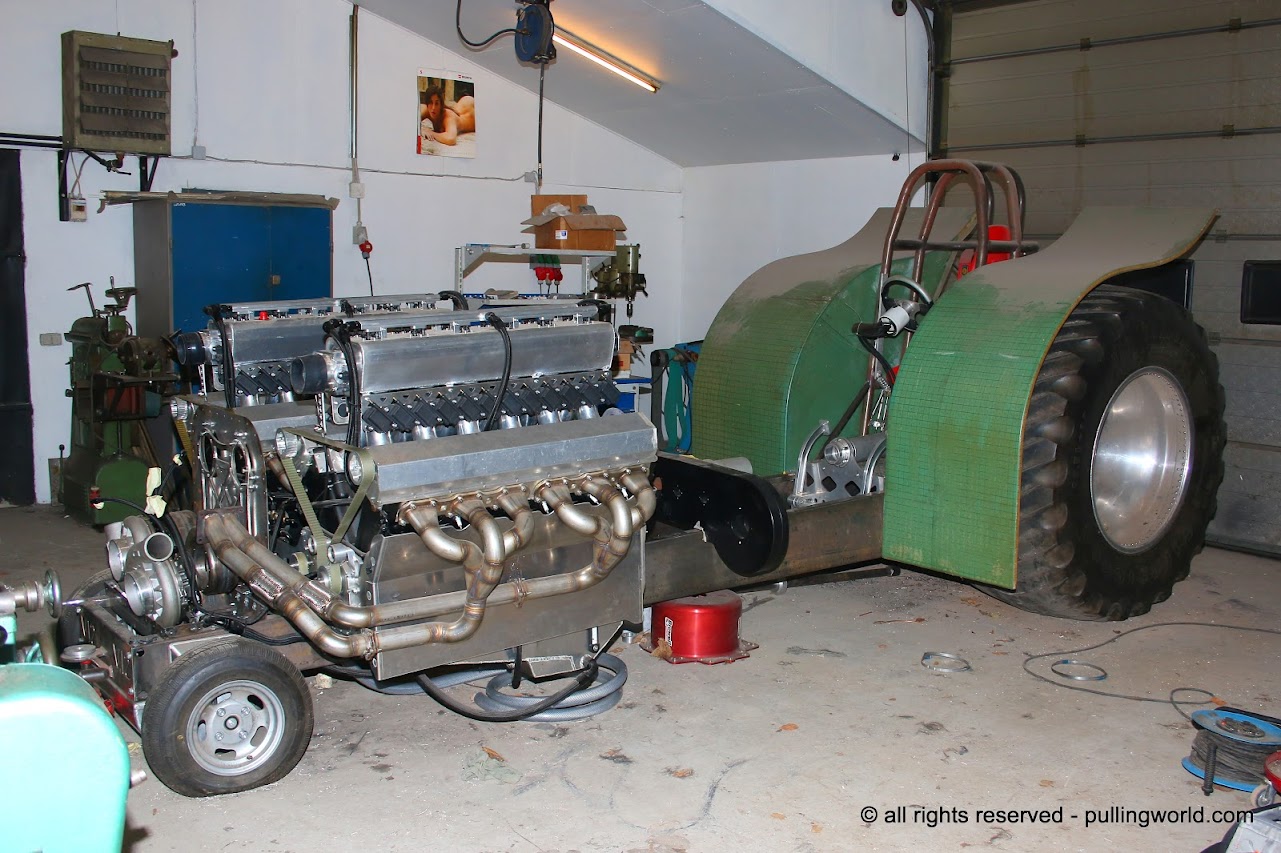 The new Gladiator will have a completely new homemade Domex wedge frame with a new Ace Chassis 2 bar chrome-moly roll cage from the USA, new engine brackets, a glass fiber driver seat with a 4 point OMP harness, a new homemade hydraulic steering, homemade steel wheelie bars and a newly constructed sheet metal rear end with a newly built drawbar.
The parts for the Domex chassis were laser cut and bent by a local metalworking company in Denmark. The brake pedals for the single wheel brake system are homemade and CNC-milled off aluminum.
The new sheet metal rear end received a Scania truck center section with a revised needle bearing Scania differential, a Scania stock ring and pinion gear, homemade axle shafts, machined Mercedes aluminum planetaries carrier housing with Mercedes planetaries and Van der Waal Pulling Parts aluminum brake calipers with laser-cut brake discs by the Hvilsom Pulling Team. The new rear axle housing with the center section and diff was built by the team himself. The Danish team also has built the rear axle housing for the Iveco V8 semi-truck powered light modified tractor called ''Elkaer Metal Boy'' of the Hvilsom Pulling Team from Hobro in Denmark in the past. 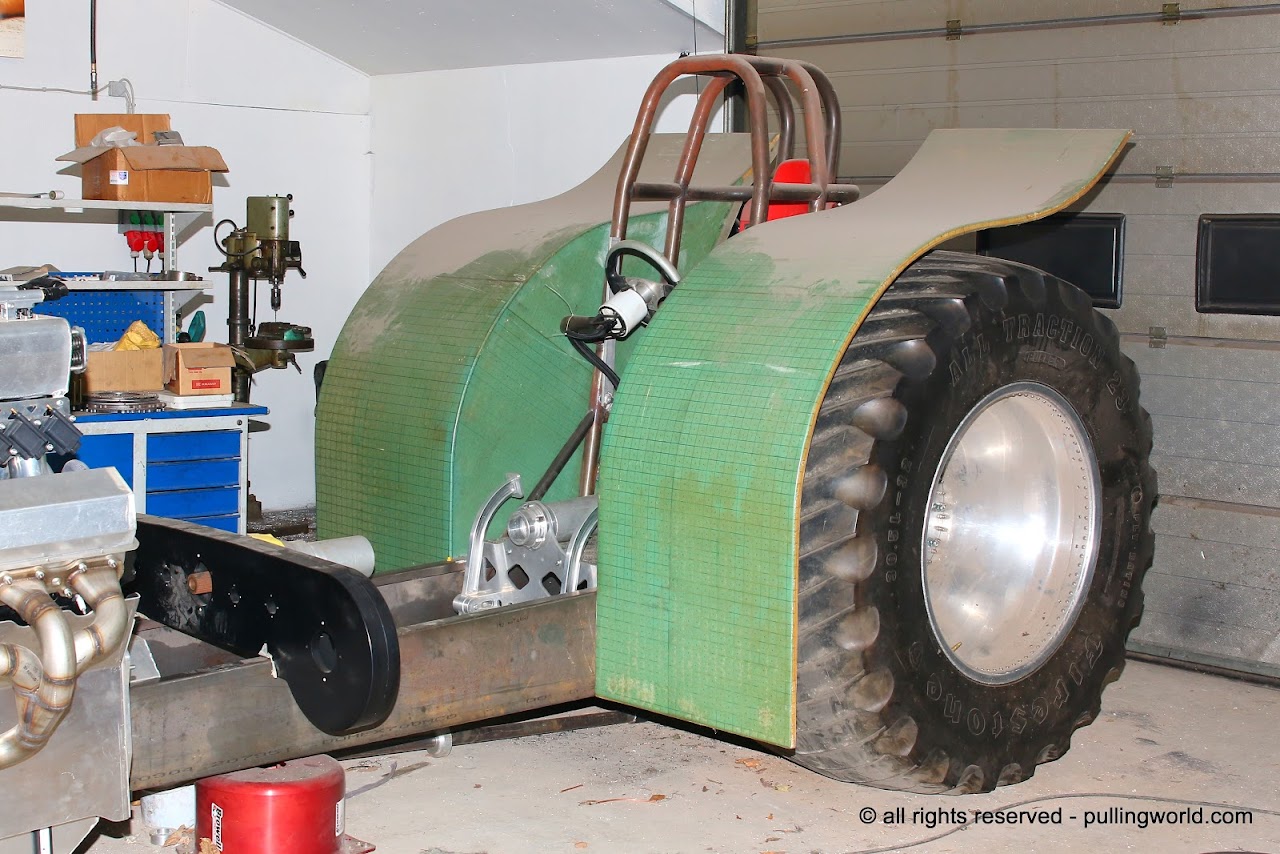 The new rear fenders of the light mod are made off glass fiber by the Gladiator Team himself. The new fenders are lighter compared to aluminum fenders, which saves a little bit weight on the tractor. The Team also have built those fenders for some other Danish pulling tractors like the Elkaer Metal Boy or the new Black Russian.
For the beginning, Kim and Frank have purchased a set of used polished Midwest aluminum rims with old cut Firestone 30.5-32 8 Ply All Traction Puller tires. For the future, they have planned to replace the old wheels by a set of new better Puller tires on new lighter aluminum rims. 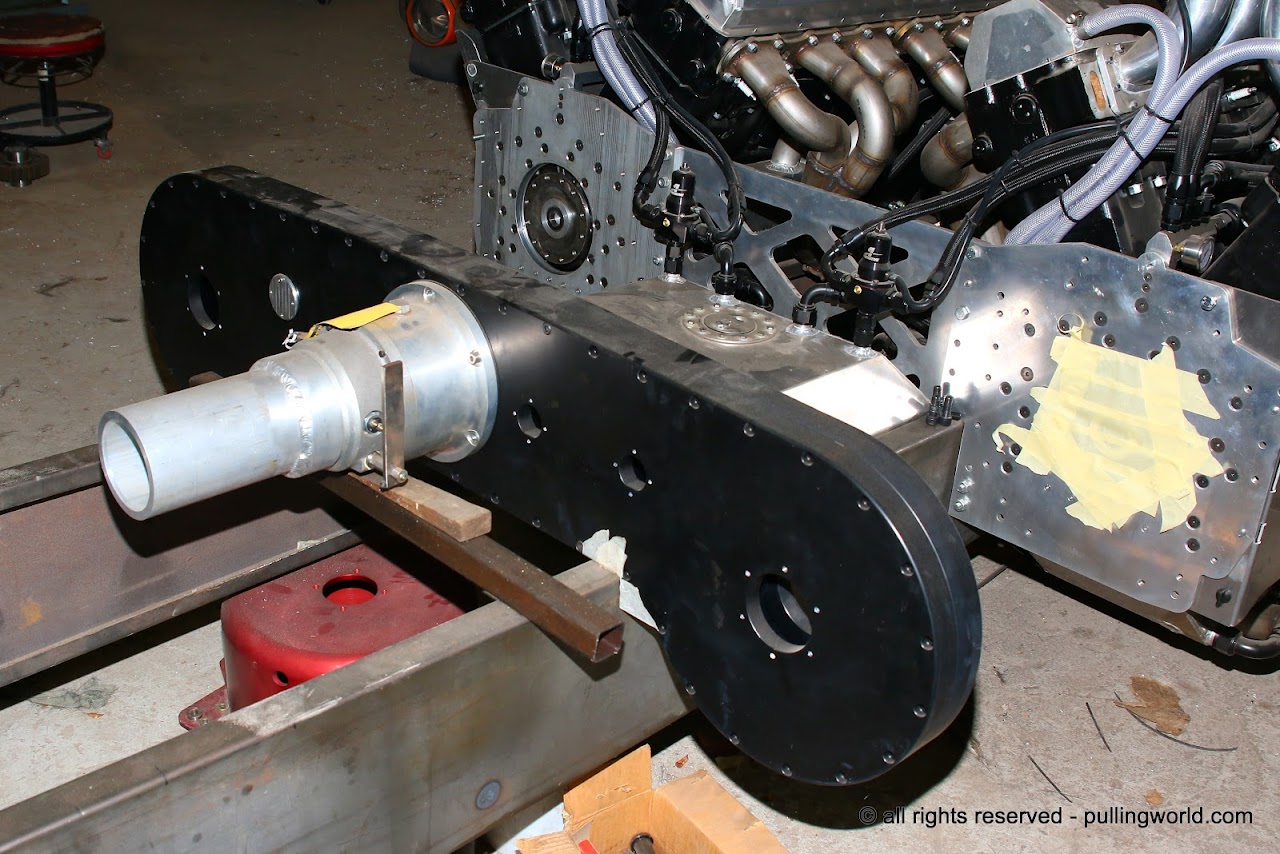 Also completely new will be the whole drive train of the machine. The new drive train will have a completely new crossbox, new billet steel driveshafts between the clutches and the crossbox, a SCS reverser and a billet steel driveshaft between the reverser to the center section of the rear axle.
Each Rover tank engine receives a new Molinari 8 inch centrifugal clutch with 3 sinter metal discs and a homemade aluminum flywheel. The clutches will be protected by a Browell aluminum clutch can.
The new crossbox has a homemade CNC-machined aluminum housing and will receive a set custom-built gears with custom-built steel shafts.
All the custom-built gears for the crossbox were also machined by the Hvilsom Pulling Team from Hobro in Denmark. The SCS reverser will be mounted directly on the housing of the crossbox.
All the calculations for the crossbox and the rest of the drivetrain were done by the Team himself. 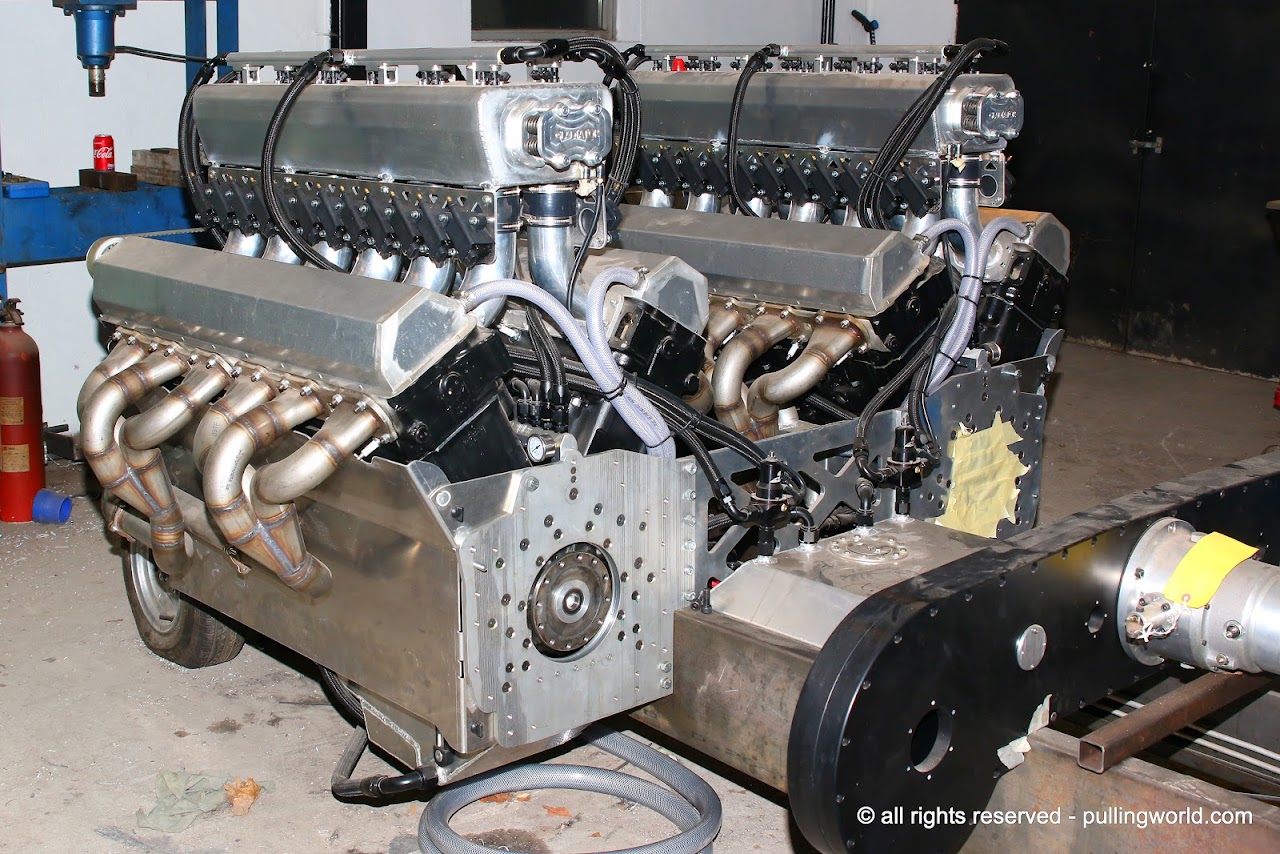 The new Gladiator light modified tractor will have 2 turbocharged Rover Meteor V12 tank engines with a capacity of 27l on methanol fuel. With those English tank engines, the team would like to go a different way compared to what did the De Jong Special Team from the Netherlands or the Gators Pulling Team from Denmark.
The Rover Meteor V12 engine is a British tank engine which was actually developed and built by Rolls Royce during the second world war. Initially manufactured by Rolls-Royce itself, the production was quickly outsourced to the Leyland company (Rover belongs to the Leyland group) in Luton, so that Rolls-Royce could concentrate fully on the production of Merlin and Griffon aircraft engines. It was developed from the Rolls-Royce Merlin aero-engine by W. A. Robotham and his chassis design and development division at Clan Foundry, Belper, as they were not involved in aero-engine work and his engineers were under-used. With the aid of engineers from Leyland, who were engaged in tank work, he considered RR's two V12s. The Kestrel, while having more power than the existing "Liberty" or Meadows engines, did not provide the desirable 20hp per ton required, so the Merlin III was chosen. Robotham was at pains to point out that Rolls-Royce could not manufacture the engines, so would not benefit commercially. 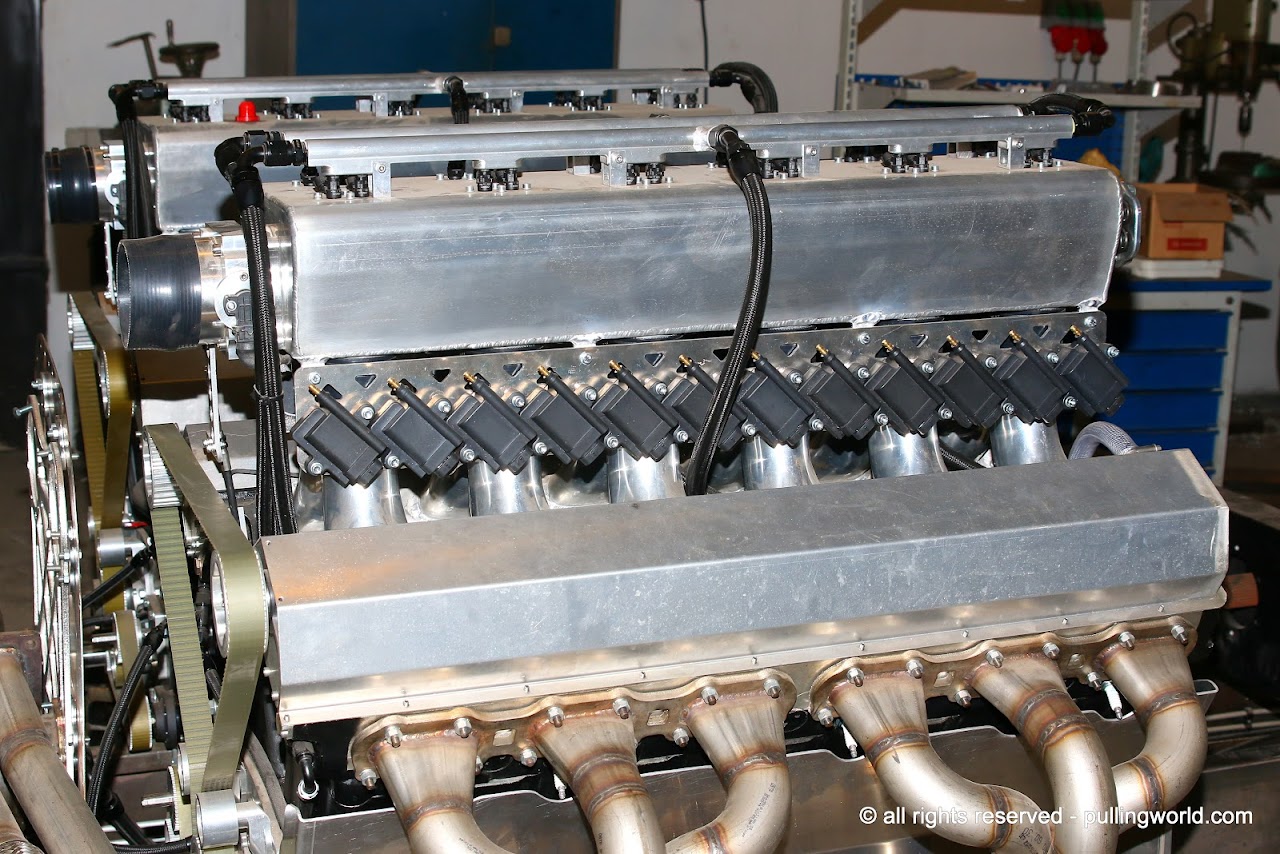 The Directorate of Tank Design (DTD), on 27 April 1941, supported the production of the Meteor, eventually placing orders direct with Rolls-Royce to maintain development in connection with the Cromwell tank. A new tank specification, A27M, was produced for the design of the Meteor-powered tank. The Meteor engine went on to become one of the most successful British tank engines.
The Rolls-Royce Meteor / Rover Meteor comes directly from the Rolls-Royce Merlin aircraft engine, a V-12 cylinder gasoline engine with a 60 ° cylinder angle and liquid cooling, which was used during the Second World War in various British fighter planes (Hawker Hurricane, Spitfire Mk.I-IX), US - American fighter planes (Curtiss P-40, P-51 Mustang) and British bombers (Handley Page Halifax, Avro Lancaster, De Havilland DH.98 Mosquito). Later the engine was also installed in some British and Canadian civil airplanes such as the Avro Lancastrian or in the Canadair North Star. 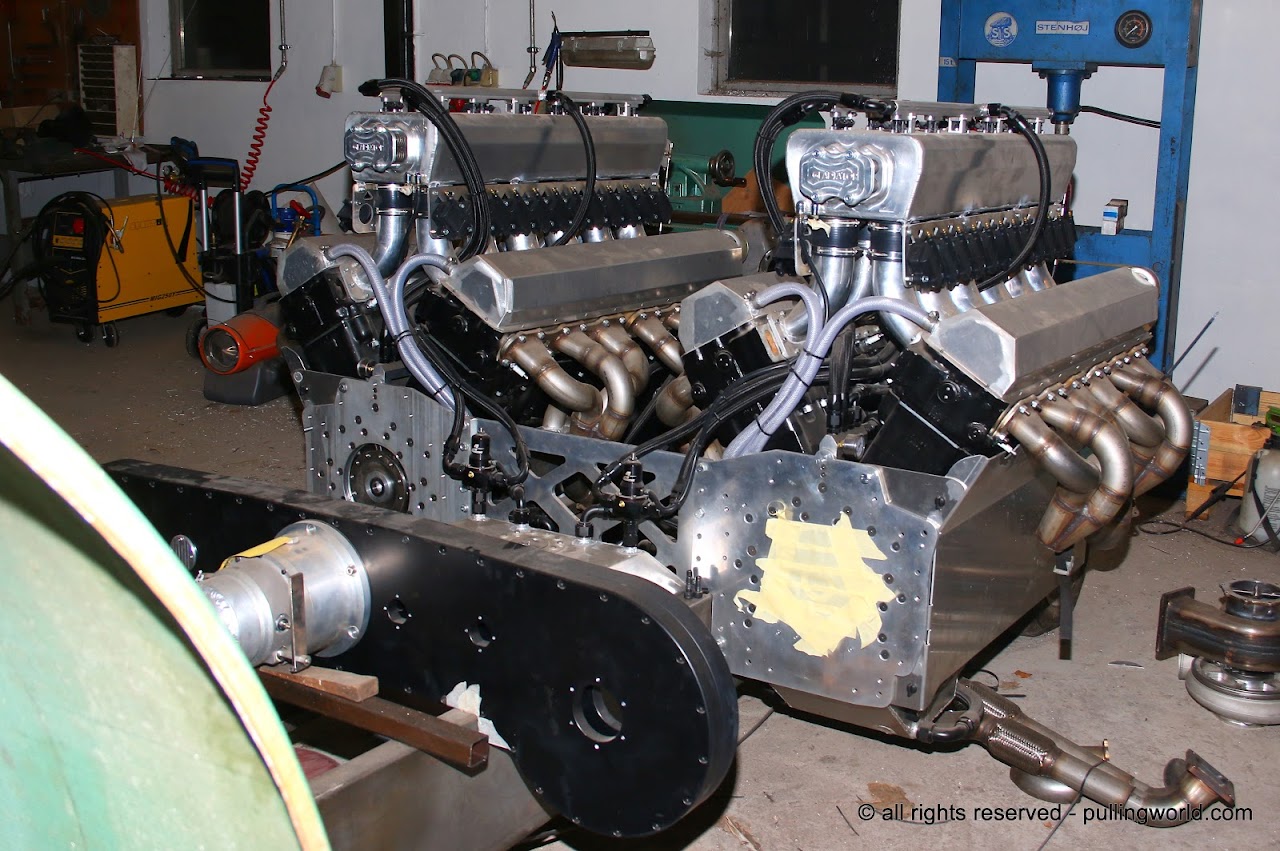 The Merlin was only slightly modified for use as a tank engine. The radial supercharger customary for the Merlin was omitted, the mixture preparation was equipped with other carburetors and, depending on the version, the output was reduced to 600 hp (447 kW) at 2000 rpm or (later) 650 hp (485 kW) at 2200 rpm. The last version of the Meteor M120 (also known as the Fuel Injected Meteor) produced 810 hp (595 kW) at 2500 rpm with gasoline injection. This limitation of the power output to a balanced level brought a favorable torque curve and gentle operation, which benefited the service life and reliability. In contrast to the aircraft engines for tank engines, saving weight was not so important, so some of the more expensive light metal components of the Merlin were replaced by steel components in order to keep production costs low. Nevertheless, about 80 percent of the components were identical to those of the Merlin aircraft engine, which greatly simplified production. The Rolls-Royce Meteor proved to be a successful conversion of a proven engine and was considered to be very reliable and easy to maintain. Due to its multiple-use, it is one of the most successful tank engines ever. The tank engines were built from 1941 until 1964 by 4 different companies, Rolls Royce Limited, Rover, Morris Motors and Meadows in England. The Rover V12 power plant was used in the Centurion, Comet, Cromwell, Tortoise, Conqueror and Charioteer tanks. 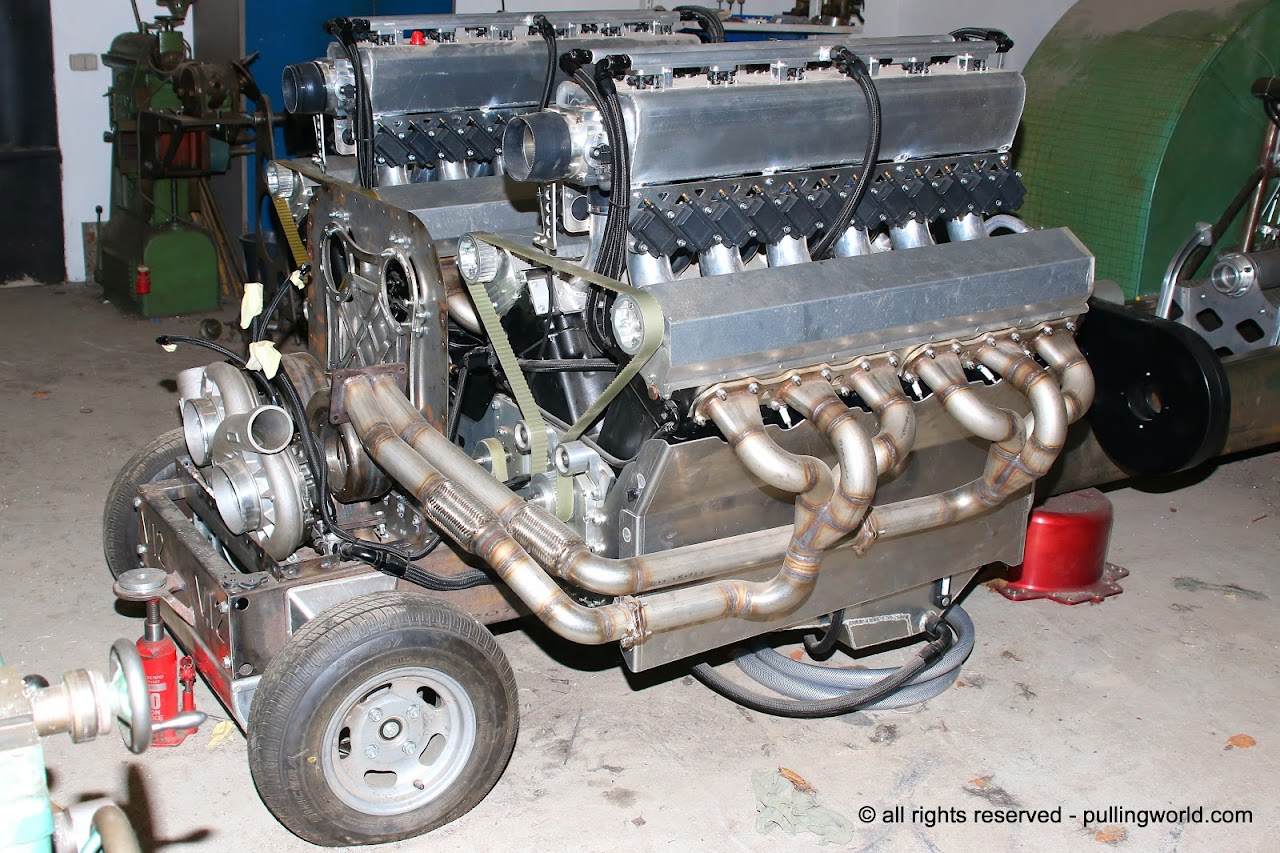 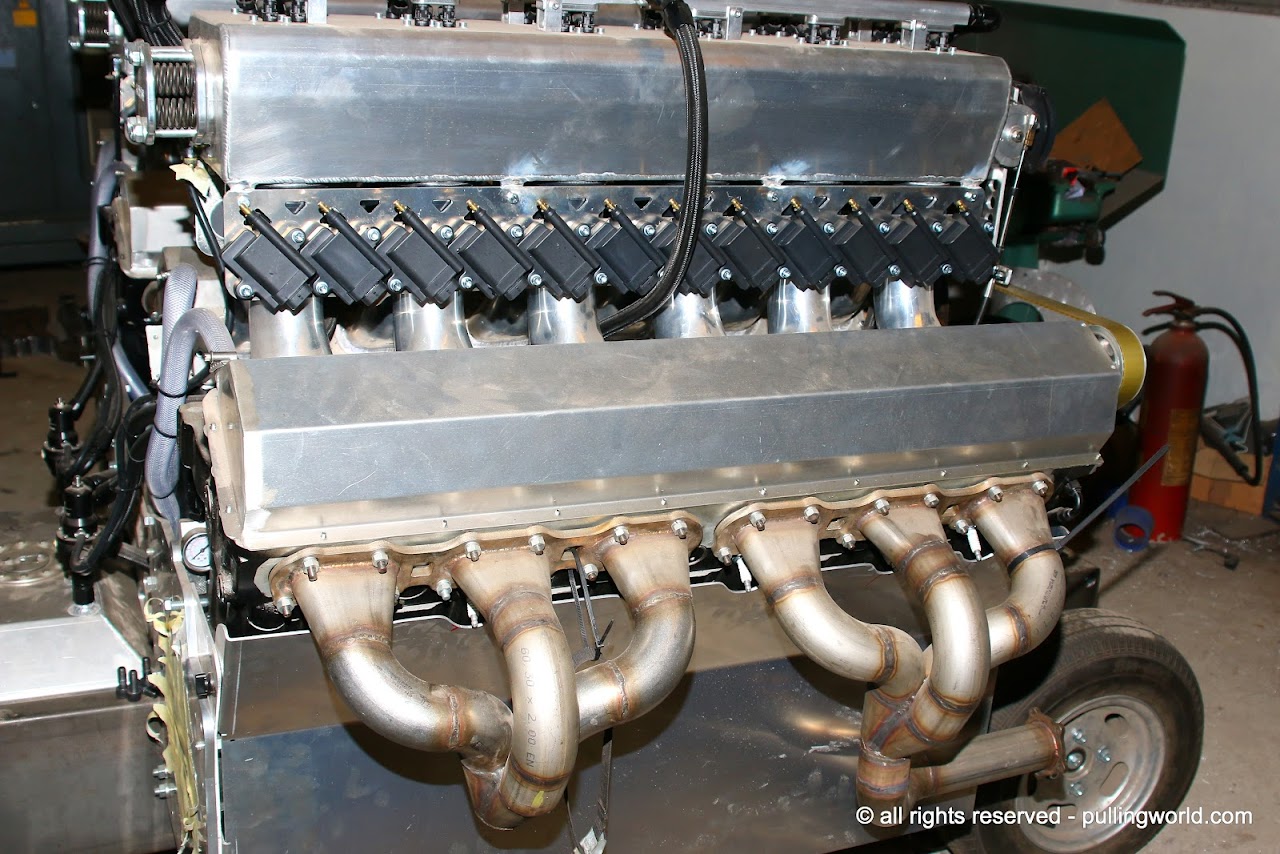 With the EFI system on the engines, the Team will have the possibility to make safe horsepower in the future. With the system, they can monitor and adjust every single cylinder on the power plant. They can monitor with a laptop the temperatures, the turbo pressure, the amount of fuel, the rpm's and the whole ignition system.
An example of the system:
If running one cylinder too lean and getting too hot, the system shuts off the ignition and the fuel of the cylinder and prevents the cylinder from damages. After each run, the guys can evaluate the data of each engine on the laptop. With the software on the laptop, they can make different adjustments on the settings (like the amount of fuel on each cylinder) and they can upload different mappings on the system for the different conditions on a pulling event. The injectors for the fuel system are installed on the top of the intake manifold and will spray the fuel on the top into each intake of the cylinder. 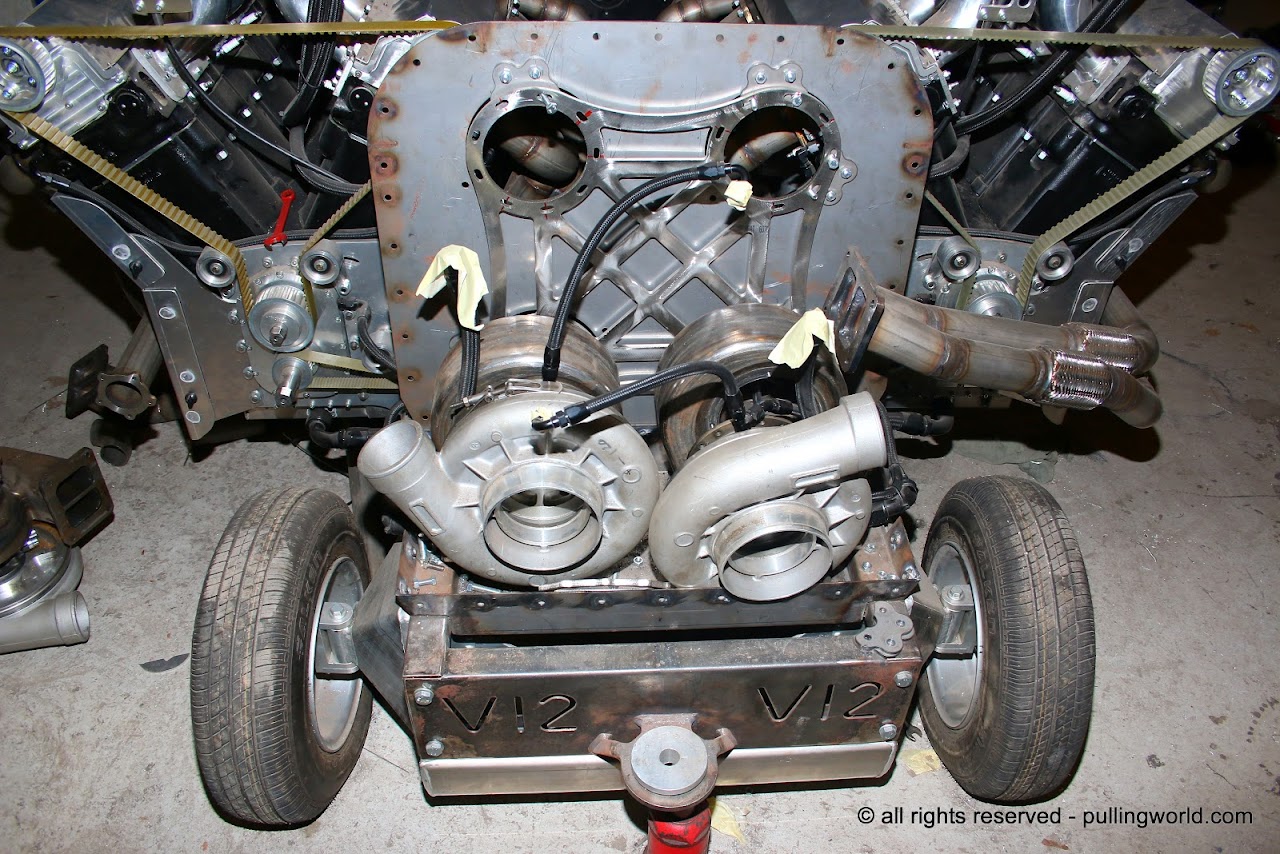 The new Gladiator will be not the first light modified tractor with an EFI system on the engines in Europe. The Green Monster Pulling Team from Füchtorf in Germany running on their Allison V1710 V12 aircraft engines very successful with EFI systems for many years.
In the big steel sheet metal box on the front end of the chassis are sitting all 4 Holset turbochargers of the engines. The 2 left chargers in the box are for the left Meteor engine and the other 2 are for the right one. 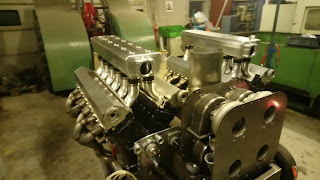 The box also is for the protection of the turbos and looks almost like a turbo kit of an alky burner super stock tractor.
All the exhaust air of the 4 turbochargers goes into a large homemade stainless steel exhaust pipe. Like the turbos, both engines are sitting as far forward as possible on the chassis, because of the heavyweight of the tank engines there will be not very much moveable weight leftover in the end. With this weight displacement, the team hopes to have a good balance with the light mod on tracks with a lot of traction in the future.
But all in all its still a lot of work to do on the machine before we will see this new exciting project on the track in the future. 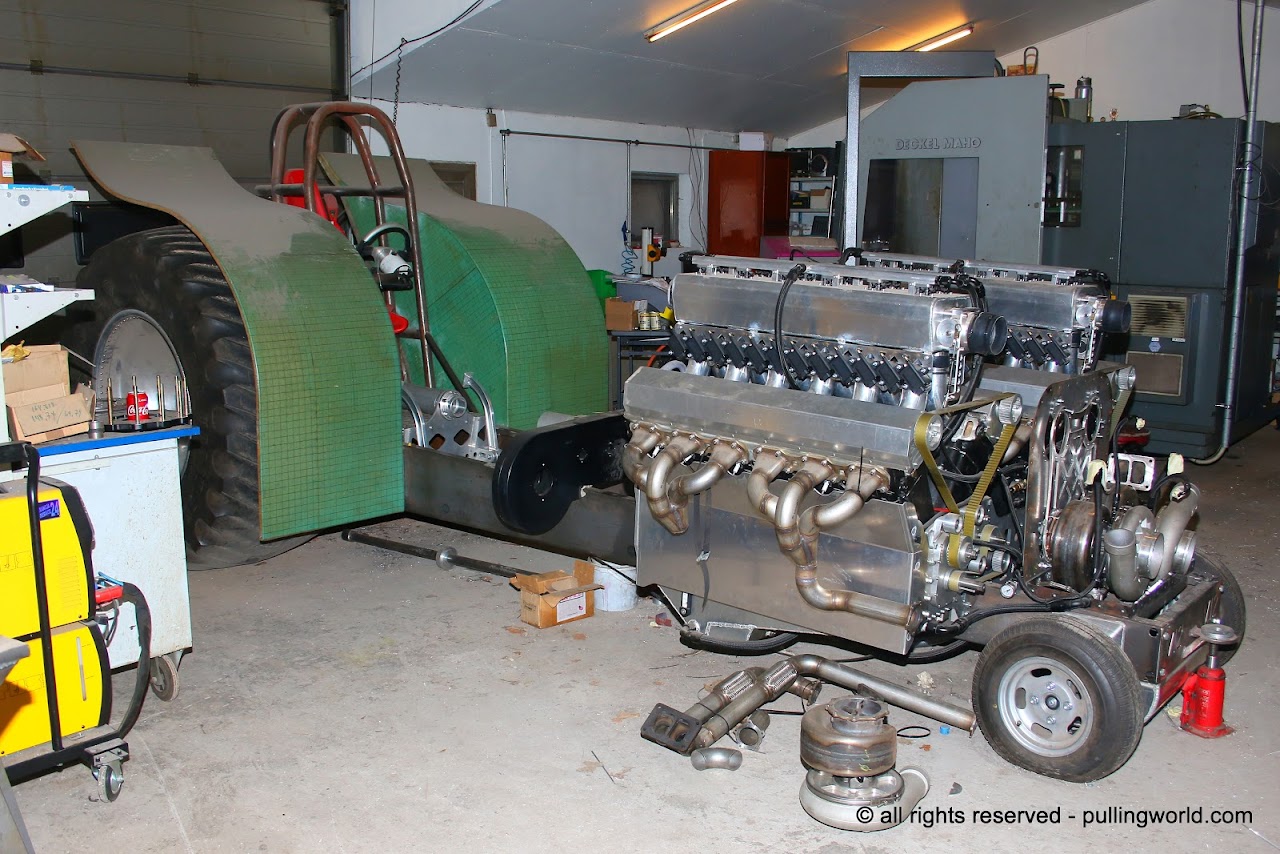 At the end of August this year, there came the shocking news from Denmark. The team wants to sell their unfinished project because of less time during the last months. Kim Andersen is a service mechanic by trade and he's also a lot underway in Europe during the year and his teammate is working as a blacksmith and also had not so much time anymore for the project. That's why the team have decided to sell their light mod tractor with all the spare parts.
On the 22nd of September 2019, the whole tractor included with all the spare parts was sold to the Green Spirit Pulling Team from Biervliet in the Netherlands. 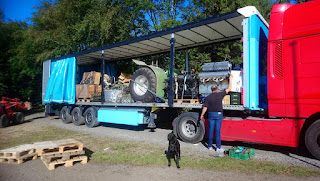 The Green Spirit Team has purchased the whole stuff because of their new project for 2020. They want to use lots of parts of that unfinished light mod project for their new tractor, which should come on the track in spring 2020.
So that means we will never see the turbocharged twin Rover V12 project on the track in the nearby future, which is very pity.
But Kim has told me after the sell of the tractor, they are not stopping with tractor pulling and have the plan to switch to the hood classes. We will see what rolls out of the Danish workshop maybe next year. 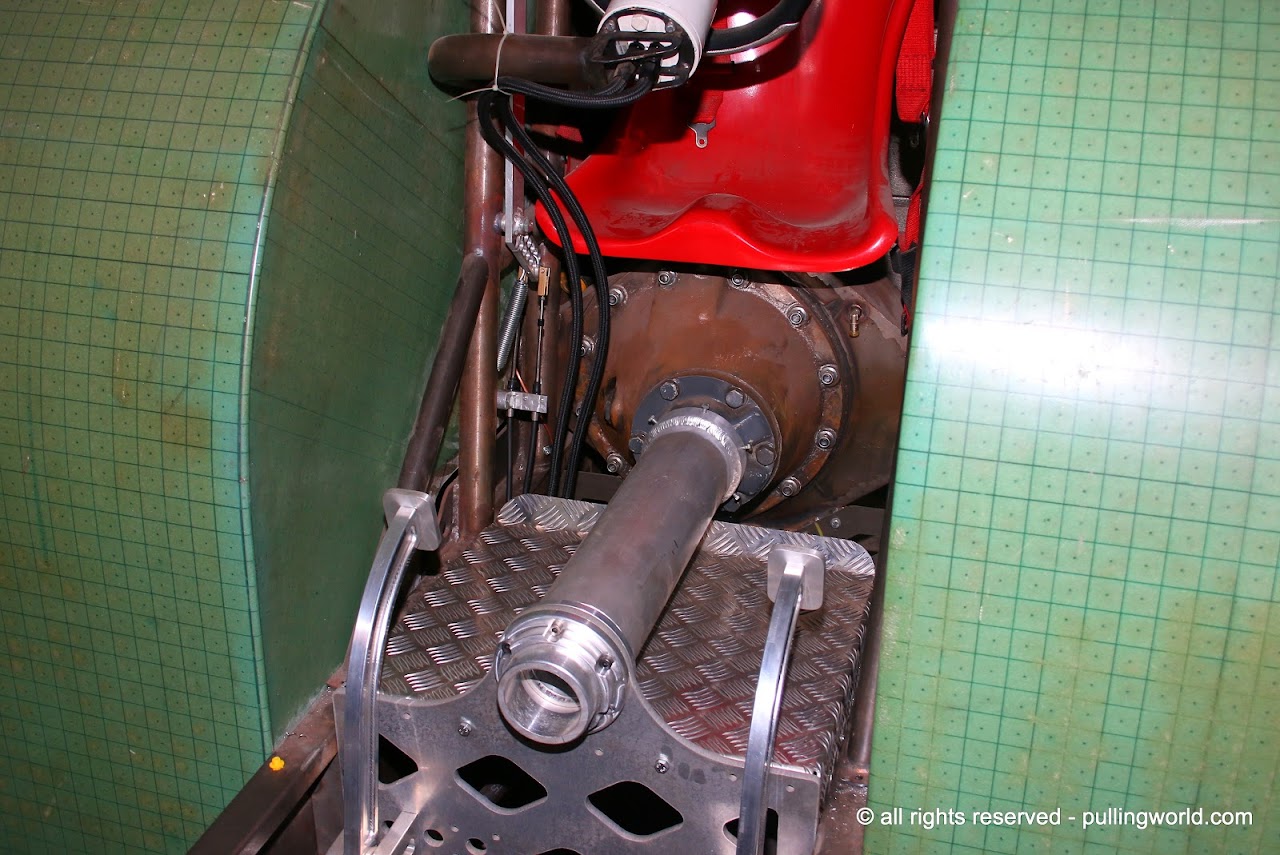 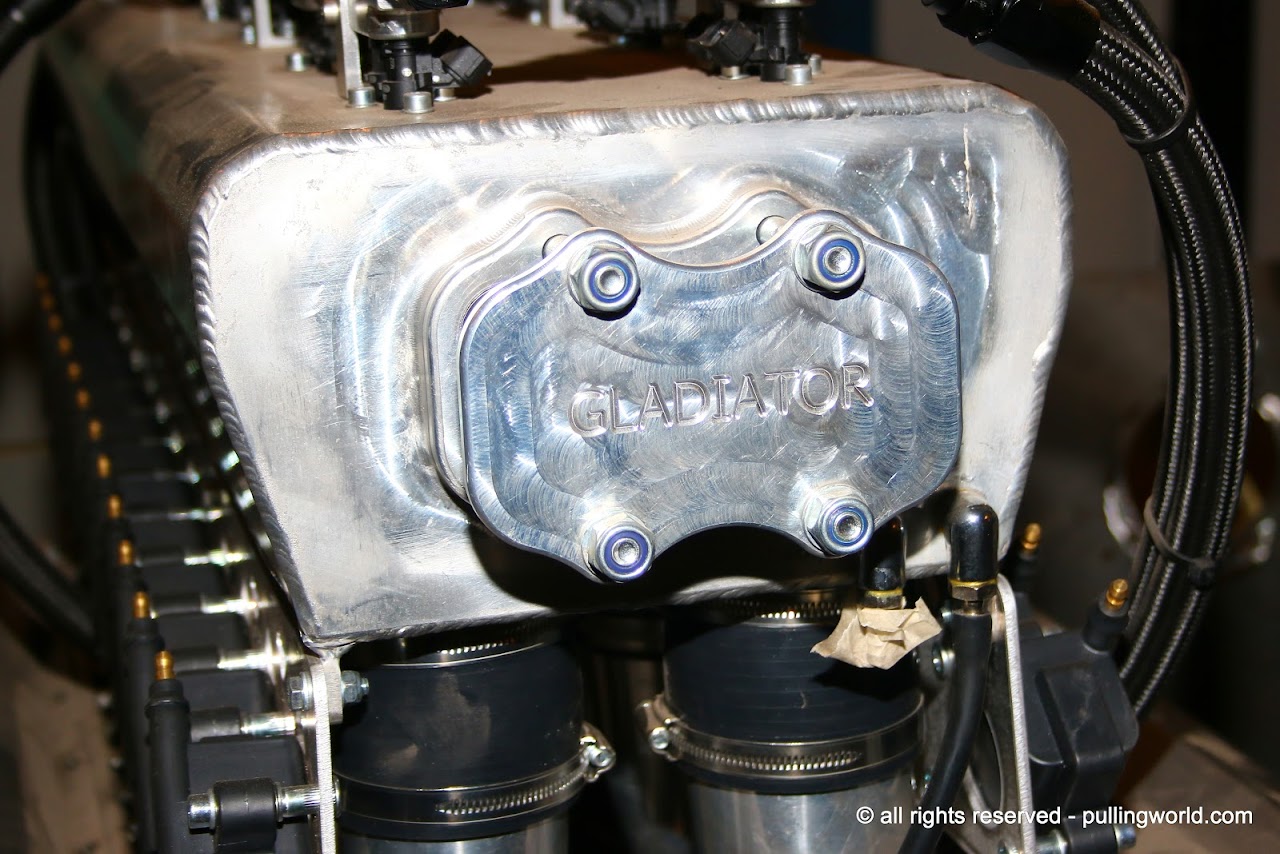 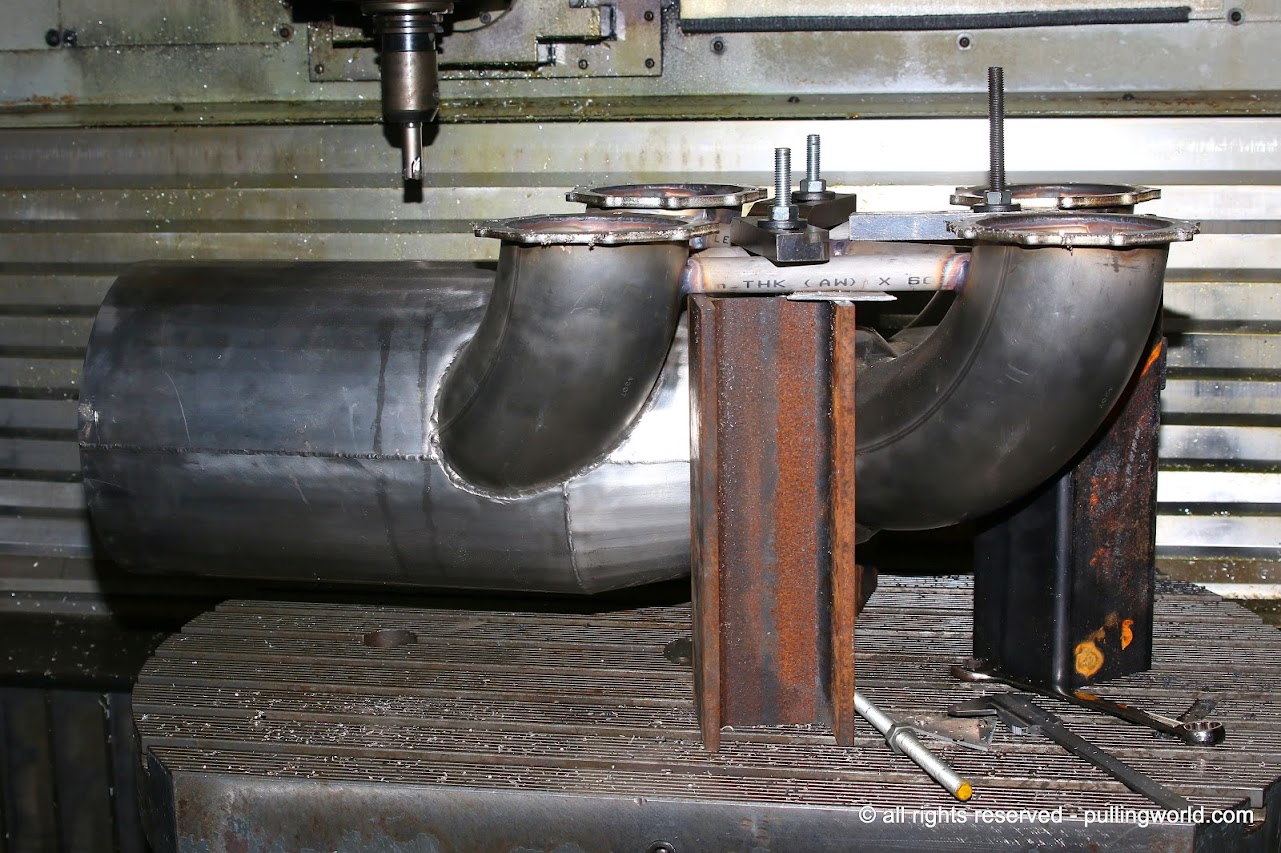 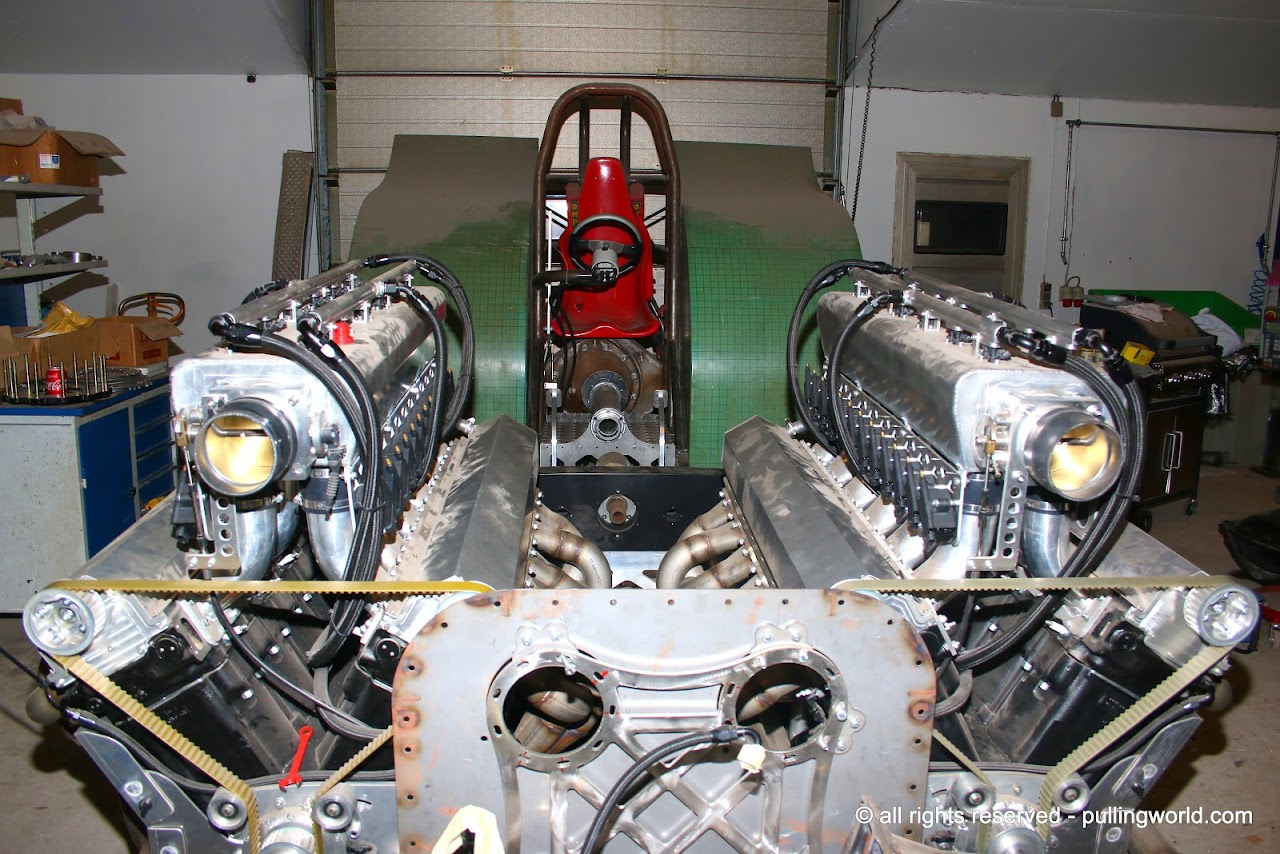 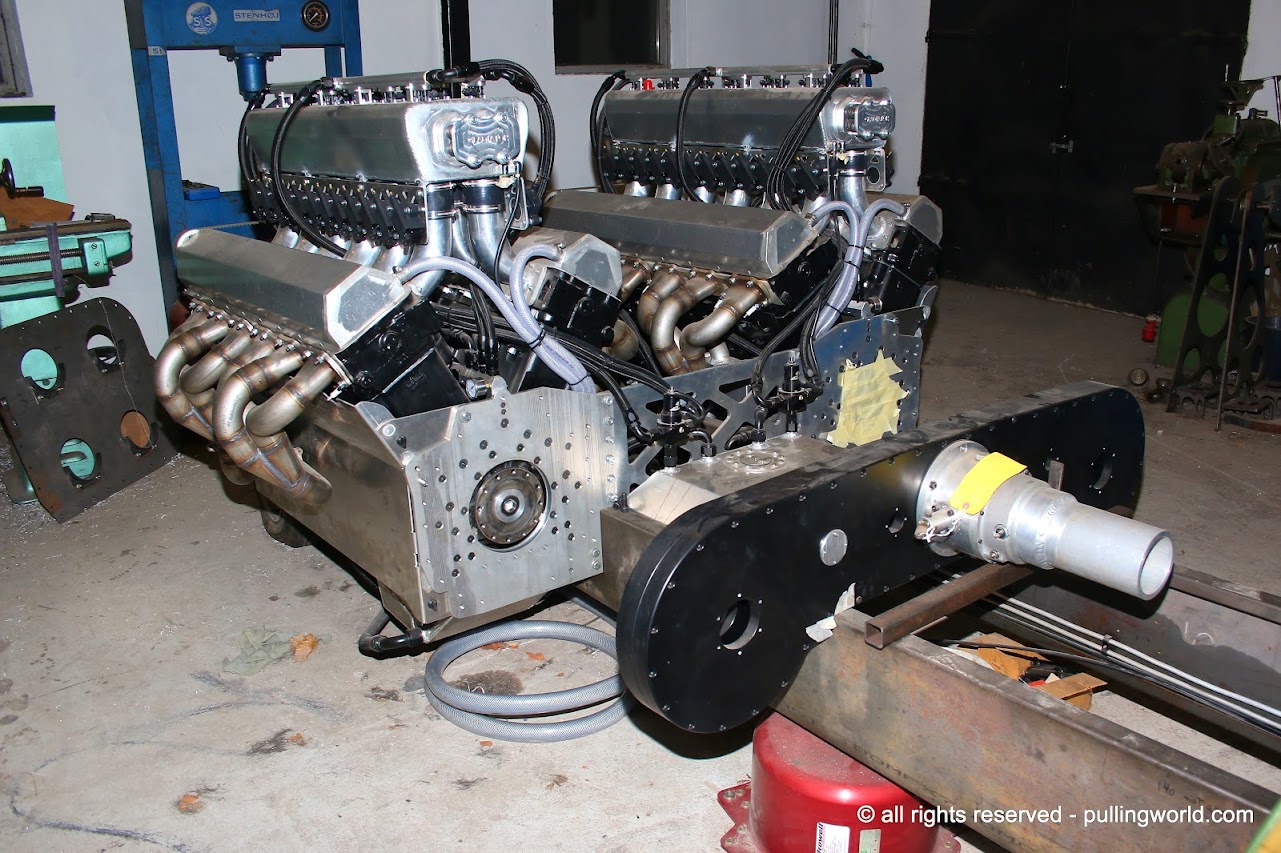 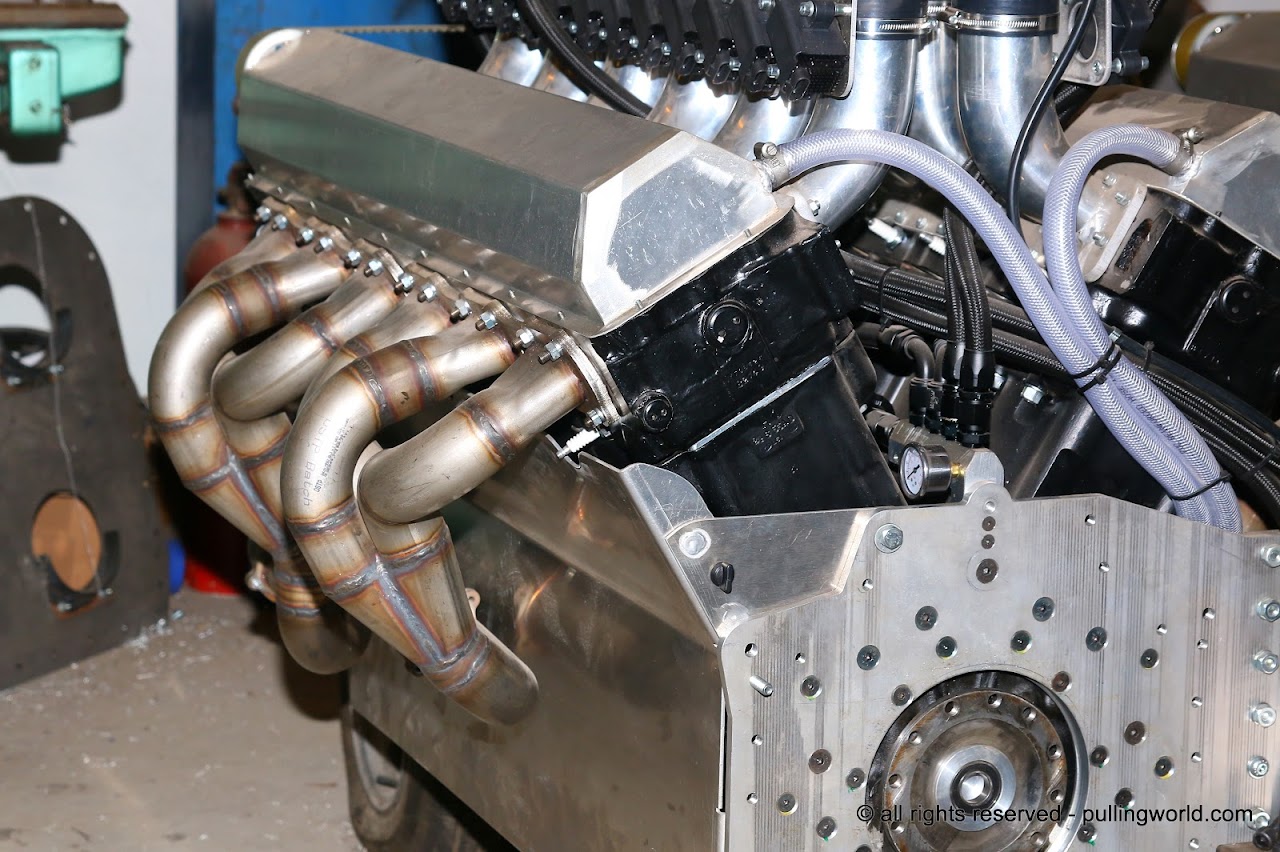 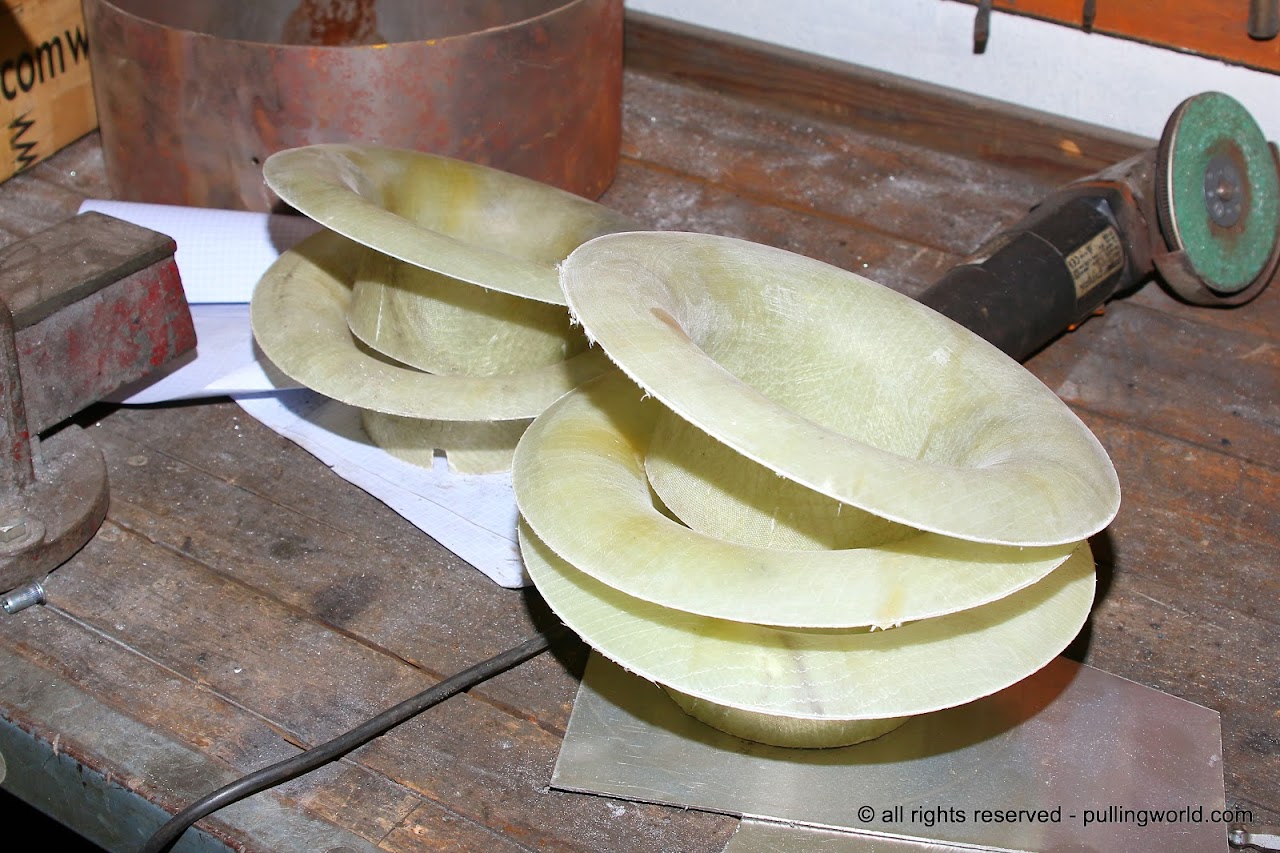 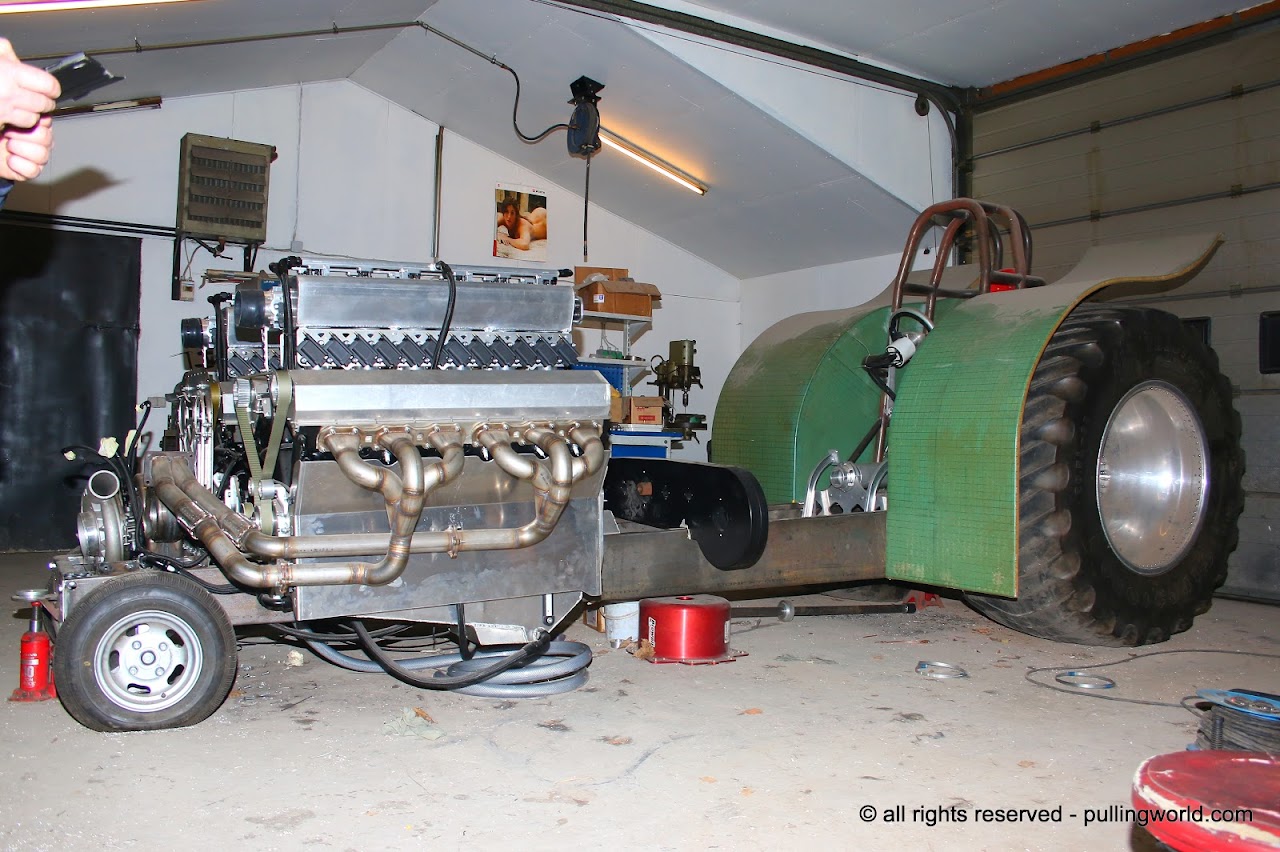