First pics and news of the new Silver Bullet 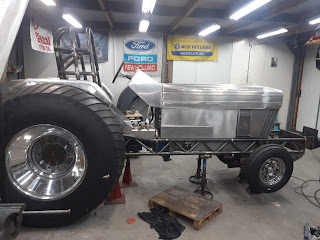 From Houten, in the Netherlands, the Silver Bullet Pulling Team around Martin and Justin van Echtelt are currently building on a completely new Ford component tractor for the 3.5t / 7700lbs limited super stock class. After 28 years in tractor pulling, Martin and Justin decided to build a new limited super stock tractor at the end of 2018.
The Silver Bullet Pulling Team was founded by Martin van Echtelt in 1990. Since that the dutch team competes with tractors of the Ford / New Holland brand. The first super stock tractor which the team have built was on the base of a Ford 7810 in 1990. Martin and his crew competed with the tractor in the Dutch Championship and also on some pulls outside of the Netherlands from 1990 to 1992. 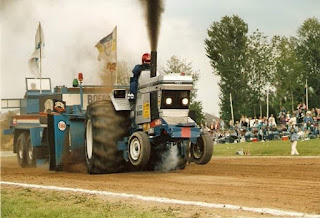 The super stock was powered by a 6 cylinder Ford engine with a displacement of 6.6l and 2 turbochargers on diesel fuel. During the winter of 1992 / 1993, the team from Houten built a new super stock machine and replaced the 7810 silver tractor. The old machine was replaced by a Ford 8630 with a 6 cylinder Ford engine and 3 turbochargers on environmentally friendly biodiesel. At that time it was the first and only European super stock tractor which ran on biodiesel fuel. The team competed with the silver-blue 8630 Ford from 1993 until 1997 in the 3.4t and 4.4t super stock class. 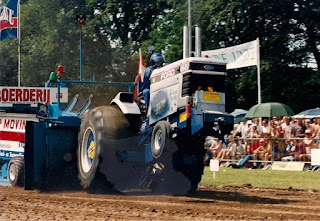 After the 1997 season, the dutch guys decided to make the switch on alcohol fuel. For that new mission, the old tractor was completely new rebuilt, received a new lighter steel wedge frame and the old Ford 8630 hood and fenders were replaced by a new Ford - New Holland 8670 hood and new 8670 fenders. Also, a completely new Ford Powerstar engine with a displacement of 7.5l was built for the tractor. The powerplant had a revised stock head with bigger valves, a homemade intake and exhaust manifold, 2 Holset turbochargers, an MSD ignition and a VSP (Veldhuizen Special Products) alcohol fuel system. The new Ford-New Holland tractor debuted at the tractor pulling event in Zaragoza, Spain in 1999. 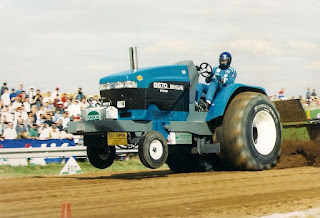 The tractor pull in Spain wasn't an international points round for the Euro Cup, it was a demonstration pull in the supporting program of an agricultural exhibition. The Silver Bullet Team competed with the cast rear end super stock tractor until 2012 before they made the switch to a component version of the tractor. During the winter of 2012 / 2013, Martin and his crew built a new super stock tractor on component base with the same engine as in the old tractor. The component machine received a new homemade chrome-moly tube frame with a custom-built 3 bar chrome-moly roll cage, a hydraulic steering and a Rockwell rear end with Mercedes planetaries. 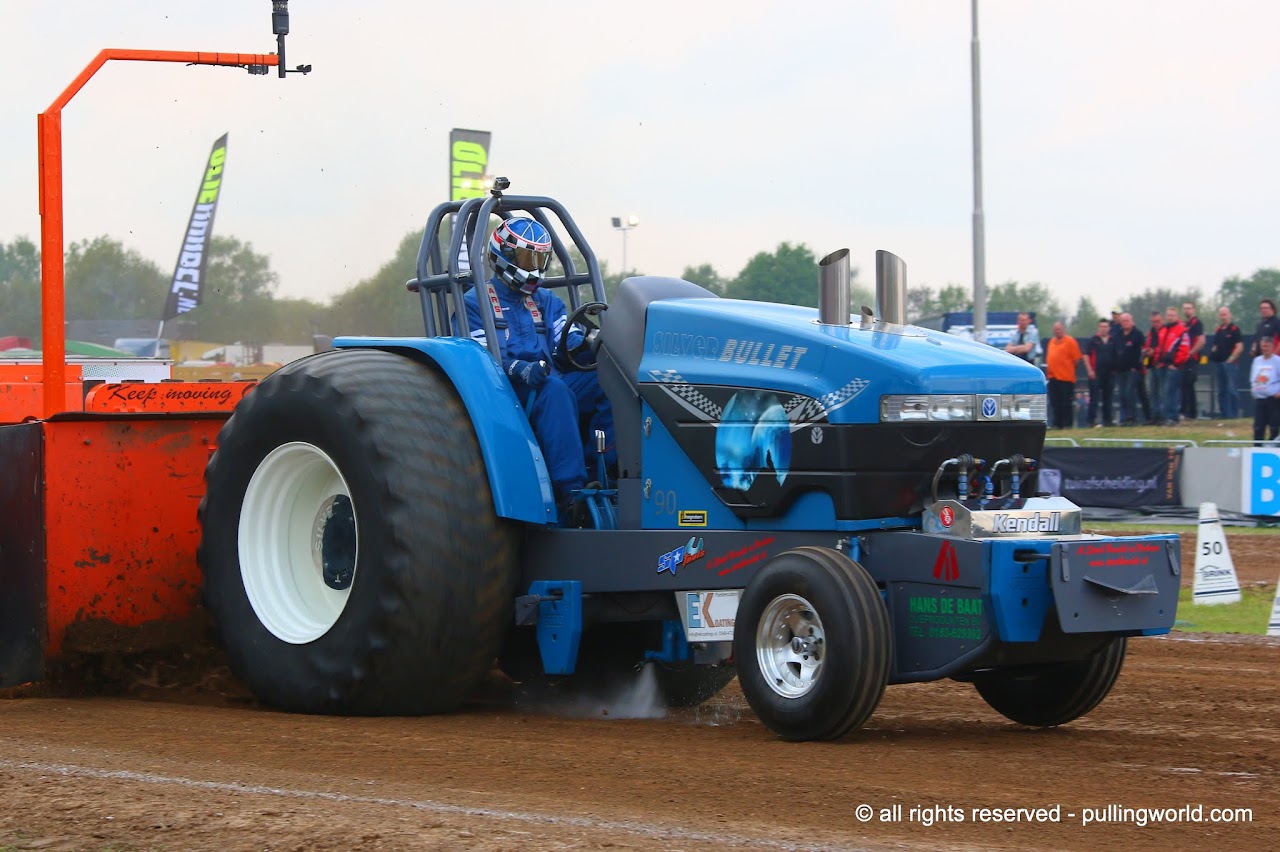 The hood and the fenders were taken over of the old Silver Bullet and received a new look. The new component Silver Bullet was much lighter, the driver's position was more forward and the center of gravity was lower compared to the old Silver Bullet with the stock cast rear end. With the new component chassis, they had much more movable weight and a much better balance on the pulling tracks with a lots of traction.
The last big changes on the Silver Bullet were made during the winter of 2014 / 2015.
Martin van Echtelt made the step from 2 turbochargers to 3 turbochargers on the Ford engine after 15 years on methanol. In the first competitions, they struggled a bit with the setting of the engine, but they solved all problems during the 2015 season and the power plant then ran well. At the end of 2018 season, The Silver Bullet Team announced on their Facebook page to stop from the super stock class, after that the tractor was sold without the engine to someone in the Netherlands. 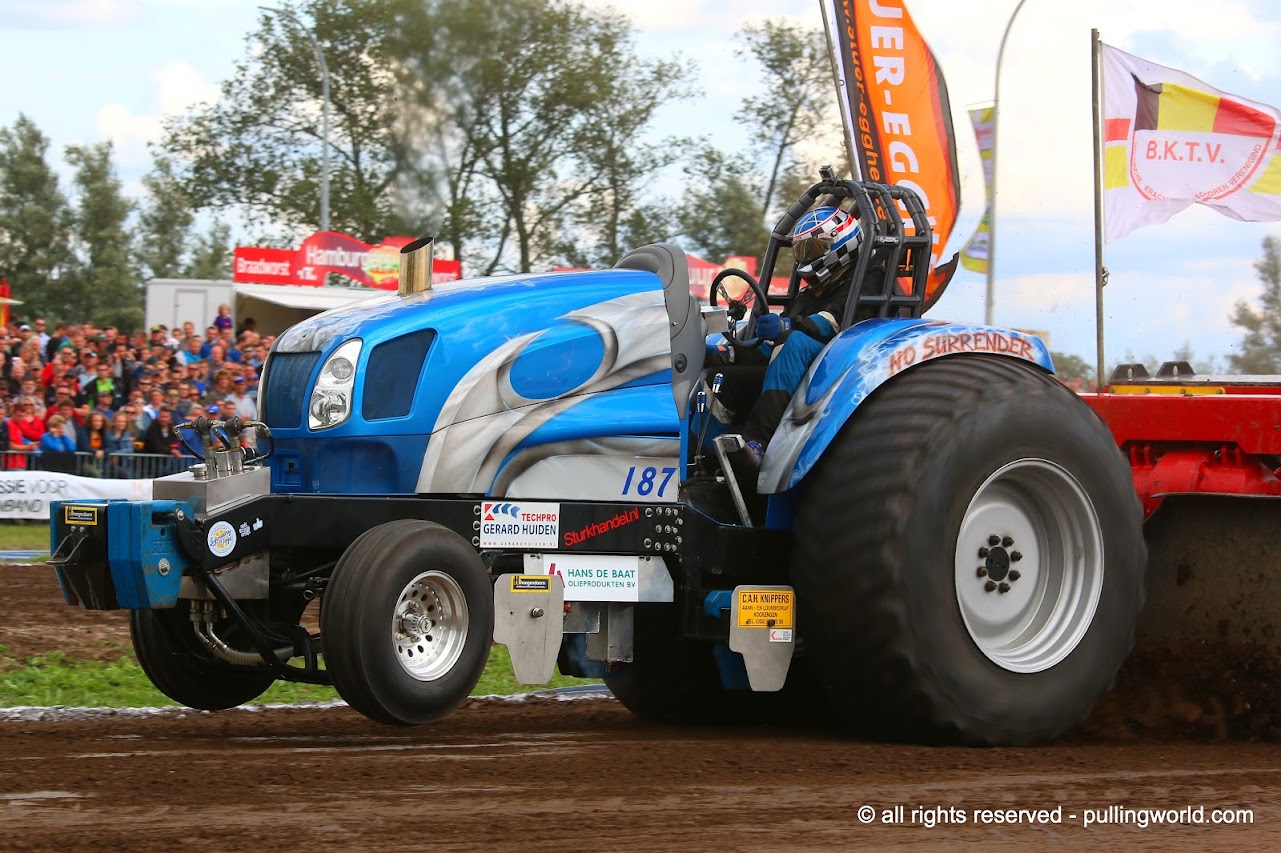 In 2002, Martin van Echtelt and his Team started with the next project, a 3.5t / 7700lbs limited super stock tractor, which was later called ''No Surrender''. They worked on that project for around 10 years in their workshop in Houten. The No Surrender was ready to run in 2012. The No Surrender was one of the first limited super stock tractors in Europe. The tractor had a homemade steel wedge frame with a homemade 3 bar steel roll cage, a custom-built hydraulic steering, a Ford rear end and transmission housing and a New Holland T6080 hood. The limited super stock was powered by a 6 cylinder Ford Powerstar engine with a displacement of 7.4l with a single Holset turbocharger on alcohol fuel.
The New Holland tractor ran pretty well and the team had lots of success with the machine in the 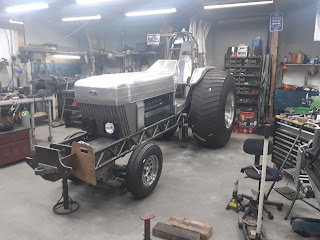 Dutch Championship from 2012 until 2019. At the end of the 2019 season, No Surrender was sold to a new owner somewhere in Europe. After Silver Bullet was sold in the end of 2018, the Team started with the building of the new tractor for the limited super stock class.

For the new component tractor, they decided to build a new chrome-moly tube chassis. With the new component version, they will have much more movable weight compared to the old No Surrender limited super stock with the Ford stock gearbox, clutch bell and rear end housing. The new component limited super stock ride will be 200-300kg lighter compared to a limited super stock with the stock parts. Other advantages are the clutch and the engine in the chassis can be changed easily in a short space of time, which makes the maintenance much easier for the team during a pulling season. Another point is the new chassis is designed in such a way that the 7.4 liter Ford Powerstar engine can be exchanged in an hour with the 8.3l version so that they comply with the ETPC regulations. 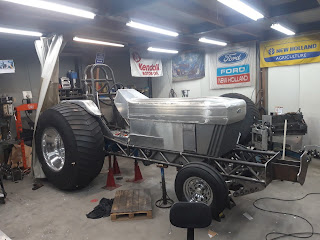 The new component tractor receives a homemade chrome-moly tube frame with a homemade chrome-moly 2 bar roll cage, a homemade hydraulic steering with a newly built homemade front axle suspension, a Kirkey Racing driver seat with a 4 point harness and a modified Rockwell rear end with a newly built drawbar. But what is different on the new chassis compared to the other ones that they have built for their other machines in the past.
The drivers position on the new tractor is more forward and the center of gravity is lower compared to the old Silver Bullet Super Stock and No Surrender Limited Super Stock tractor. Also, the position of the engine is more forward and the center of gravity is lower. The Dutch Team hopes to have a better balance with those changes on the pulling tracks in the nearby future. 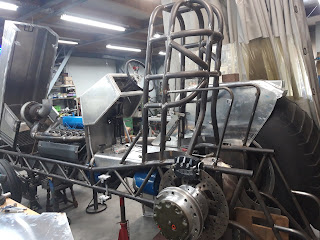 The Rockwell rear end was shortened and received a Rockwell aluminum stock center section with a needle bearing differential, a Rockwell ring and pinion gear, custom built hub reductions, modified aluminum Mercedes/MAN planetaries carrier housing with Mercedes/MAN planetaries and Van der Waal Pulling parts billet aluminum brake calipers with laser cut brake discs. The Rockwell rear end was modified by the Team himself. The rear end was modified because to safe weight for more moveable weight on the tractor.
The new limited super stock got an old Ford 7810 sheet metal hood and newly built aluminum sheet metal fenders. The hood isn't an original Ford 7810 hood, the hood on the new Silver Bullet is 15% bigger and is made off aluminum sheet metal instead of steel sheet metal which is much lighter compared to the original one. The hood wasn't built by the team himself. 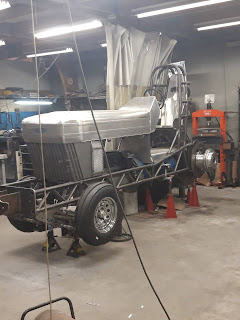 The Ford hood was built by former Super Stock competitor Henk Meilink from the Netherlands. Henk Meilink is the former driver and owner of the John Deere Diesel Super Stock tractor called ''Kofo Power Roughneck'' which competed in the Dutch Championship and in the Euro Cup in the mid-90s.
The Ford 7810 was the first tractor with which the newly formed company "Ford-New Holland" presented itself on the market. However, the idea did not come from Ford, but from South Essex Motors (SEM). In this model, a 6 cylinder was inserted into a 4 cylinder chassis. Ford-New Holland bought this idea and launched the Ford 7810 in March 1988. This compact 6 cylinder quickly became a market success, which was also due to its attractive pricing. Due to the time of its market launch, the model joined the Model II series. The 7810 stock tractor had a Ford synchro shift transmission combined with dual power powershift, a Carraro steering drive axle, 4 wheel drive and a natural aspirated Ford 6 cylinder engine on diesel fuel. The power plant of the 7810 Gen 3 had 100hp with a torque of 399Nm at 1200rpm. The Ford 7810 Gen 3 stock tractor was built from 1988 until 1991 in Basildon, Great Britain. Ford also have built a limited jubilee version of the silver-gray 7810 Ford tractor because in 1989 the Ford factory in Basildon existed for 25 years. The company has produced 50 silver gray 7810. 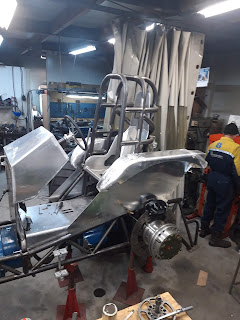 The new sheet metal fenders are homemade of aluminum sheet metal.
The Silver Bullet Team also purchased a set of new polished aluminum rims with new uncut 24.5x32 Firestone Puller 2000HP tires for the new project. With the new Puller 2000 tires, the tractor will have much more traction compared to the old Puller tires which they have used on their tractors in the past. The new custom-built aluminum rims were also built by Henk Meilink and the new tires were bought from the John Deere Pulling Team in Thy, Denmark.
The new Silver Bullet component limited super stock will have a turbocharged inline 6 cylinder Ford Powerstar engine with 7.4l capacity on alcohol fuel. 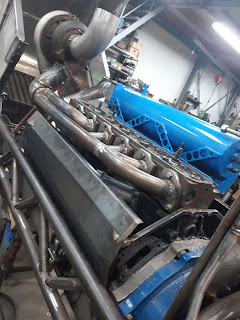 Back to the limited super stock engine. The 125hp from the stock tractor are far too less power for tractor pulling.
The power plant will receive a Ford cast iron stock engine block with a revised original Ford Powerstar crankshaft, new billet steel rods from Roland van Dongen with new homemade billet aluminum pistons, a new billet steel camshaft from Jan Burggraf (New Generation Pulling Team), a modified Ford cylinder head with bigger valves and better valve springs, an aluminum sheet metal valve cover, a homemade intake and exhaust manifold, a billet Holset HX 82 turbocharger with a 3.9 inch billet intake impeller wheel, a homemade alcohol fuel system with 2 Hilborn fuel pumps, an Aviaid 3 stage oil pump, a homemade aluminum oil pan, a homemade stainless steel fuel tank, an MSD 8 Plus ignition and a data logger from the Fiat Power Pulling Team.
The Silver Bullet Team will compete with their new Ford 7810 in the NTTO Dutch National Championship and on some tractor pulls outside of the Netherlands this year.
The maiden run of the new Silver Bullet component limited super stock is planned for the 2nd of May 2020 at the Dutch Championship pull in Oud-Gastel, the Netherlands. 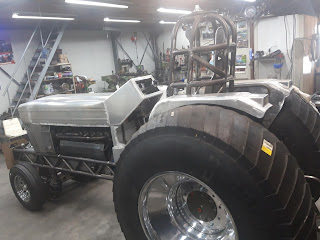 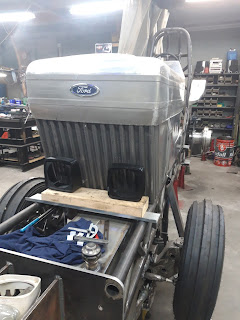 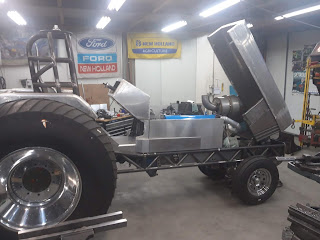 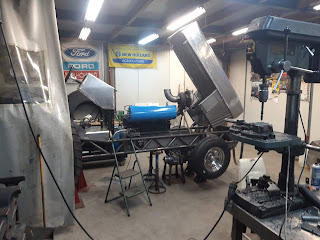 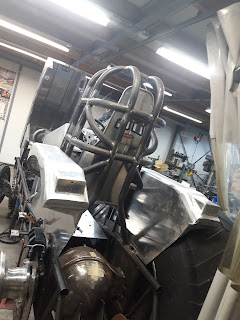