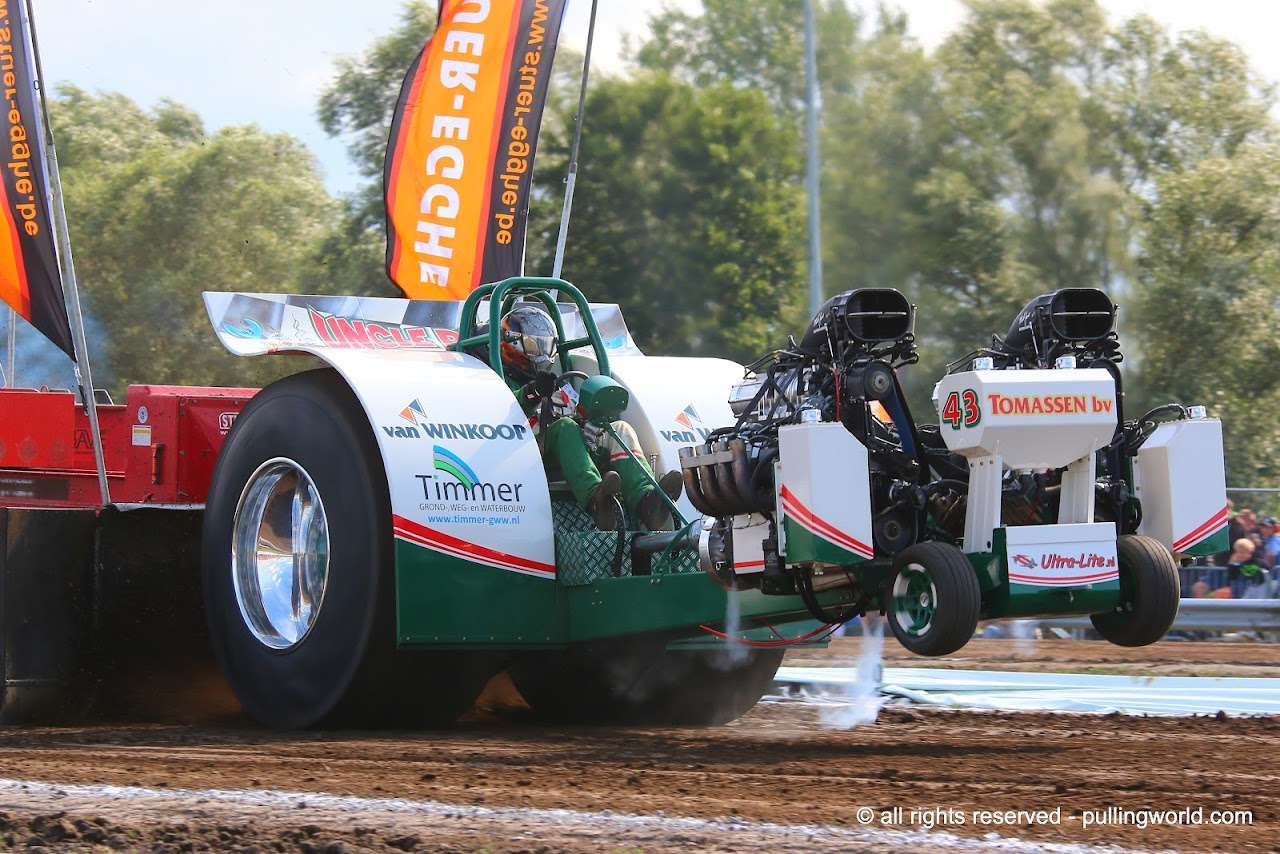 After a lots of work during the last spring and summer of 2019, the new Hemi powered 5500lbs / 2.5t light modified tractor called ''Uncle Duck'' of the Lucky Ducky Pulling Team around Couzijn van Heuvelen from Putten in the Netherlands is finally ready. The Dutch team worked for about 5 months very hard in their workshop to get their new toy ready for their home event, the Beachpull in Putten. The Lucky Ducky Pulling Team was founded by the former Bandit Pulling Team crew member and driver Couzijn van Heuvelen in 2016. After the old mini mod tractor called ''Little Bandit'' was sold, the guys from Putten started to build a new mini with an improved chrome-moly tube chassis and a Vampire gears planetaries rear axle. The DMPE 18-71 blown BAE V8 Hemi engine was taken over of the old tractor. With the new Lucky Ducky, they had a great 2017 season. 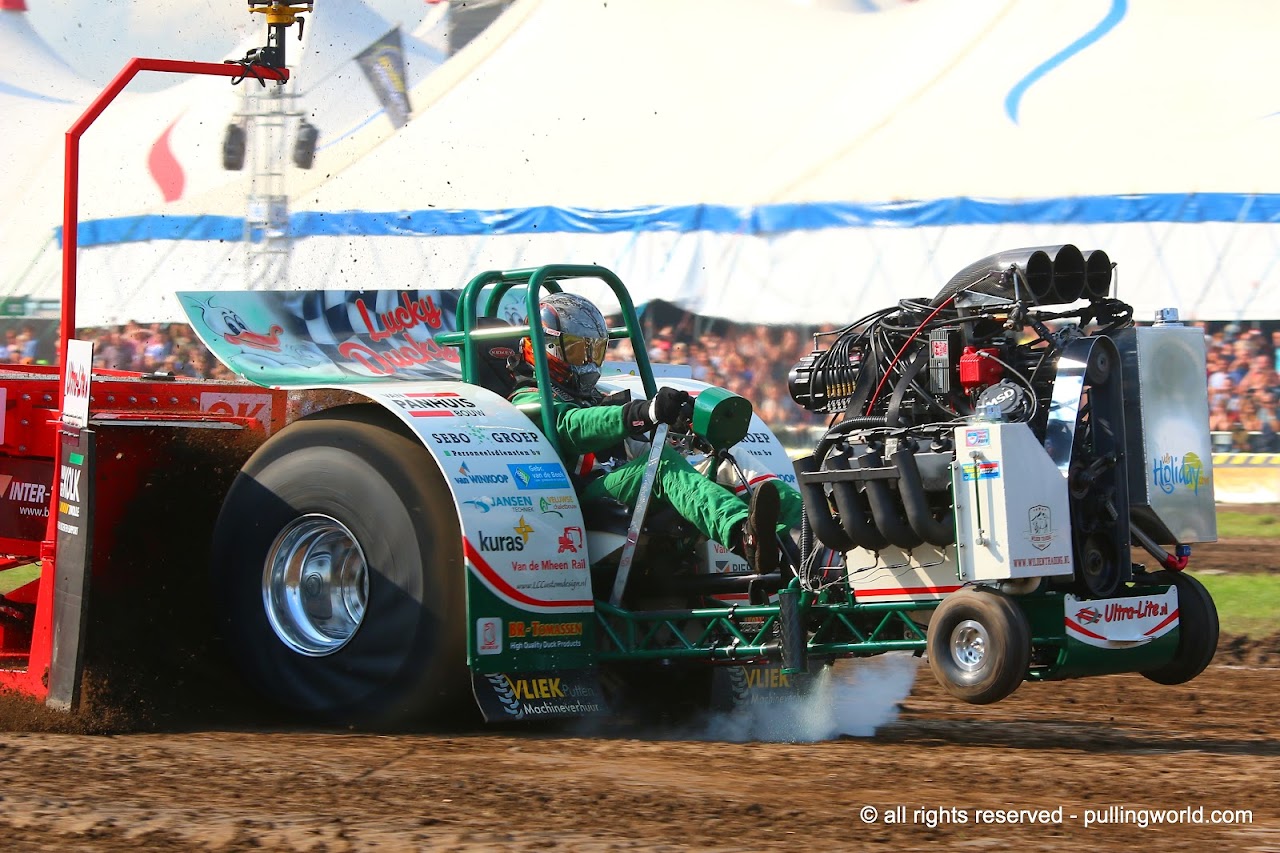 Driver Couzijn won the Dutch Championship opener in Stroe and finished with some solid results in runner up position in the Dutch Championship point standings. Very successful too was the 2017 Euro Cup season for them. With a win in Lidköping, Sweden and 2 further runner up places in Brande, Denmark and Putten, the Netherlands they finished in runner up positions in the 2017 Euro Cup point standings, a single point behind The Riddle Pulling Team from the Netherlands. 2018 was much tougher for them compared to 2017. No win but 3 podium finishes in the Netherlands and 3 podium placements in the Euro Cup. That meant a 5th place in the Dutch Championship and a 3rd place in the Euro Cup points at the end of the season. During the 2018 season, the Lucky Ducky Pulling Team decided to make the step into the 2.5t / 5500lbs light modified class this season. After 2 successful seasons, the Dutch team got the possibility to build a completely new tractor for the light mod class. The rumors about a new light mod project went around since fall 2018, in March 2019 the guys from Putten officially announced on their Facebook page to build a new machine for the light modified class. 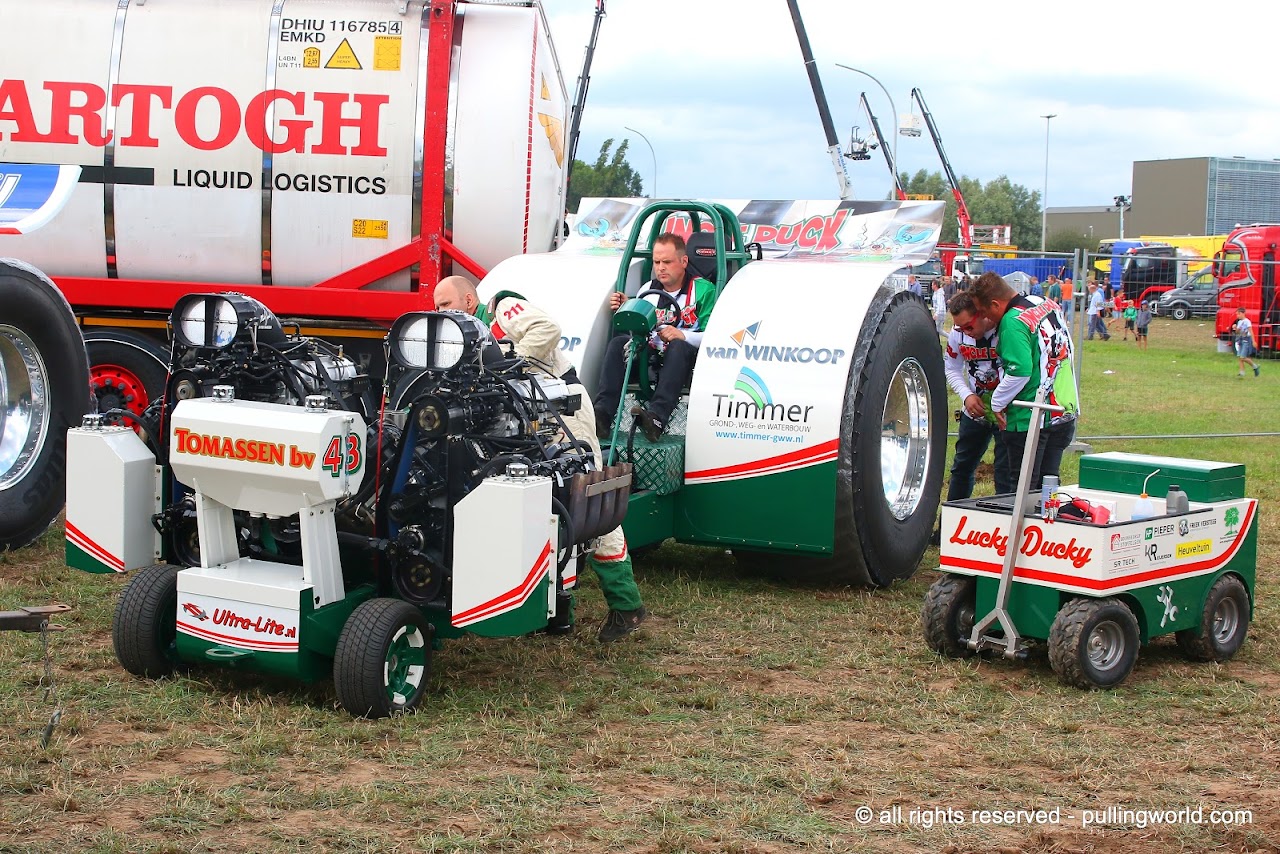 The new light modified machine got a new Domex wedge frame with a new chrome-moly roll cage, a rack, and pinion steering, a machined Rockwell rear axle housing with a newly built drawbar, homemade wheelie bars, and a new Kirkey Racing driver seat.
In the winter of 2018, the Lucky Ducky Team together with Berrie Boer of the Screamin' Bobcat Pulling Team started to planning the new tractor on the computer. The whole light mod machine was constructed on CAD, which made the later building process of the tractor much easier for the team.
All the sheet metal parts for the Domex chassis were laser cut and bent by Tosec BV in Zwolle the Netherlands. 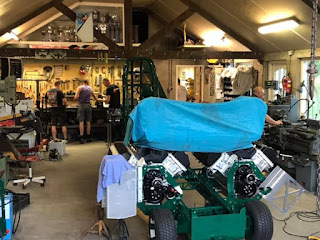 The Lucky Ducky Team purchased for their new Uncle Duck a set of new polished Northern Sheen aluminum rims with new Pro Puller 30.5-32 tires to have a good grip on the Dutch and European Pulling tracks. 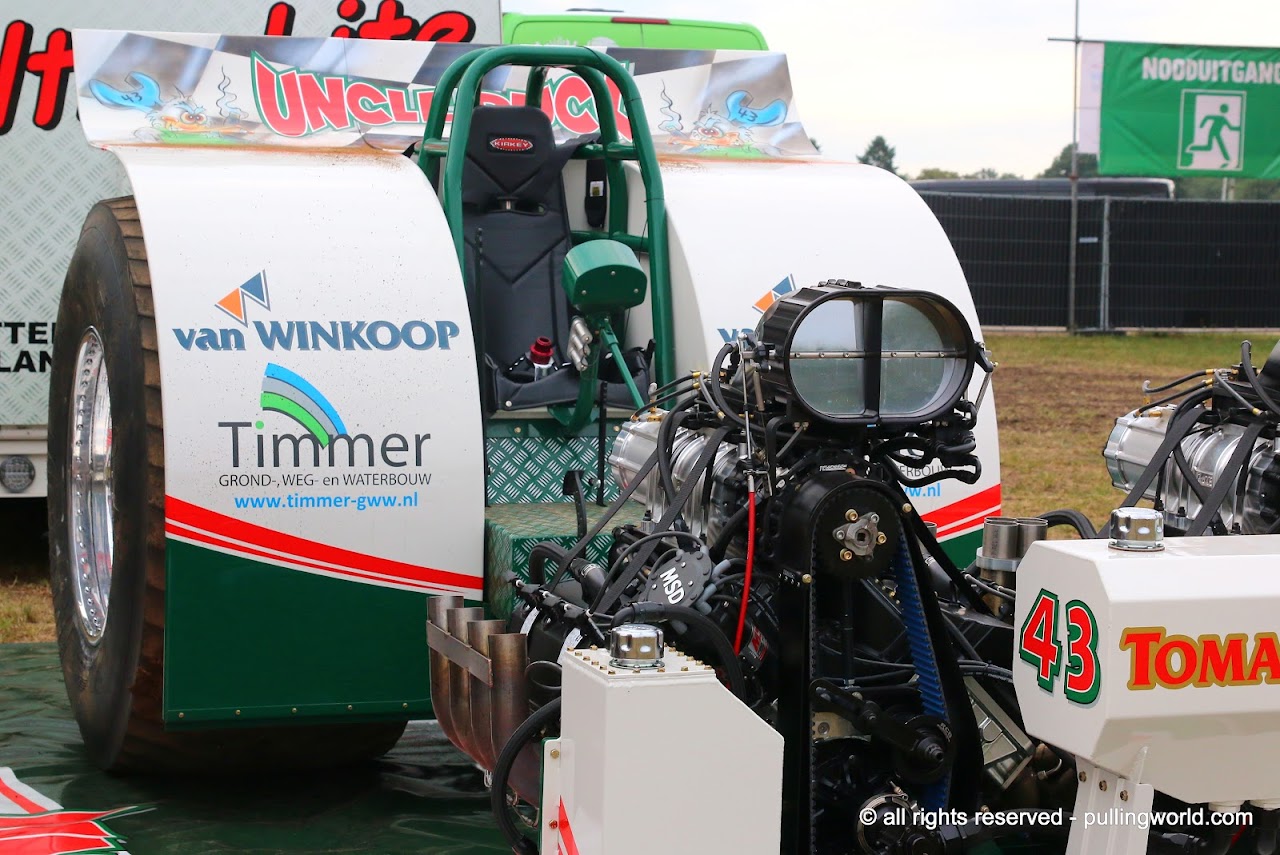 The Rockwell rear end received a billet aluminum Humpco center section with a billet aluminum Humpco differential, a Rockwell ring and pinion gear, custom built half shafts, billet aluminum planetaries carrier housing with new custom-built CAT 966 planetaries and new Engler & Machine billet aluminum brake calipers with new laser cut brake rotors. The new custom built CAT planetaries were built by Bennie Vreeman of Vampire Gears from Neede, the Netherlands.
The new fenders for the new project were made off carbon fiber and are very light compared to aluminum or steel sheet metal fenders. The fenders were built by the Rocket Science Pulling Team from Weert in the Netherlands. The crossbox for the new tractor was purchased from the Screamin' Bobcat Pulling Team in Ijsselmuiden, the Netherlands. Because of their new unlimited project with 4 Hemi engines, they couldn't use the crossbox for the new machine anymore. So, the Boer Family made an offer to the team to purchase the box for a good price. The crossbox was used before on the light mod and mod machine called "Double Screamin" and was constructed and build during the winter of 2014 / 2015. Bennie Vreeman of Vampire Gears did all the calculations and Berrie Boer of the Screamin' Bobcat Team developed the aluminum housing for that box. After that, the company Breman Machinery from Kampen machined the aluminum housing on a CNC-milling machine and Vampire Gears did all the gears and shafts for the crossbox. 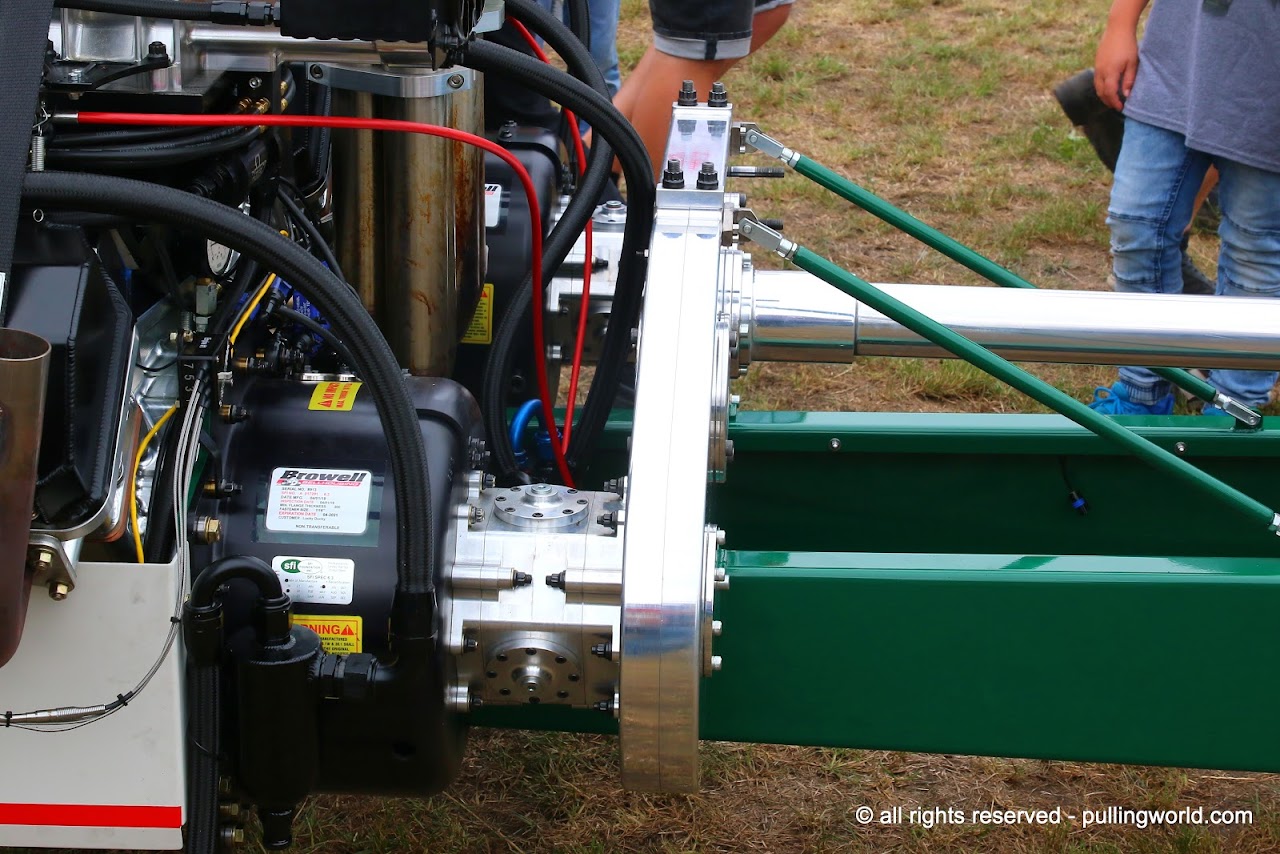 Also almost completely new is the driveline. The driveline will have a Humpco reverser, a used crossbox from the Screamin' Bobcat Pulling Team with 2 new Vampire Gears gearboxes and a new custom-built driveshaft between the crossbox and the reverser by Vampire Gears. The team will use for each engine a Crower centrifugal clutch with a Browell aluminum bell housing.
On the crossbox, they can switch every time on the events the gears, to change the ratio for the different conditions. The box isn't built only for 2 engines. They can put a dropbox on the top of the crossbox and then they can run with 3 engines. The little gearbox between the crossbox and clutch is for the rotation of the engines. With this little gearbox, they can run one engine clockwise and the other one counter-clockwise. With this setting, they can take the torque out of the chassis, which makes the tractor is more stable on the track and they can bring their power better to the ground. The same system worked very successfully so far on the light mod tractor called "Wicked Screamer" of the Screamin Bobcat Team in 2018 and 2019. 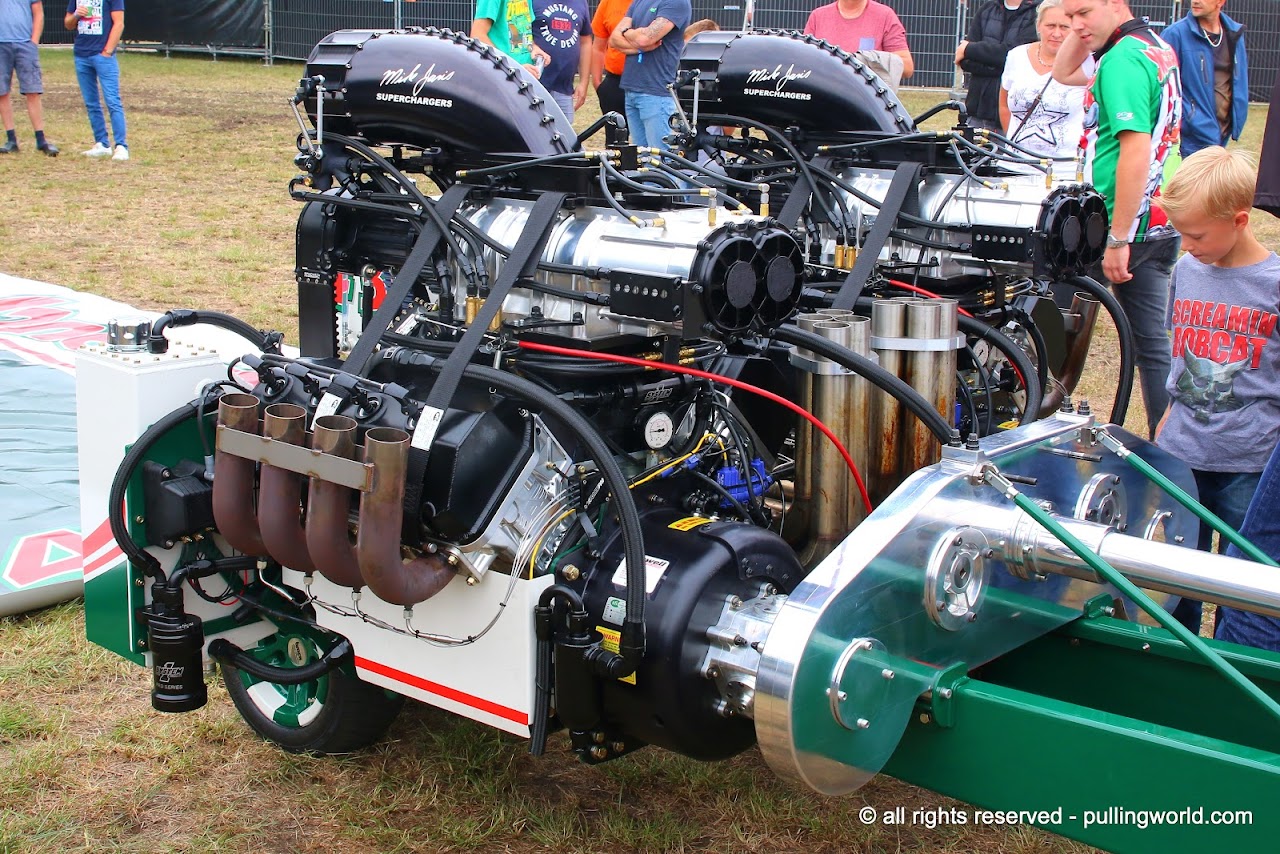 The new Uncle Duck is powered by 2 blown BAE V8 Hemi engines with a displacement of 526cui on methanol fuel.
The power plants have a BAE billet aluminum engine block with Darton sleeves, a billet Winberg steel crankshaft with billet aluminum rods and pistons, BAE Alcohol cylinder heads, Moroso aluminum valve covers, homemade stainless steel exhaust headers, a Mike Janis 14-71 blower with a Mike Janis billet aluminum injector scoop, a Waterman fuel pump, a homemade aluminum oil tank, a dry sump lubrication with a System 1 oil pump, an MSD 44 Pro Mag ignition and a Racepak data logger system from Post & Dros in Dronten the Netherlands. The fuel tank sits on the front end of the light mod and comes from the old Double Screamin' of the Boer family. The tractor is currently the only light modified tractor with a Mike Janis superchargers on it in Europe.

The name Mike Janis is currently maybe not so known in Europe but in his homeland the USA, he's a very known person, especially in the Drag Racing business. Mike is the owner of Mike Janis Racing and builds custom-built superchargers and injector scoops for V8 racing engines in the Drag Racing and Tractor Pulling sport. He's also a very successful Drag Racing competitor in the pro modified division in the USA. Mike achieved 3 NHRA pro modified National titles in the past. He won his first title in 2001, his second in 2004 and his third and final title in 2018.
The team was ready with the tractor a few days before their home pull in Putten. After the machine was ready they decided to make a test pull before the main day Saturday in Putten. For the test pass, they also received help from Egbert Dros and Dick Koster of Post & Dros from Dronten in the Netherlands. They helped them to find the right settings for the new Racepak data logger system and the Mike Janis blown BAE Hemi engines. 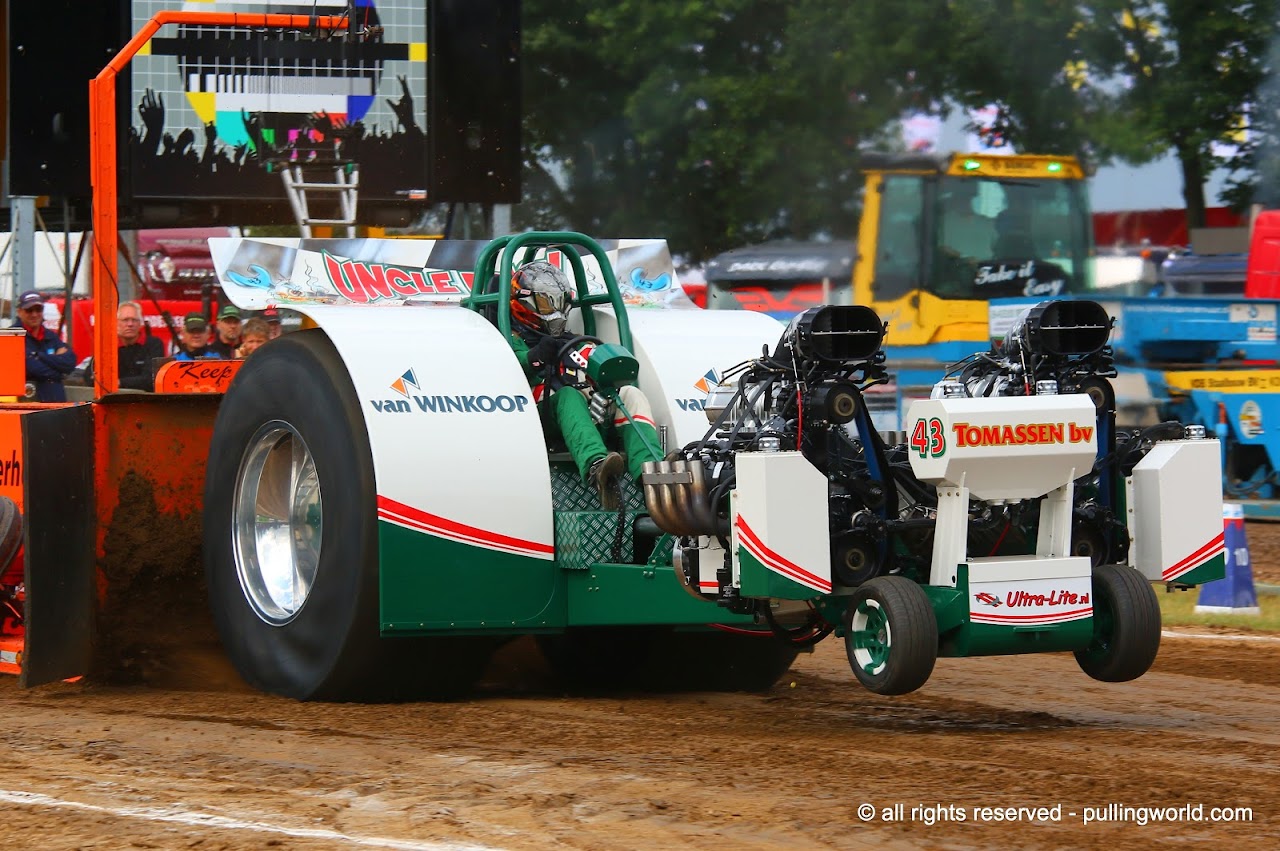 But the test pass wasn't very successful. Shortly after the start in front of the Keep Moving Orange sled, the whole tractor has shaken like a wet dog and driver Couzijn took the throttle away before something went seriously wrong. Back in the workshop, the team made some changes to the tractor and decided to switch the new Pro Puller tires against a set of used Firestone Puller 2000 HP. On Friday evening, the first day of the Beach Pull, they made another test pass in front of the Take It Easy sled. The setting of the sled was very light and driver Couzijn van Heuvelen made a nice Full Pull. The whole Team was happy so far with the run looked forward to the main day on Saturday. Saturday was pretty good for the guys. 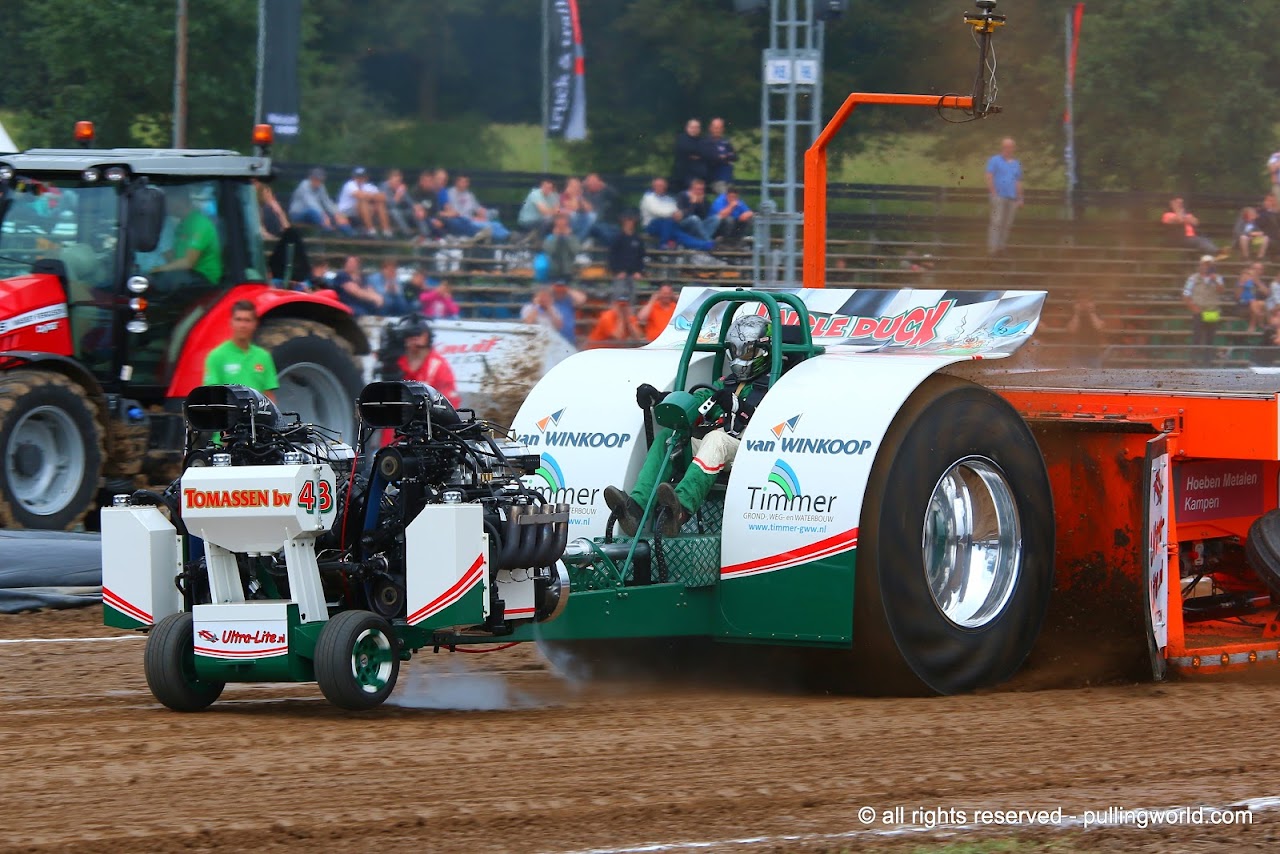 With 2 nice runs, they finished in a very good 3rd place behind Wicked Screamer from Ijsselmuiden in the Netherlands and Green Monster 5 Mitas Edition from Füchtorf in Germany. The Lucky Ducky Team has never thought to finish under the top 3 at their first competition (Euro Cup) with the new machine. The rest of the 2019 season was a learning year for the whole team to understand how the new light modified worked with the new engines and the new Pro Puller tires on the different track conditions in the Netherlands. One is sure if the tractor running well, the team around Couzijn van Heuvelen will have good chances to fight for the victories and the Championships in the future.
The Lucky Ducky Pulling Team will compete with their new Uncle Duck in the Dutch Grand National Championship and in the Euro Cup this year. 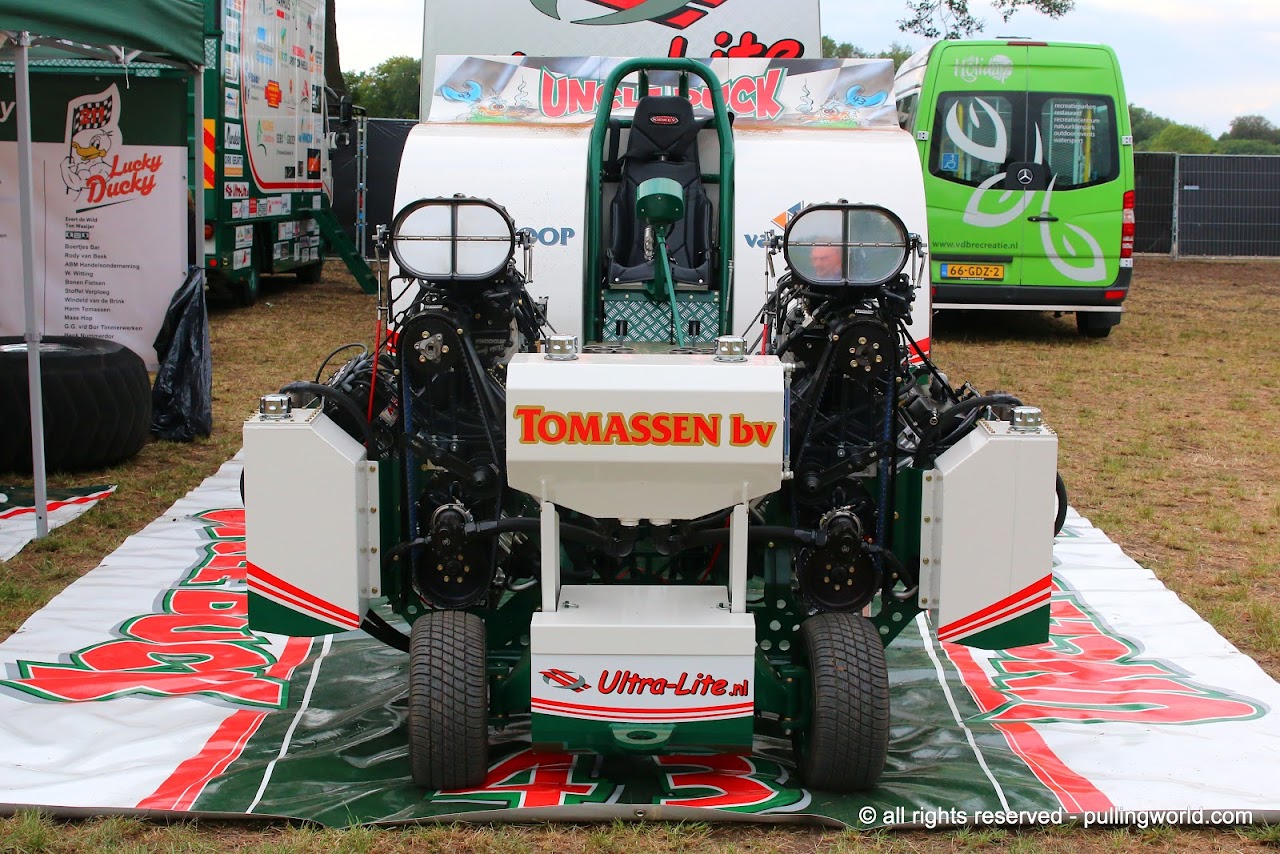 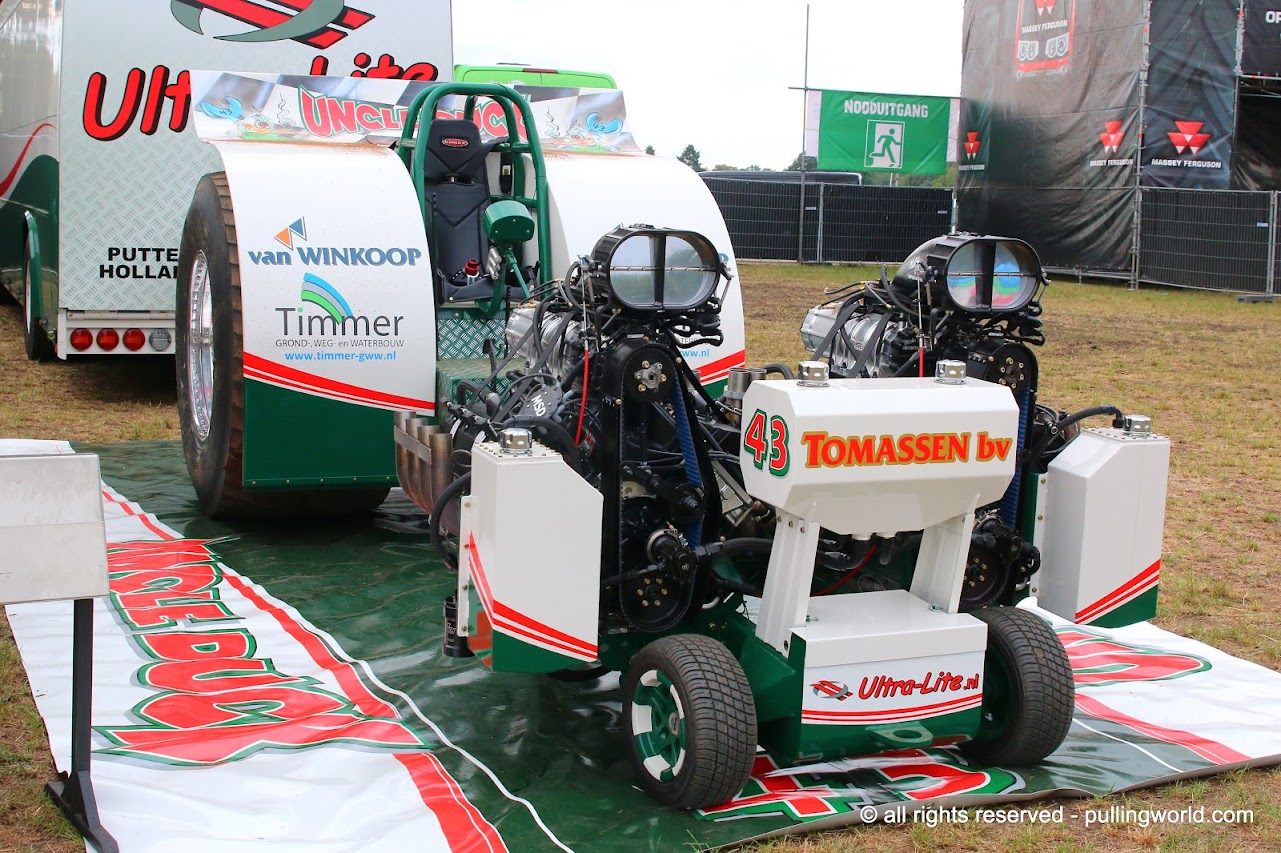 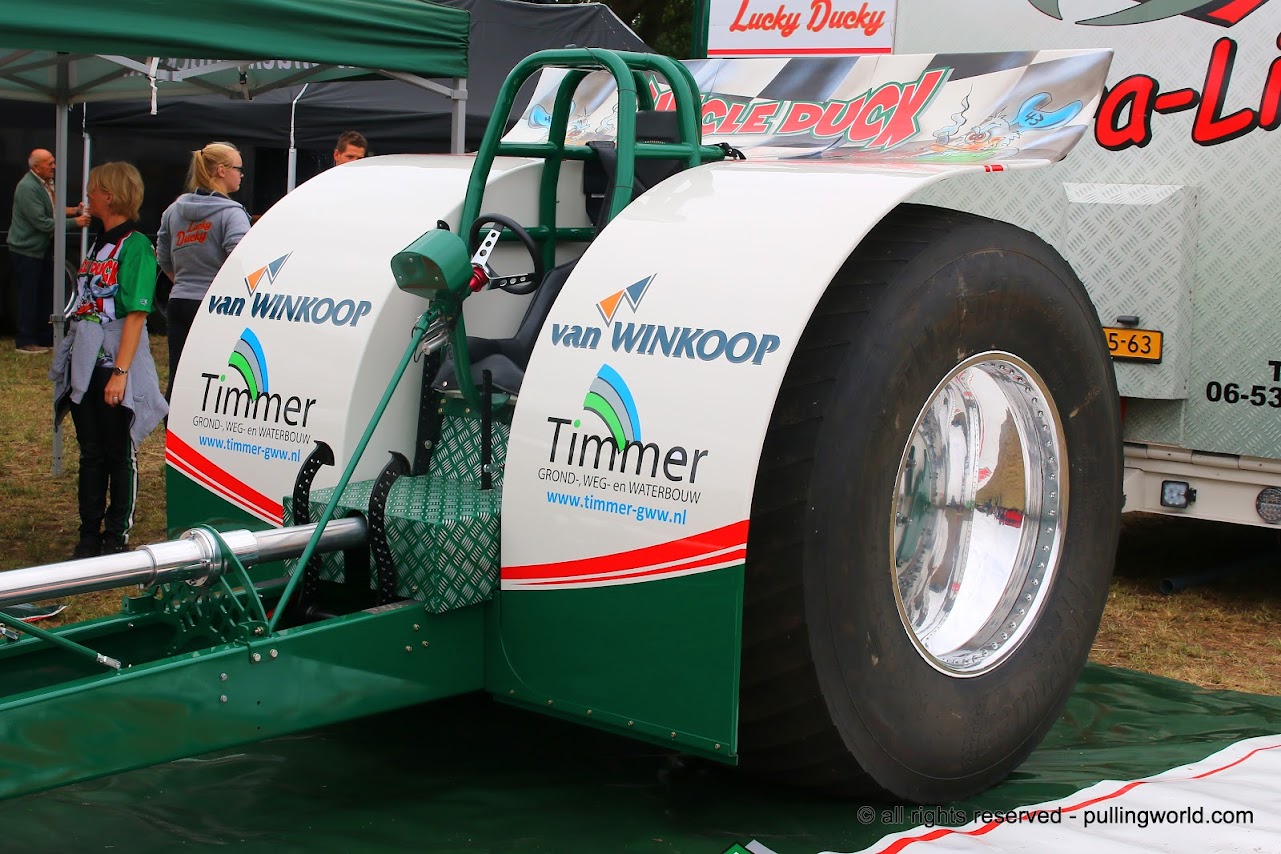 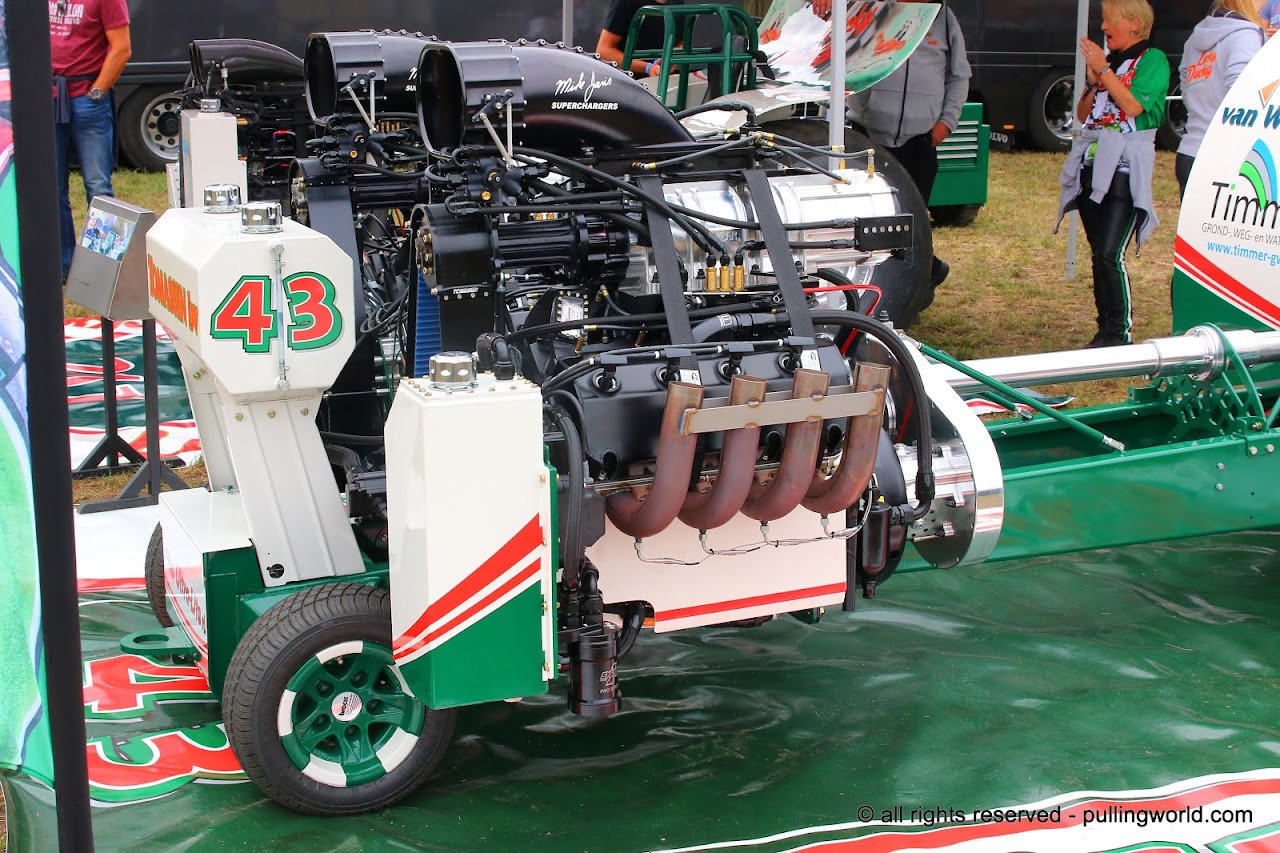 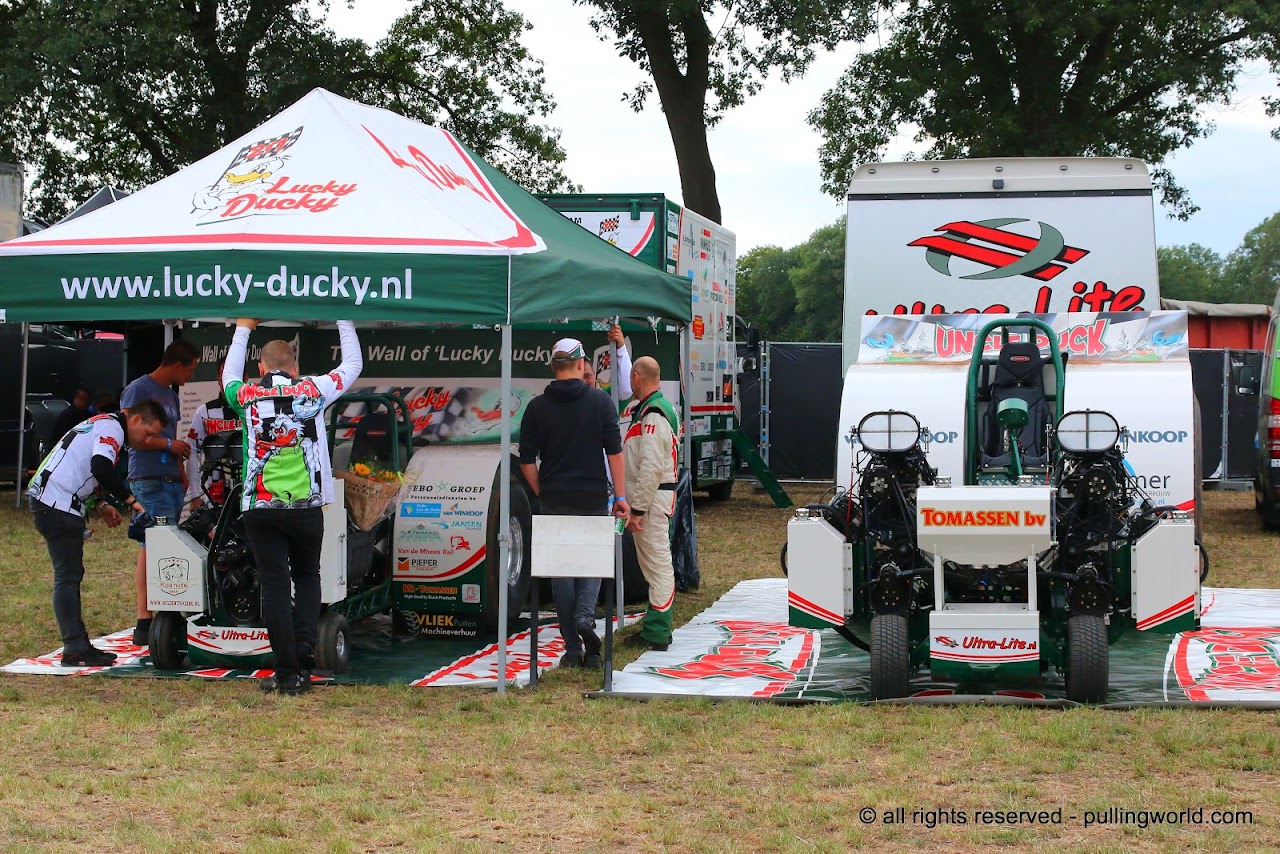