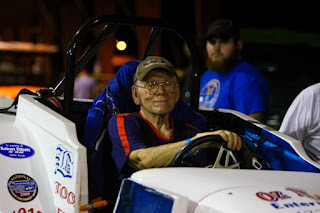 From NTPA:
WPI/NTPA is saddened to learn of the death on Sunday, July 19 of Clarence Franklin "Oz" Hay, 83, of Pelham, Georgia, formerly of Sikeston, Missouri. Mr. Hay was a regular competitor in the Two-Wheel-Drive division within the Outlaw Truck and Tractor Pullers and Mid-South Tractor Pullers Associations and pulled the "Nitro-Holic" Chevrolet roadster TWD for three seasons on the NTPA Grand National circuit.
After his employment as a machinist for Sems-Camcar in Rockford, Illinois, Mr. Hay became the proprietor of Oz Hay Enterprises, a fabrication and mechanical business in Sikeston. His first motorsport love was street racing, but after several tickets he took his pursuit of speed off the road and onto the dragstrip with a Buick V8-powered Ford. He dropped a series of supercharged Buicks into a rail frame dragster over the next several decades before scaling back his racing operations. Among his accomplishments were winning the International Hot Rod Association's Crew Chief of the Year Award in 1977 and becoming the second person to officially exceed 200 miles per hour while briefly holding a world speed record. 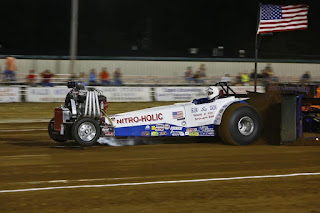 Mr. Hay turned his attention to truck pulling in 1995 with a 1965 Chevrolet pickup called "Nitro-Holic," a name it inherited from his final few racecars. A naturally aspirated S-10 came along in 2002 for MSPA competition, but that engine was replaced with a supercharged plant in 2004. The roadster edition of "Nitro-Holic" was built on the frame of the former "Jack Daniels" truck of Bill Humphrey and promptly won the 2005 Mid-South title.
Mr. Hay then claimed OTTPA TWD championships in 2006 and 2007 with a win apiece in each of those seasons. He pulled with the Ken-Ten and Illinois Tractor Pullers organizations for the next few seasons before joining the NTPA GN circuit from 2011 through 2013. His best year with the Association resulted in a 10th-place finish in the 2011 standings. 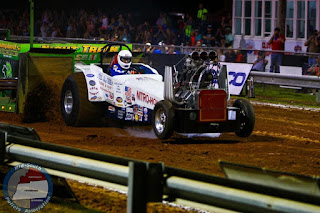 Mr. Hay was inducted into the Mid-South Pullers' Hall of Fame in 2014. But that was by no means his swan song, as he won that association's TWD titles two more times in 2015 and 2016.
Surviving are Elaine, Mr. Hay's wife of 64 years; one son, Dan (Sheri) Hay; one daughter, Sherry (Tim) McCoy; his brother, Bill (Carol) Hay; one nephew, Daryl (Shari) Hay; his grandchildren, Mallory (Wesley) Hay, Zakk (Deanna) Hay, Josh (Lillian) McCoy, and Anthony (Heather) McCoy; and his great-grandchildren Jameson, Hannah, JR, Ryker, Landyn, Piper, and Macaila.
Please keep Elaine and the entire Hay family in your prayers during their time of grief.
Gepostet von Kevin bei Friday, July 24, 2020