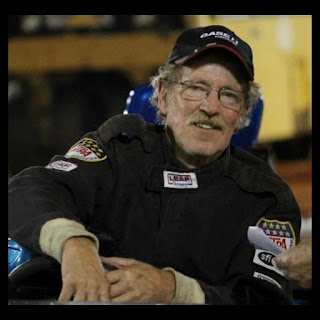 At the beginning of this week, we have reported on the pullingworld website about the inductee of two-wheel drive competitor Randy Petro into the NTPA Hall of Fame. Only a day later came the saddening news from the Petro family about the death of Randy. The former NTPA GN champion was diagnosed with lung cancer in early December of 2019. But, unfortunately, he should never recover from this bad illness. With Randy Petro the tractor pulling sport has lost a legend and a great competitor. With certainty, the competitors, organizers, and fans of the pulling sport will definitely sorely miss him in the future. Randy will always in the mind of the people and will never be forgotten.
We wish the whole family and team a lot of strength to cope with this terrible loss.

Here is a nice article about the career of Randy Petro from the NTPA: 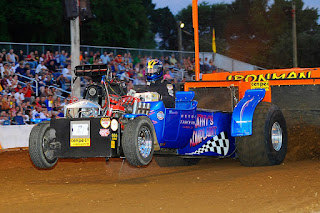 The WPI/NTPA family is heartbroken in announcing the passing on Wednesday, July 22 of Randy Petro, 62, of Camden, Ohio after a months-long battle with cancer. Mr. Petro was a five-time Grand National champion in the Two Wheel Drive division and the patriarch of the Petro Motorsports Team that won 10 consecutive premier-level titles from 2009 through 2018.
Visitation for Mr. Petro's family and friends is scheduled for Sunday, July 26 from 3 to 8 p.m. at Bales Funeral Home, 249 North Main Street in Camden, Ohio 45311. After a viewing from 10 to 11 a.m. on Monday, his funeral will be held at Fairhaven Community Church, 6585 Israel Somers Road in Camden. 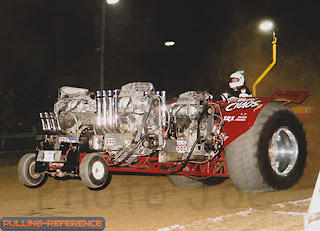 The owner of Petro Trucking in Camden, Mr. Petro began his pulling career in stock Four Wheel Drive in the late 1970s, and a foray into sanctioned pulling in 1984 in the supercharged division with "Milsap Magic" ended after just one year. He returned to Regional National and Ohio State Tractor Pullers Association competition in 1990 with his first Two Wheel Drive---the "Buckeye Hauler" Ford Ranger---and won a state championship in his rookie season. He added "Challenger" to double the size of the nascent Petro Trucking stable for 1991, and it took sixth place behind "Hauler"'s third in the Pro National standings.
For the very next campaign, he exchanged the pickup look of "Challenger" for the iconic T-bucket he christened "Kathy's Komplaint." It was an alliterative term of endearment toward his devoted wife, who initially feared for Mr. Petro's safety, exposed as he was in the open cab of the wheelstander. Mr. Petro would proceed to pilot various editions of that truck for the next 28 years. 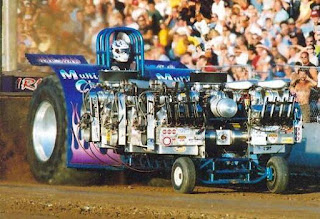 The "Hauler"/"Komplaint" tandem was a winner from the beginning, as Mr. Petro was both champion and runner-up in Region II in 1992 with nine combined PN/RN victories and a sweep at Ionia. A first title for "KK" and fifth-place finish by "BH" came on the PN circuit in 1993 before a move to the Grand National circuit for 1994 put "KK" in third at season's end.
In 1995, Mr. Petro was the Grand National champion with "Kathy's Komplaint" as he debuted "Buckeye Hauler: Next Generation" in sixth. The pair of roadsters were fourth and sixth in 1996 as Randy undertook yet another challenge: The multi-engine Modified division. There, he took second in both the 7,200-lb. Limited Mod and 7,600-lb. Unlimited with the four- to five-engine "Multi Chaos," winning once at each weight. With "Chaos" second in MOD and fourth in UNL, the trucks likewise moved up to second and fourth in 1997. 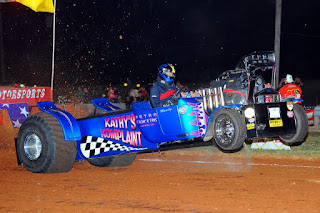 At that point, son Jessie was ready for a ride and took the reins of "Buckeye Hauler," promptly finishing sixth and being voted Co-Rookie of the Year. The younger Petro would begin a string of seven consecutive top-10 finishes in the GN TWD standings while his dad maintained his own top-10 streak with both "KK" in TWD---winning it all a second time in 2001---and "Multi Chaos" in at least one of MOD or UNL through 2003.
A 2004 Bowling Green ring turned out to be Mr. Petro's last hurrah in the Unlimited division, as Petro Motorsports downsized to just single-engine vehicles beginning in 2005. But over time, they attained quite a collection of them. "2 Timin'" joined the squad in 2007, and after a three-year stretch running Region II that resulted in titles for Randy and "Komplaint" in 2007 and 2008, the Ford Ranger won Jessie his first GN title in 2009. Meanwhile, Randy was voted GN Rookie of the Year thanks to his entry into yet another division with a Modified Mini---eventually named "Freak on a Leash"---that made effective use of the team's spare engine. 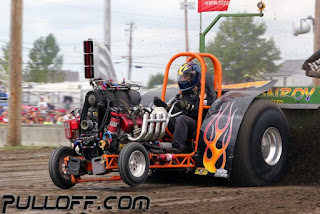 The father countered the son's GN title with two more of his own in 2010 and 2011. But after it added a fourth truck, informally called the "Penguin" for its monochromatic paint scheme, the team would soon add a third member, nephew Joey Frasur, to drive the renamed "Runnin' Block" beginning in 2013. Frasur's success was immediate, as he converted his opportunity into the team's third Rookie of the Year campaign. And Jessie? In 2015, he added a fifth truck, "P5," but mostly added GN crowns---six of them---to extend Petro Motorsports' unprecedented streak to nine entering the 2018
A new "Kathy's Komplaint" debuted in 2016, but the old chassis, rebadged "Vintage KK," continued its title-claiming ways in Region II for three additional seasons and matched its successor as Mr. Petro was twice victorious at the Enderle Pull-Off. The next season, "Kathy's" two "Komplaint"s combined to win nine of the Western subregion's 14 hooks. And in 2018, competing everywhere it could across several national circuits, Petro Motorsports deployed seven vehicles and four drivers: "Buckeye Hauler, "Kathy's Komplaint," "2 Timin'," "Runnin' Block," "Vintage Kathy's Komplaint," "P5," and "2 Timin' 2," variously piloted by Randy, Jessie, Joey, and Chad Mayhill. 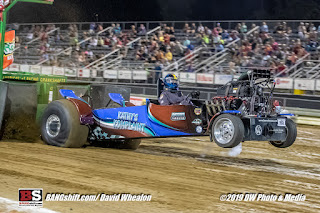 Was the chaos of a multi-truck shop and multi-hauler driveway a distraction? Hardly. It was all kept in order by Kathy, 2017's Crew Chief of the Year. In fact, the Petro conveyor belt turned out a workmanlike 10th straight GN title with Randy, after winning only the 45-truck Saturday night class in Tomah, unseating Jessie atop the standings and claiming his second BG ring.
2019 proved to be a difficult season, as the elder slipped to third with "Kathy's Komplaint" and neither "Runnin' Block" nor "Buckeye Hauler" found consistency. And the offseason took a tragic turn, as an ailing Randy was diagnosed with lung cancer that rapidly metastasized. Piloting "KK" in Randy's place at the legendary National Farm Machinery Show Championship Tractor Pull in Louisville, Kentucky, Jessie dominated the proceedings, first with a Friday night heat win and then with an emotional Saturday night Finals victory. 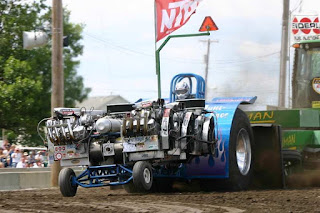 Mr. Petro's name will be well remembered by even casual observers as that of a fierce competitor in several supercharged divisions. But he was most respected by his fellow pullers and students of the game for his team's meticulous preparation and his own diligent analysis of each contest's pulling surface to maximize his opportunity to contend. Indeed, it can rightfully be said that Randy Petro did most of his winning before the starter was engaged.
WPI/NTPA expresses our sincere condolences to Kathy, Jessie and Jessica, Joey, and the entire Petro family and team who were on hand on Friday, July 10 to see Randy take his place among the greats of all time in the Pulling Hall of Fame. Mr. Petro will be deeply missed by the patrons, participants, and presenters of a grateful motorsport. 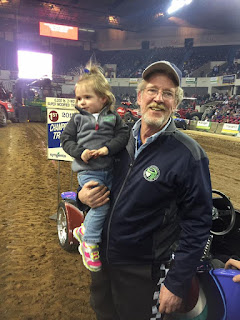