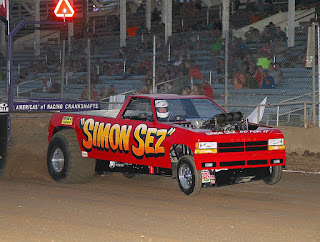 From NTPA:
The WPI/NTPA office regrets to report the passing on Sunday, July 19 of Roger Simon, 67, of Farley, Iowa. Mr. Simon was a three-time Grand National champion in the Two-Wheel-Drive Truck division with his "Simon Sez Dodge," and he was the father of Two Wheel Drive and Light Unlimited competitors R.J. and Brandon Simon.
Mr. Simon was the President and CEO of Simon Trucking, the family-owned business begun in 1946 that had grown to serve clients throughout the contiguous United States and Canada with a fleet numbering over 100 trucks.
He broke into NTPA pulling in 1983 in the Four-Wheel-Drive Truck division and announced his presence on the national scene with victories at 5,800 lbs. in Tomah, Wisconsin and at 6,200 lbs. in Bowling Green, Ohio. His 1980 Chevrolet finished tied for sixth in the 58 and tied for fifth in the 62 in that season's Grand National standings. 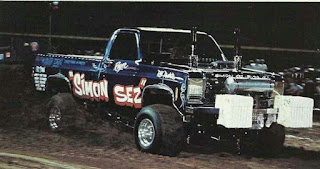 He continued solely in the FWD division with teammate and crew chief Steve Olsen (Showtime) for a couple more seasons before adding the Trans Am-bodied "Stampede" Two Wheel Drive to the Simon Sez Team stable. Success again followed as he claimed the win at Lincoln, Nebraska's State Fair to close out the GN campaign. Having renamed the funny car "Simon Sez" for 1987, Mr. Simon finished first at that year's Tulsa GN Finals.
The "Simon Sez Dodge" Dakota came on board in 1988 and became the team's flagship. Between three runner-up GN finishes from 1990 through 1992 and three more from 1994 through 1996, the venerable red-and-yellow truck won Mr. Simon his first premier-level TWD title in 1993. He claimed the crown again in 1997 (in a most-wins tiebreaker over Randy Petro) and in 1998. For the last two, "SS Dodge" shared a hauler with the newcomer "Simon Sez Chevy," which finished third in the '98 standings. Mr. Simon proceeded to clinch four more national TWD titles with the American Tractor Pullers Association---three with "Dodge," one with "Chevy"---from 1999 through 2002 to give him a total of six titles and six runner-up finishes in 12 years across the two national organizations. 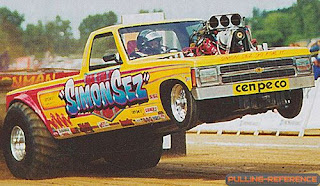 Mr. Simon competed only sporadically over most of the next two decades as the pulling careers of his sons were taking off, first in Two Wheel Drive and later in the nascent Light Unlimited division, where the Simon Sez Team has also captured three titles to date. But he returned to NTPA GN competition in force in 2019, and with the help of his sons put two trucks in the top six in year-end standings and qualified "Simon Sez Chevy" for the Enderle Pull-Off.
Private visitation for Mr. Simon's family and friends will be held on Friday, July 24 at Reiff Funeral Home, 330 First Avenue NW, Farley, Iowa 52046. Memorials may be sent to Reiff Funeral Home, Attention: Roger Simon Family at P.O. Box #99, Farley, Iowa, 52046. A Private Mass of Christian burial will be held on Saturday at St. Joseph’s Catholic Church, 202 Second Avenue SE, Farley. A public celebration of life will be held following the burial at noon at Simon’s Trucking at 920 Simon Drive in Farley.
In addition to R.J. and Brandon, we ask that you keep the entire Simon family close in your thoughts as they mourn their loss.