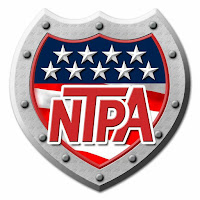 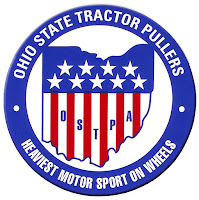 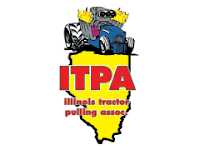 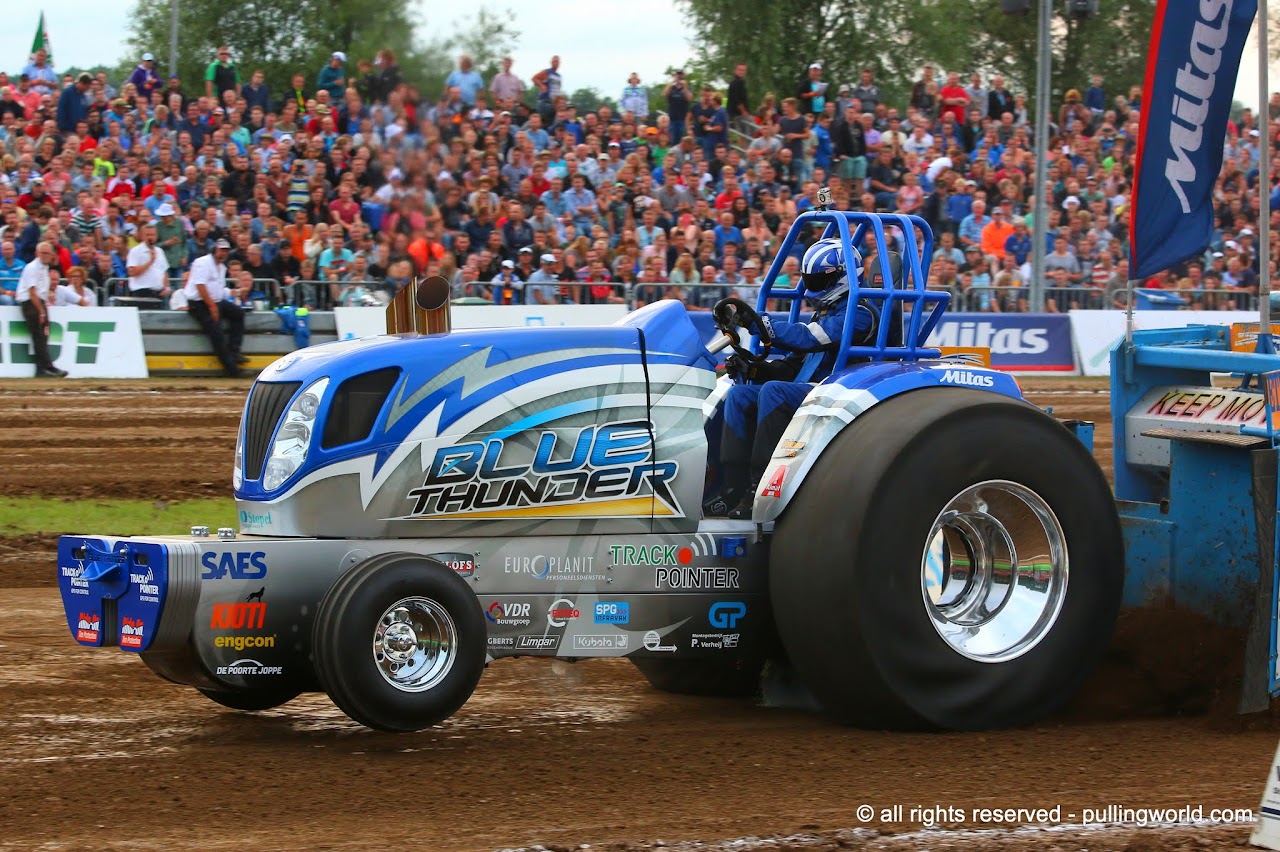 Last week, the Blue Thunder Pulling Team around Derk Willems and Jeroen Jacobs from Tonden in the Netherlands has announced on their Facebook to stop with the tractor pulling sport after more than 13 years. The Dutch team which owns the New Holland T7 270 component super stock tractor called ''Trackpointer Blue Thunder'' have decided to stop with tractor pulling because of their current low available budget. The currently available budget makes it not possible anymore to compete on the top level with the New Holland in the 3.5t / 7700lbs super stock class.
The Blue Thunder Team was founded by Jeroen Jacobs and Derk Willems at the end of 2006. The guys built a New Holland / Ford 8970 for the 4.5t/9920lbs super sport/farm stock class during the winter of 2006 / 2007. 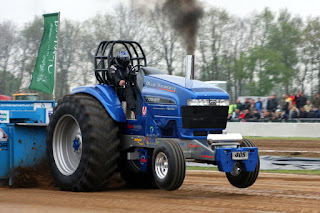 The nice super sport/farm stock tractor was powered by an 8.8l 6 cylinder Ford Powerstar engine with a Holset turbocharger on diesel fuel. Derk and Jeroen competed with their ride pretty successful in the Dutch Championship from 2007 until 2014. In those 7 years in the 4.5t supersport/farm stock class, they achieved many wins and finished in runner up position of the Dutch Championship in 2008 and 2009. During the 2014 season, the Blue Thunder Team sold the Ford / New Holland 8970 to Martin and Botvid Göransson from Sweden. The tractor running since 2015 in the Swedish Championship and in the Euro Challenge under the name Blue Wiking. 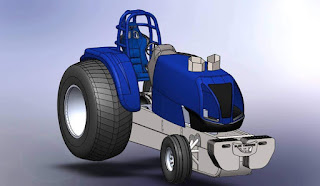 After the super sport machine was sold, the guys from Tonden had new plans on the table to built a new pulling tractor. After those 7 years in the 4.5t/9920lbs super sport class, the Blue Thunder Team decided to try something different new and built a completely new limited super stock tractor on component base. For that new project, they received help from the Screamin' Bobcat Team from Ijsselmuiden in the Netherlands and from Willem Veldhuizen of Veldhuizen Special Products (VSP) from Loosdrecht in the Netherlands. Berrie Boer of the Screamin' Bobcat Team developed them the whole chassis on a CAD program on the computer and Willem Veldhuizen helped them with the parts and the fuel system for the engine. 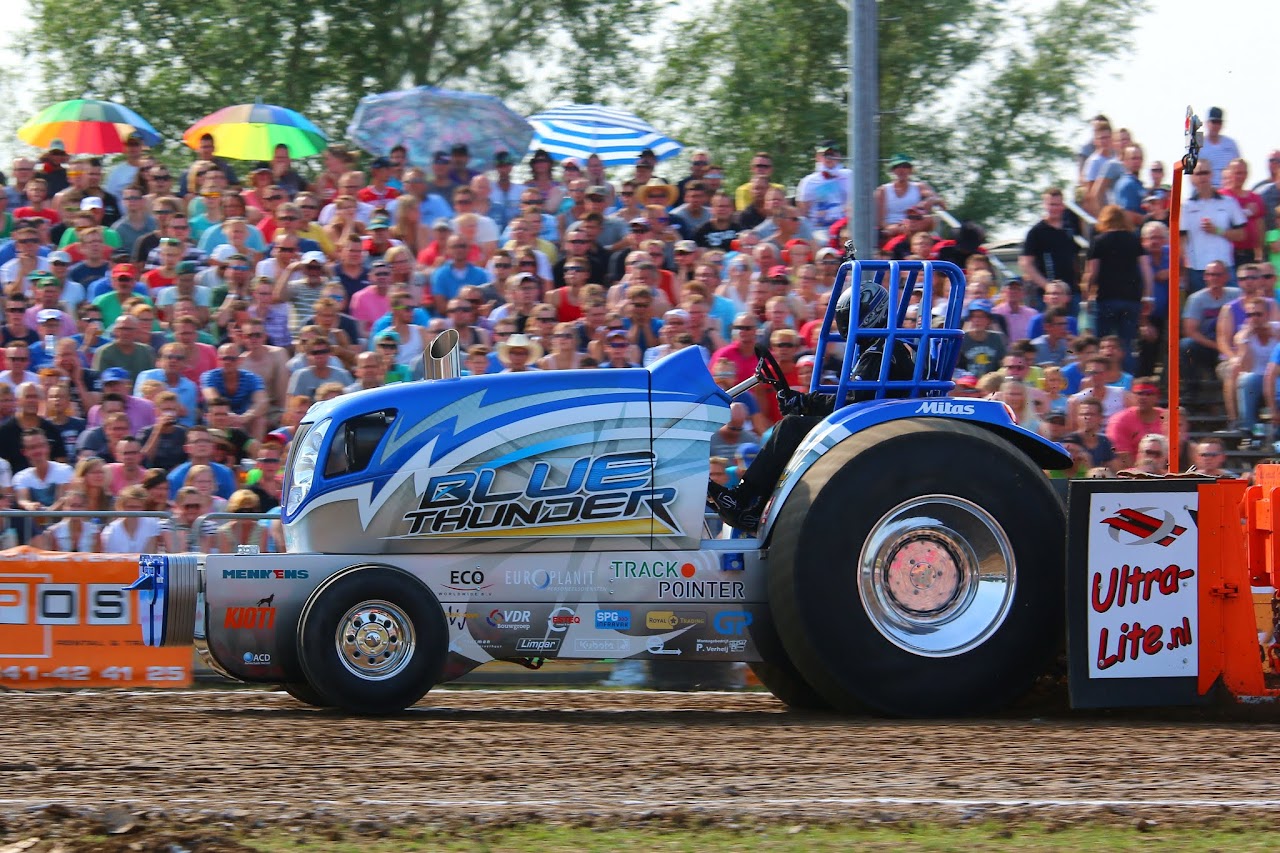 The tractor received a Domex wedge frame with a homemade 3 bar chrome-moly roll cage, a hydraulic steering, a new New Holland T7 270 hood, and a Rockwell rear end with Humpco parts. After the tractor was almost finished, the limited super stock machine received some nice vinyl graphics on the hood. The vinyl graphics in that time were done by Marco Mathijssen of M2iD from Roosendaal in the Netherlands. For the limited super stock division the machine was powered by a turbocharged 6 cylinder Ford Powerstar with a displacement of 7.6l on alcohol fuel.
The new Trackpointer Blue Thunder was ready in the middle of July 2015 and had its maiden run at the Beachpull in Putten, the Netherlands. It was a great first pass in front of the sled and driver Jeroen Jacobs made a nice Full Pull in front of the crowd. But they couldn't return for the finals because of a broken oil pump. That nice Full Pull was enough for a nice 2nd place at the first outing for the brand new New Holland T7. 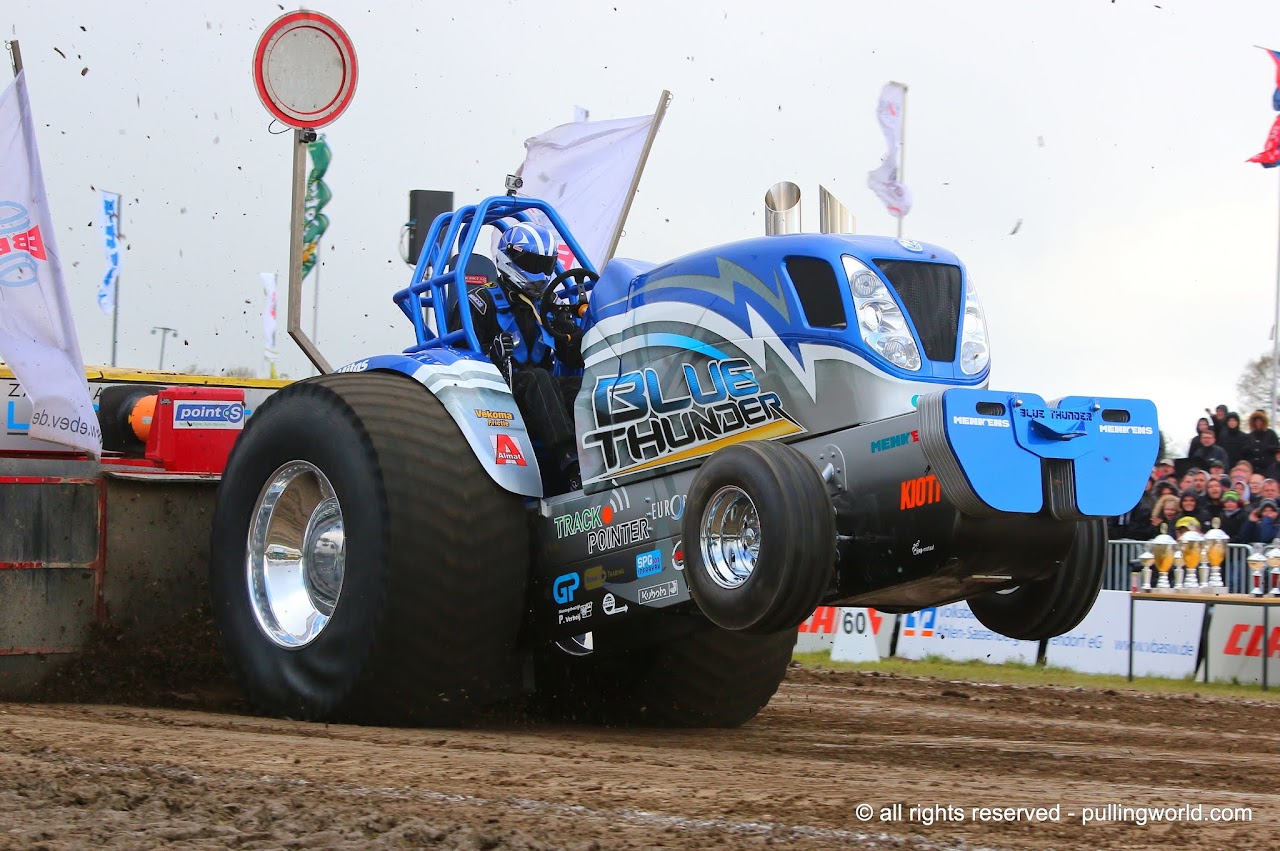 After Putten, the Blue Thunder Team dominated the rest of the season in the Dutch Championship of the limited super stock class. They won in convincing form the events in Aagtekerke, Lochem and Alphen. But their most important victory was the win at their home pull in Lochem in front of their fans and sponsors. With those 4 great results during the summer, the Blue Thunder guys finished on a strong 3rd place in the Dutch Championship point standings in the end.
After the short winter break, the next victory followed at the indoor pull in Zwolle, the Netherlands.
But after the pull in Zwolle, the whole team around Jeroen and Derk decided to step out of the limited super stock division and make the step into the big super stock class. That decision was made because of the less competition in the new limited super stock class at that time and the team wanted to have a good competition for their New Holland machine. 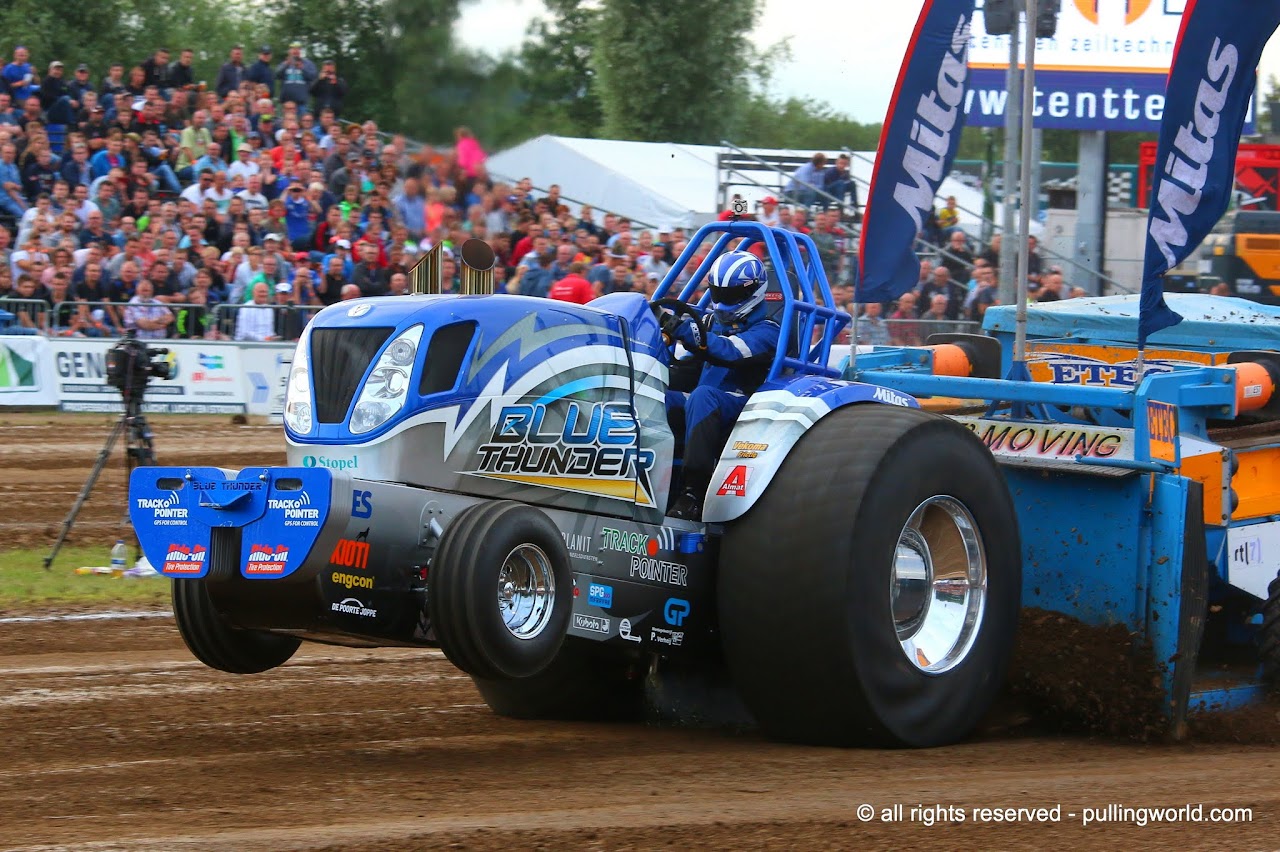 But before they could compete on the level with the big boys in the Netherlands, the limited super stock needed some changes. The 7.6l Ford Powerstar engine was replaced by a 10.5l 6 cylinder Cummins engine with 4 billet Holset HX82 turbochargers on alcohol fuel, the set of polished aluminum rims with the Firestone 24.5x32 Puller 2000 HP tires were replaced by a set of new polished Keizer aluminum rims on cut Firestone 30.5x32 Puller 2000HP tires and some many more changes were made on the rearend.
At the beginning of the outdoor season, they still started with the 7.6l powerplant because the much bigger engine wasn't ready yet. The Cummins engine was finally ready to run before the Beachpull in Putten during the summer of 2016. During these 4 years in the super stock class, the Blue Thunder was always to find in the midfield, but sometimes also on the top of the scoreboard in the competition in the Netherlands. 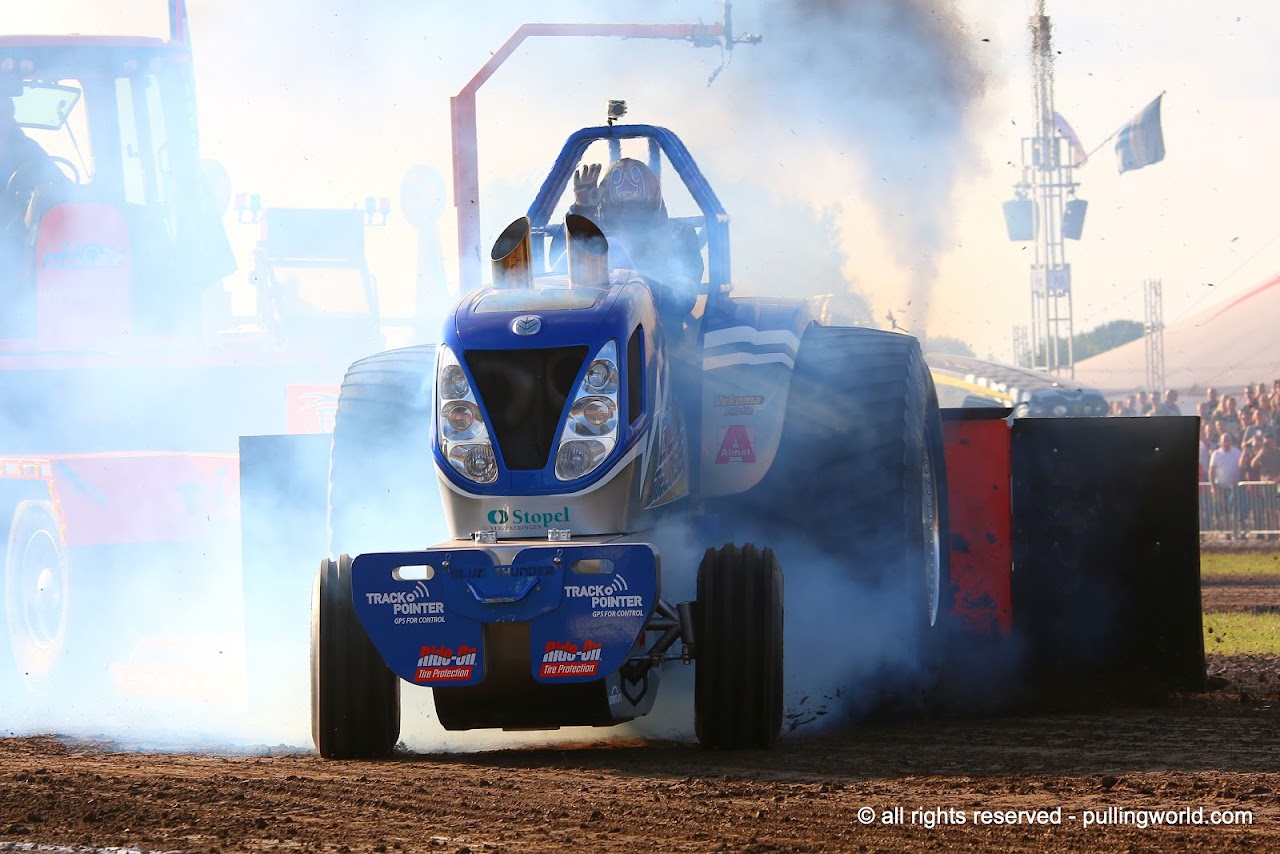 Another important moment was, 2 of their 3 wins in the 3.5t / 7700 lbs super stock division were achieved on their home soil in Lochem. The Blue Thunder Pulling Team had its last appearance in the super stock class at the indoor pull in Zwolle at the beginning of the year.
On July 16, 2020 the Dutch team announced on their Facebook page to stop with tractor pulling with this statement: 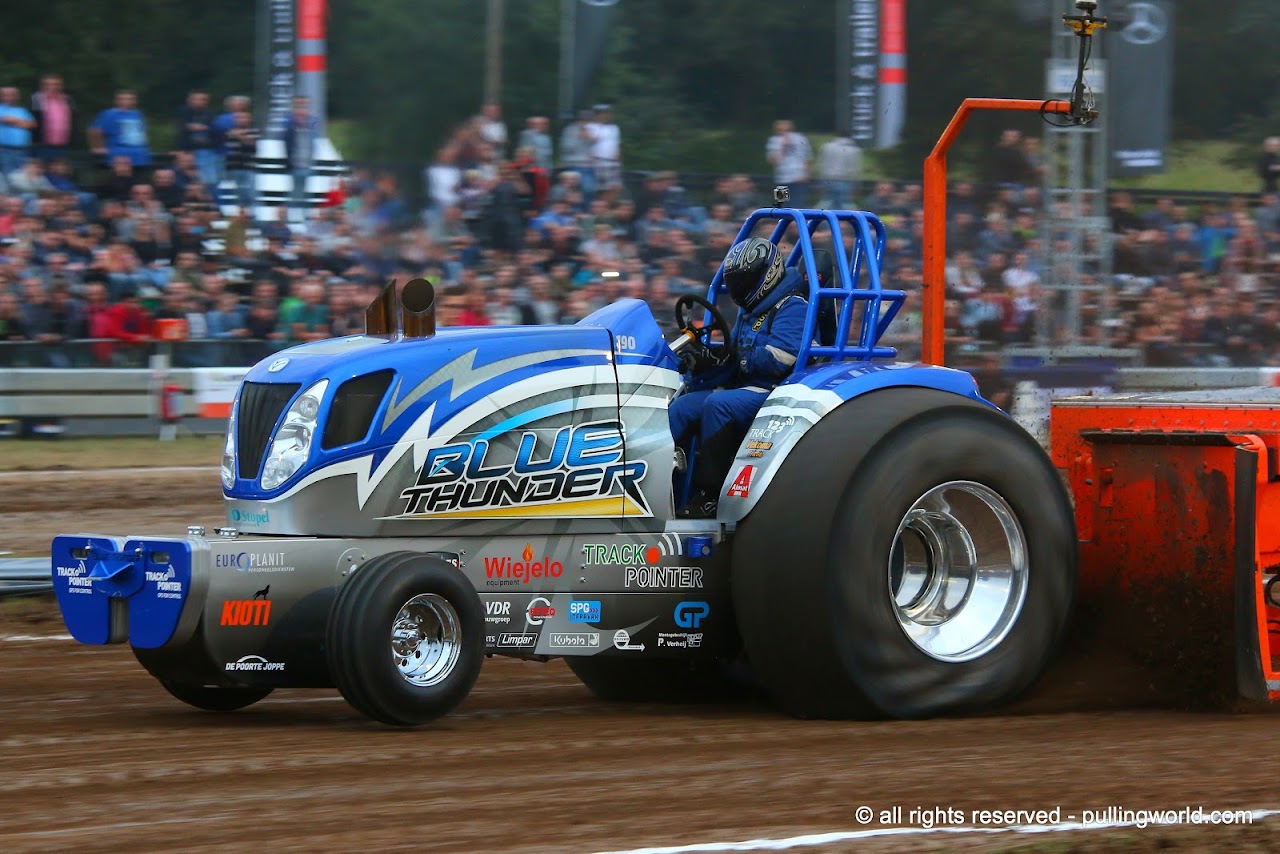 ''After many years of activity in various divisions, we have decided with pain in our hearts to stop with tractor pulling. In order to participate in the top, our available budget has become an unfeasible situation. In recent years we have had depth points but also many beautiful highlights such as 3x chosen as Puller of the Year in 3 divisions. We will never forget the victories at our home competition in Lochem with all our fans.
We would like to thank the NTTO, competition organizers, fellow teams for the great cooperation.
We would also like to thank all our sponsors, family and team members because without that support and help it would have been impossible.
We wish you all good luck.'' 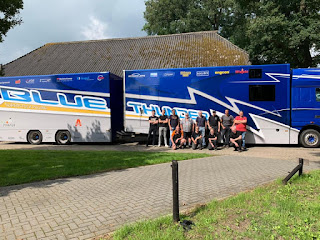 But what will happen now with their nice New Holland component super stock machine and their almost new transport vehicle?
The whole transport vehicle is already in new hands. The DAF semi-truck with the trailer was purchased by the ''The Judge Pulling Team'' from Ijsselmuiden in the Netherlands which have the twin Rolls Royce Griffon V12 powered machine for the 3.5t / 7700lbs modified class.
The New Holland T7 270 component super stock tractor is currently still for sale.

We would also like to give a big thanks to Jeroen Jacobs, Derk Willems and the Blue Thunder Team for their support with information for the pullingworld website during the last years and wish the whole Team good luck for the future!!!
We have really appreciated that!! 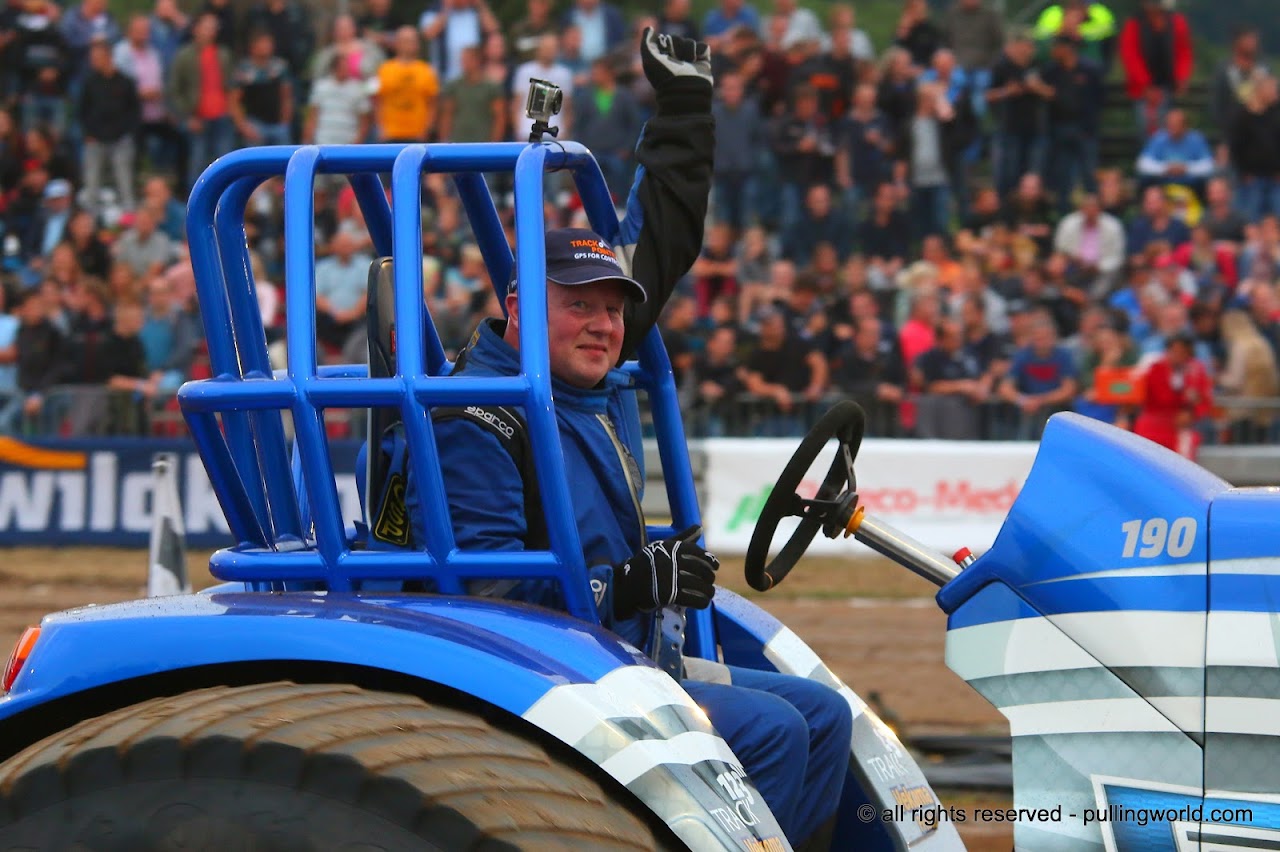 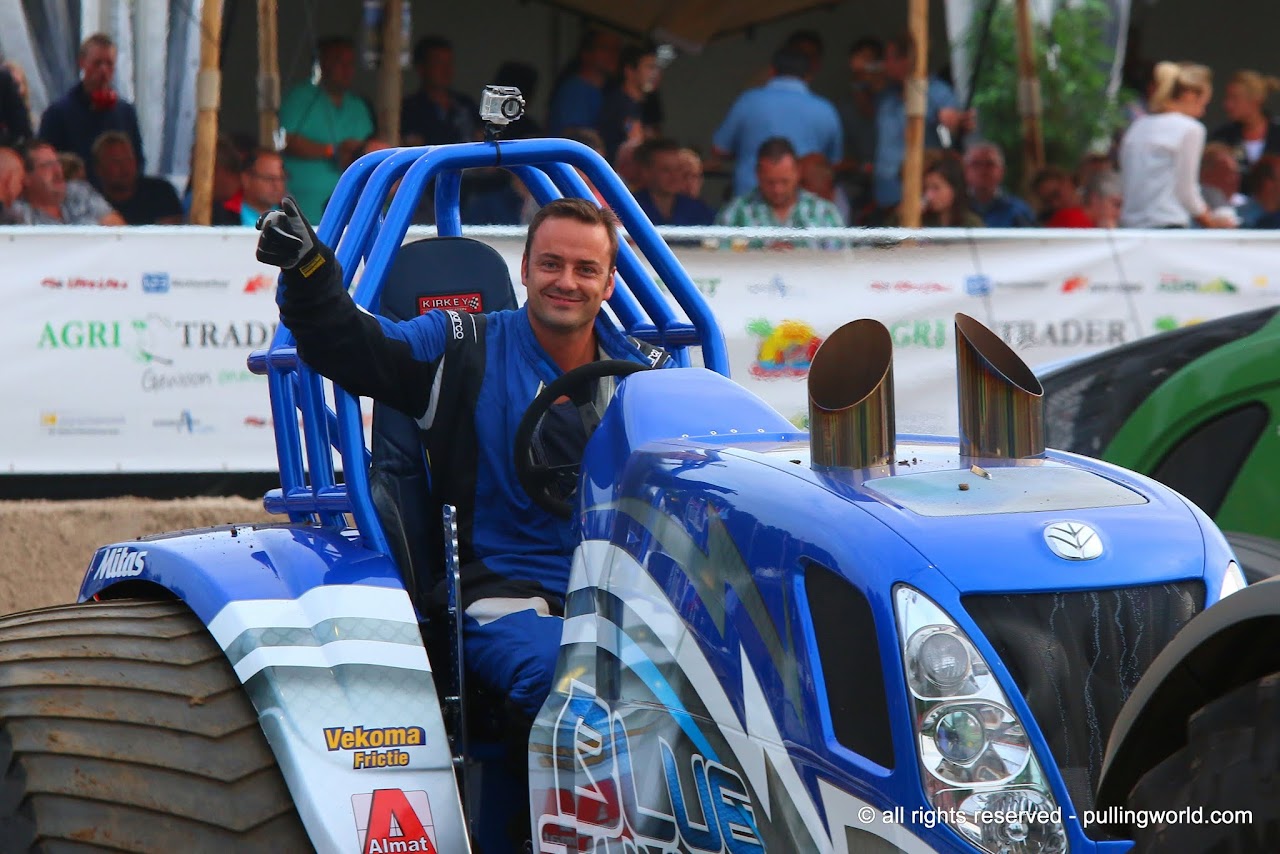 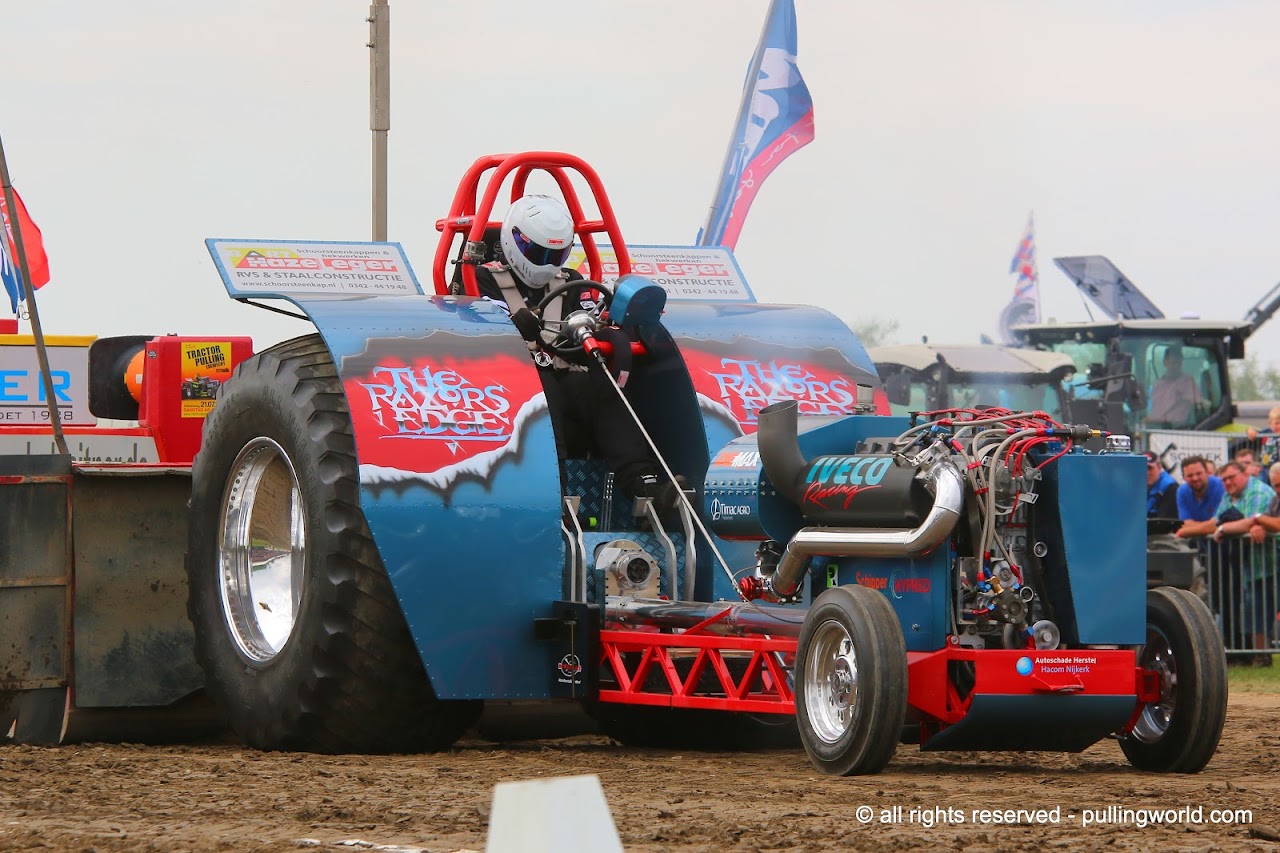 The 5500lbs / 2.5t light modified tractor called ''Razors Edge'' of Herman Staal from Voorthuizen in the Netherlands was sold to Scotland. The machine was sold without the turbocharged 6 cylinder Iveco semi-truck alky burner engine to the Knight Rider Pulling Team around owner Chris Knight from Nairn, in Scotland.
Currently, the Scottish Team competing with a turbocharged Transmash V12 diesel-powered 2.5t / 5500lbs light modified tractor in the British Championship and on the pulling events of the Scottish Tractor Pullers Club in their home territory Scotland.
Chris and his Team have the plan to put their spare Transmash V12 engine in the workshop on the old Razors Edge chassis. The maiden run of the new light mod is planned for 2021. 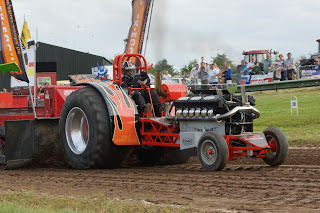